Praise Be, Ben Welch Is Bringing Pastrami Back to the Midwestern for One Day Only 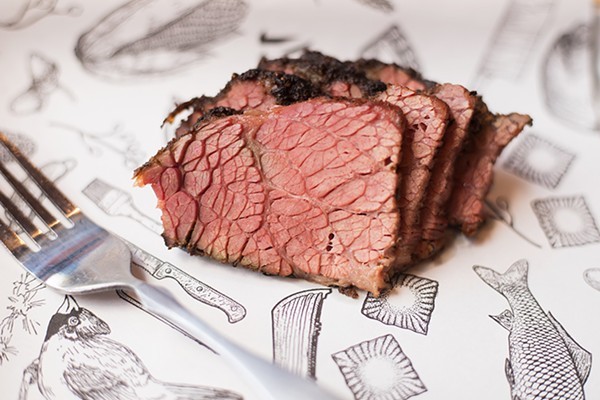 Ben Welch knows we all could use a little joy in our lives right now, and boy, is he getting ready to give us just that: In celebration of Cardinals opening day, the Midwestern Meat + Drink (900 Spruce Street, 314-696-2573) chef is bringing back his famous pastrami.

Yes, that pastrami. The pastrami that is seen as the St. Louis barbecue scene's gold standard of peppery smoked meat; the pastrami that has garnered legions of fans who have mourned its loss since it was taken off the menu as part of the restaurant's rebrand several months back. The pastrami that is the reason Welch's phone blows up, to this day, with texts from customers begging him to put it back on the menu.

"I have no idea what it is about this pastrami," Welch laughs. "I'd never done barbecue before Big Baby Q, so I don't know if it's the smoker or the homemade seasoning. I don't use a thermometer; I just take it off when it feels right. I don't know. I guess I just got lucky."

Welch first earned fame for his pastrami at Big Baby Q, the Maryland Heights barbecue shack he ran with his father from 2016 to 2018. After closing the restaurant, Welch moved over to the Midwestern in 2019, bringing with him his impressive barbecue prowess.

Since then, the restaurant's menu has evolved, shifting from barbecue-centric to more sports bar fare. Welch's pastrami was an unfortunate casualty of that change, but as he saw others jumping in to fill the void, he felt like he wanted to get back in the game.

"I see other people doing it, and I'm like, 'Let me get back in there,'" Welch says. "I'm kind of jealous, so I'm taking opening day weekend to tell people I'm still here."

Those looking for a taste of Welch's meaty handiwork have to act fast: The pastrami is only guaranteed to be available today. He teases that he might run it again on Saturday if the demand is there, but he won't commit to that for sure. One thing he is certain of is that it won't be on Sunday's menu, and he has no idea when he will run the special again. However, if the people keep asking for it, he's not ruling out another appearance.

"I will smoke it if they come," Welch says.