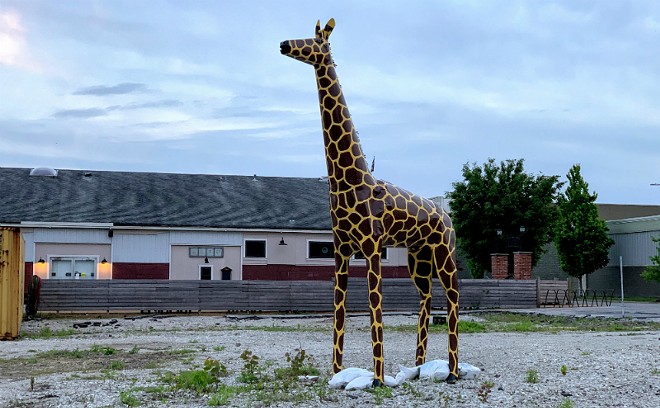 A week after it was kidnapped from its south St. Louis home, Civil Life Brewing Company's giraffe has been found.

Civil Life owner Jake Hafner tells the Riverfront Times he was alerted late this morning by police who told him the sixteen-foot-tall statue had been located in south county. The thieves, however, are still at large.

"This is just Stage One," Hafner says. "We still have to find whoever did this."

From what Hafner has been told by police, the crooks sold the giraffe, known as Peaches, to an unsuspecting buyer in south county. Once the man learned it was stolen, he called police. Investigators are now trying to trace the transaction back to the giraffe-nappers.

Peaches had been a fixture at the brewery, standing in the middle of a neighboring lot known as Jake's Dinosaur Park. It was once part of a collection of metal figures in the "park," but when a chain-link fence came down in March, Hafner moved the smaller creatures inside. He left the giraffe, reasoning that no one would steal a sixteen-foot-tall sculpture.

But on July 3, he arrived at Civil Life (3714 Holt Ave.) and immediately noticed Peaches had disappeared. Surveillance video from the brewery showed a white box truck pull onto the lot at 11:20 p.m. on July 2. Part of the scene was obscured by nearby shipping containers, but Peaches' head wobbles, and then she is lowered out of view before being loaded into the back of the truck. Another angle shows the truck driving south on Holt Avenue, the too-tall giraffe's head poking out of the back.

We reported the caper that afternoon, and media across the city and beyond soon picked up the case. Hafner's legions of craft beer fans joined in the chase, and he's been in full sleuthing mode ever since, fielding countless tips over the past week. One tipster, "Bria," forwarded a cell phone video she'd recorded the night of the high-crime heist. It shows a box truck barreling south on Interstate 55 near Butler Hill Road in south county, and a giraffe head is sticking out the back.

On social media, Hafner has kept up a steady drumbeat of warnings to the bandits.

"Imagine you are the Giraffenappers and all of a sudden you start to feel the pressure," he tweeted on July 7. "Who is that in that unmarked car? Is that a detective, are they going to knock on my door? Sweat appears on your forehead! TURN YOURSELVES IN!"

Hafner is now making arrangements to collect Peaches from an undisclosed location, a tricky operation, given that she is a life-size metal giraffe and he doesn't own a box truck. He's also working on plans to keep her safe in the future.

"I don't want the police to be running around after my giraffe again," he says. "I'd feel like a bad giraffe owner."

And he's hopeful the thieves are brought to justice soon.

He says, "No metal animal sculpture in this town is safe until we find the people who stole ours."