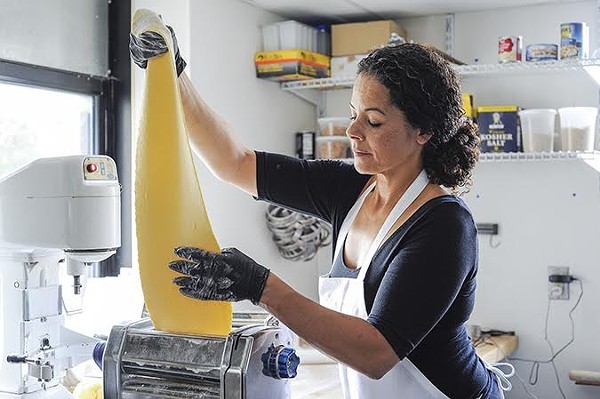 Toward the beginning of this year, Sharon Harter felt like she was in her groove. She was settled in to her job as pastry chef for Polite Society (1923 Park Avenue, 314-325-2553) and the Bellwether (1419 Carroll Street, 314-380-3086) following a challenging gig working for a corporate chef company. At Polite Society and the Bellwether, she was surrounded by old colleagues she'd previously worked with at Bar Italia, and she had a salary, health insurance and a great creative relationship with her managers. That's why it was so jarring when she was laid off.

"Everything was going great," Harter says. "I knew we were going to be affected when COVID hit, but it still came as shock when they let me go. I figured I would have my hours cut or move from salary to hourly, but Tom [Furtrell] sat me down, told me that I didn't have a job, to apply for unemployment and to plan for it to last about eight weeks. I took the news very calmly and didn't react because I was trying to process it. I cleared out all my stuff, went home and just sat on my couch in shock."

For Harter, the blow of unemployment landed so hard because of how much she loved what she was doing. Self-taught, Harter discovered her love of baking by making epic birthday cakes for her daughters, and she translated those skills into a fourteen-year-long job doing pastries for Bar Italia. She then went on to work for Scape, before leaving for a corporate chef job that had her traveling and working grueling hours. In need of a change, she found an opportunity with Polite Society and the Bellwether, where she felt like she was part of a family.

Unsure of what to do after being laid off, Harter sought refuge in baking, first as a way to occupy her busy mind and next in order to sustain her financially when her unemployment benefits were delayed. She didn't advertise her services, instead relying on word of mouth and private messages to potential customers, telling them that she had baked goods for sale. To her surprise, business took off.

"I did the only thing I know how to do: I cooked," Harter says. "I cooked like a mad woman. People were so gung ho about it, and they were so supportive. They gave me more than I asked for, which was really great. It turned out that I was making more money doing this than at my salaried job."

In addition to building her impromptu business, Harter has been furiously working on Bakers for Black Lives, the group she founded with her friend and roommate, Hannah Kerne. The idea, which grew out of a conversation the two had while grocery shopping, has evolved into a bona fide organization that has put on two events — with more in the works — and has raised more than $24,000 for local racial justice organizations.

"I had no idea it was going to turn into what it has, and it really fulfills something in me," Harter says. "I've always wanted to be of service, to contribute, and to be able to combine that with something I love, which is food, it's great."

Between her newfound baking business and Bakers for Black Lives, Harter feels like she has found herself in the midst of the COVID-19 crisis, even as she acknowledges that she is fortunate to be in such a position. It's given her the chance to slow down, tamp down her anxiety and reevaluate what she wants to do with the rest of her life. And even as she's returned to work at Polite Society and the Bellwether in a part-time capacity, the autonomy she's had doing her own thing has given her the push she needed to take a leap into the unknown.

"This has made me realize that I definitely want to go into business by myself," Harter says. "I feel like, before this happened, I didn't know how to have idle time without having anxiety. In the restaurant industry, it's easy to be in the kitchen all the time, but I found that I was operating at such a fast speed that I was always moving, but always trying to catch up. I feel like something has switched in my brain where I've never been busier, but I am more balanced. I don't know what the future is going to bring, but whatever it is, it's going to be because I made it happen."

Harter took some time to share how she's been dealing with the uncertainty brought about by the COVID-19 outbreak, how she maintains a sense of normalcy and what gives her hope during these difficult times.

As a hospitality professional, what do people need to know about what you are going through?
As for many people, these are very uncertain times. Nothing is more apparent than this with the hospitality industry, as it’s been turned upside down and become almost unrecognizable. With no guarantee of a living wage, much less a job, we are thrust into a frame of mind that many of us struggle to reconcile with.

What do you miss most about your job?
Seeing everyone. We have such a feeling of familiarity and family that suddenly not being able to have that as a daily part of your life is difficult.

What do you miss least?
Running from one thing to the next. There never seem to be enough hours in the day. Things always taking much longer than expected. Always having someone in the wings waiting for your time and energy.

What have you been stress-eating/drinking lately?
I don’t really stress-eat, but a nice bowl of ramen is like having a hug. Lol. Now stress drinking I do ... wine! A beautiful glass of bubbly rośe always makes me smile.

What are the three things you’ve made sure you don’t want to run out of, other than toilet paper?
Coffee ... wine and CBD oil. Lifesaver!

You have to be quarantined with three people. Who would you pick? Although I couldn’t ask for a better quarantine buddy, Hannah Kerne, and my daughters of course, I’d love Anthony Bourdain, Trevor Noah and my best friend from high school, Wendy.

Once you feel comfortable going back out and about, what’s the first thing you’ll do?
First thing I’m going to do when it’s safe again is go back to my “Cheers” spot, Brennan’s. God, I miss that place and all the regulars. I’m confident in speaking for all of us there. We are all a little lost without it. Lol.

What do you think the biggest change to the hospitality industry will be once people are allowed to return to normal activity levels?
The rise of pop-up dinners. Chefs will need to supplement their income, as well as people wanting a more intimate experience, and it's safer.

What is one thing that gives you hope during this crisis?
I’ve learned that, no matter what happens, I have been blessed with ability to cook. When the bottom drops out, I know that I’ll be okay financially. You really find out who you are when things get tough and you have to step up.