Jeff Friesen of Taco Buddha Is Ready to Serve Again 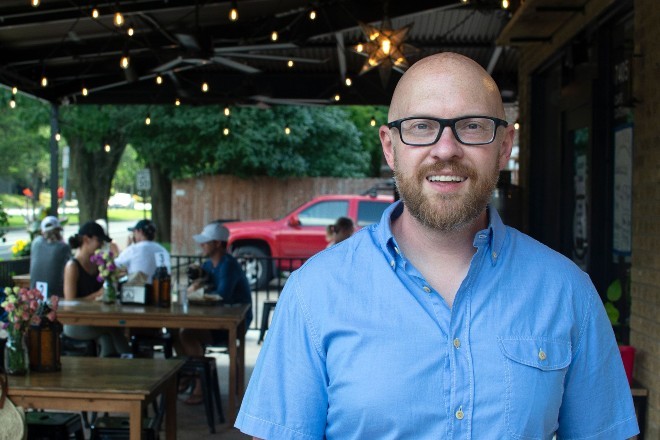 Jeff Friesen is the first to admit that learning how to run a restaurant in the midst of a pandemic has involved a lot of trial and error — even when he's thought he's gotten things down pat, they've had a funny way of showing him otherwise.

"Reopening a taco restaurant on Taco Tuesday during Cinco de Mayo was a mistake," Friesen says. "Before we'd closed down, I had I figured out Square and how to work with it for online orders, but while we were closed, they were on their game and had changed some things. When we reopened, I was overly confident. We opened online ordering at 11 a.m. and had to shut it down 45 minutes later, then reopened it, and then had to shut it down again. It was bad; we had to refund a lot of people because their wait was too long. The volume was just crazy — that's how hungry people were for tacos and margaritas."

Looking back, Friesen should have anticipated such a response to Taco Buddha's (7405 Pershing Avenue, University City; 314-502-9951) reopening. Since the restaurant first opened in 2017, it has grown to become a wildly popular neighborhood gathering place, earning a large following of regulars, some of whom patronize the place multiple times a week.

Though he brushes off such assertions, there's no question Friesen has played a role in the restaurant's success. In February of 2019, he joined the Taco Buddha team as executive chef, using his background in fine-dining to help owner Kurt Eller solidify the restaurant's reputation as a top-notch destination. Since he arrived, Friesen has been instrumental in creating Taco Buddha's signature menu offerings, training and developing the team and transitioning the restaurant to more environmentally friendly business practices.

He and Eller's efforts were paying off; in early March the restaurant experienced its best week of business, and the two were bracing for the upcoming outdoor dining season, which they expected would be huge thanks to the restaurant's new patio. However, as Friesen and Eller watched the news, they could see that the COVID-19 outbreak was about to be a significant event for the St. Louis area and that the way they did business was going to change.

"Ever since we started finding out about this, we've been really on top of things and looking at a lot of data — not just nationally, but locally," Friesen says. "Kurt has been getting data from BJC weekly on the number of patients and their best- and worst-case scenario projections. We're making decisions based on that and other strong data coming in. Really, it's been week to week, understanding what's happening."

By mid-March, Friesen and Eller had made the decision to transition Taco Buddha to curbside service only. A few weeks later, as the data became even more troubling, they decided to shut down the operation altogether. Through it all, Friesen and Eller have been communicating frankly with their guests, explaining not just their evolving policies and procedures, but the reasons that undergird them.

Now that Taco Buddha is open again for outdoor dining and carryout, Friesen is humbled by the outpouring of support he and his team have gotten from the restaurant's regulars. He's also thankful that the restaurant's business model was one that made it easier to weather the transitions that the industry is experiencing due to COVID-19. Though he knows things could change at any moment, he's happy that he and the Taco Buddha team are in a position to give their guests a bit of joy in such a fraught time.

"The hard thing about social distancing and self-isolating is that its contrary to most restaurants' business models of creating a place for people to come together and have an experience," Friesen says. "For us, it's important to give people the chance to get out, pick up the food they are familiar with and eat it at home. That's a form of entertainment, but we also want people to have the vibe of sitting on the patio, listening to music and having the full experience — it's so much more than the food. If we can do that safely, we're going to give that experience."

Friesen took a moment to share his thoughts on what it's like to be in the service industry at this particular moment and the thing that give him hope during in the midst of crisis.

As a hospitality professional, what do people need to know about what you are going through?
Please be patient with us. We are working really hard and putting a lot of energy toward making things safe for you and for us. Our job isn’t easy to begin with, but we love serving you.

What are the three things you’ve made sure you don’t want to run out of, other than toilet paper?
Coffee, but I work next to a coffee shop; tequila, but I work at a margarita factory; podcasts and audiobooks.

You have to be quarantined with three people. Who would you pick?
My two brothers, Charlie and Matt. I think we’d really get along well, unlike when we were young.

Once you feel comfortable going back out and about, what’s the first thing you’ll do?
Concerts! Nice Restaurants! Giving friends hugs!

What is one thing that gives you hope during this crisis?
People are kinder and more generous. That gives me hope.