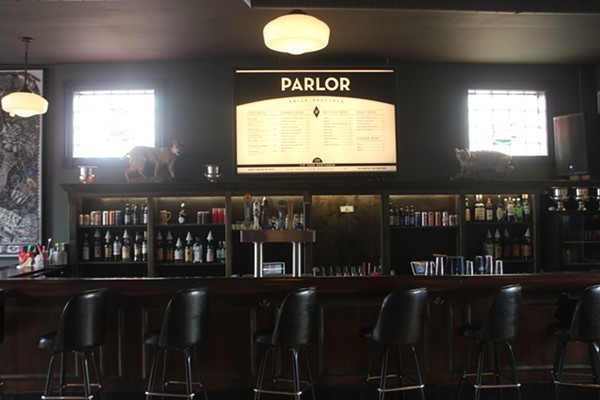 This article has been updated with a statement from Sean Baltzell, through his attorney.

Parlor (4170 Manchester Avenue, 314-833-4999), a popular arcade bar, and Takashima Records (4095 Chouteau Avenue, 314-571-9133), a new vinyl listening lounge, are temporarily closed. The Grove nightlife venues announced the halt to their operations yesterday evening in a statement issued to KMOV4's Alexis Zotos, who was the first to report the news of the closure.

Since June 18, Parlor has been the epicenter of a storm of sexual assault allegations lodged on social media against individuals involved with the businesses, opening a split between the partners. As of this writing, no one has been charged and police have given no indication whether an investigation is underway.

Parlor, which opened in 2017, is a partnership between St. Louis entertainment heavyweights Sean Baltzell, Mike Cracchiolo, Casey Colgan, Josh Martin and Casey Watson. (According to Cracchiolo, Watson is a silent partner with no operational involvement in the business.) In its two and a half years of operation, the bar has become a fixture in the Grove's nightlife scene.

The partners, plus Matt Leach, launched Takashima Records in February of this year, hoping to build on the success of its sister bar. Inspired by Japanese listening rooms, the vinyl-centric bar was recently in the process of temporarily reinventing itself into a ticketed, private-dining space in response to the COVID-19 outbreak.

The Riverfront Times has contacted several individuals with knowledge of the matter, all of whom have declined to go on the record due to the sensitive nature of the issues. However, several of the parties involved, including accusers and those with knowledge of the accusations, have used social media to comment on the events.

In a phone call on Monday, Cracchiolo said he and Colgan have had no operational role with the businesses since January and that he stands with the accusers.

"We were not aware of this sort of behavior until the events of the last few days," Cracchiolo says.

"We absolutely support victims of abuse, and we are taking these claims very seriously and taking action currently to investigate and bring about a just and appropriate resolution. On a personal note, there is only so much we can say openly at this time, but I don't want this to come off as lip service or a boilerplate response to these allegations. I hope that public will hold all of the ownership to account to take action. I would encourage all of our patrons to keep eyes on the situation."

Colgan echoed Cracchiolo's sentiment on Instagram last night, exposing a rift between Baltzell, Martin and the other partners.

"Wow, these last couple of days have been a depressing return to reality. As many of my friends know already, Ive been removed from operations at each bar in February of this year, but it is important that I express that I absolutely DO NOT condone the actions of Sean Baltzell or Josh Martin, nor do I agree with the actions that have been taken on the Parlor instagram page as it is run by Sean and his wife. I feel disgusted and ashamed that I have been associated with these people. In the years that I have spent in St. Louis, I have been witness to manipulative and reprehensible behavior, but I never imagined that it could have gone this far. Maybe I was too naive and blinded by my own personal goals to see it, but now that it is right here in my face, I have to speak out. I am actively distancing myself from these associates and will continue to do so while also working to aid and support the employees and victims. I am sorry to the staff and all of the kind people that have supported our business and helped it grow. I will not be removing any posts or editing my personal profile to hold myself accountable and so all can see that I have, unfortunately, been an associate of these people. I am disappointed in myself and I am beyond disappointed by Sean and Josh. Thank you to the victims for speaking out, as difficult as it was, and I hope this version of Parlor dies. Let it burn."


"In light of recent news, I wanted to publicly go on record about the allegations made about Sean Baltzell and Josh Martin. First and foremost: I stand with survivors and I vehemently stand against the silencing and harassment of survivors and allies looking to amplify their voices. As an individual with ownership/partner stake in several businesses with these men, I explicitly renounce their behavior. I would like to go on record that Sean has been operating Parlor’s social media accounts in response to these allegations singularly and of his own volition, and in no way, shape, or form do I support his reactionary actions that took place today. Myself and several remaining partners are working to cut ties with all individuals who have been named, and are currently mobilizing to take action to build a sustainable and safe environment for women, our employees, and any others who come forward. Please stay tuned for a way to do this, anonymously if preferred. I have seen in my many years of industry work just how insidious the environment can get. I take ownership of the fact that I have not done as much as I could have to eradicate how predatorial bar culture can be, and I am disgusted that it has been taking place in establishments I run by people I considered friends at one point. In the last year, I cut all personal ties with Sean as I became more cognizant of his abhorrent behavior and am working to cut business ties with him at this time. Please stay tuned for our action plan; please don’t be silenced. I see you. I hear you. I believe you, and my actions will prove just that."


Baltzell has issued the following statement through his attorney, Alexandra Hart.

"Sean supports the victims and their courageous decision to come forward and seek justice against anyone who engaged in misconduct.

In the flurry of activity on social media regarding allegations of misconduct in the Grove, Sean Baltzell was falsely and unjustifiably named by several of his business partners, and we are now taking the appropriate legal action against any role his business associates may have played in advancing these false assertions.

Sean has spent his professional life building strong businesses and a successful presence in the Grove and the community. He cares deeply about the success of the businesses and the community, which is why Sean intends to address these few dissidents who have maligned him, and at the same time he is taking action to work out an amicable resolution that will not distract from the day to day success of their businesses."


Regarding the current closure of the businesses, Parlor and Takashima Records' statement, signed by owners Matt Leach, Casey Colgan and Mike Cracchiolo can be read below.

"Takashima Records and Parlor do not tolerate harassment or abuse. We are fully committed to swiftly determining the legal course of action regarding the recent allegations against certain partners of our businesses. Operations at Takashima Records and Parlor are halted until further notice while we rectify this situation. We regret that we cannot speak further on this at this time."


This is an ongoing story, and we will continue to update as matters develop.