Bakers for Black Lives Returns Sunday for a Juneteenth Jubilee 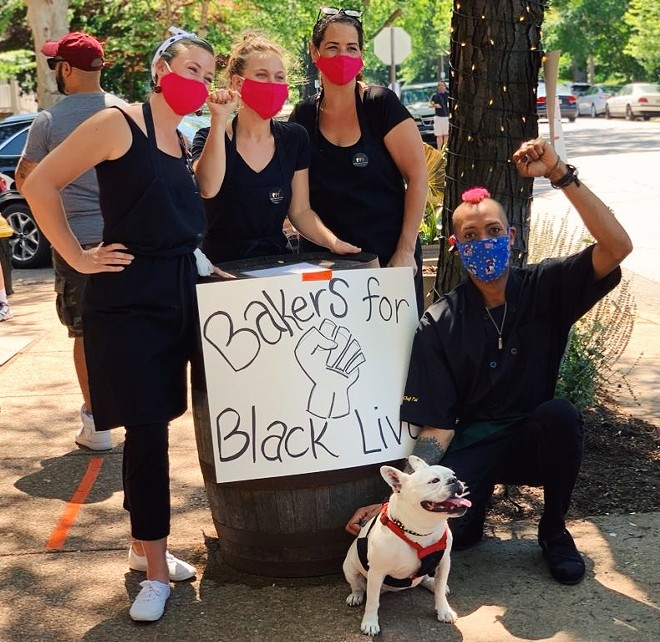 Sharon Asher-Harter and Hannah Kerne still cannot believe the response they've gotten to their event series, Bakers for Black Lives. Only a few weeks ago, they were grocery shopping and throwing around ideas about how two pastry chefs could use their skills to contribute to the fight for racial justice. Now, they are on the cusp of producing their second event — a celebration destined to be bigger than their wildly successful first outing.

The second Bakers for Black Lives bake sale will be held from 10 a.m. to 2 p.m. on Sunday. Vicia and the Cortex innovation district are hosting the event, which will feature more than a dozen vendors, including Indo, Balkan Treat Box, Sump Coffee, Simply Sweet Sensations, Clementine's Naughty and Nice Creamery and, of course, local professional and amateur pastry chefs. Proceeds from the event will be donated to Action St. Louis, a local charity dedicated to racial justice.

Billed as a "Juneteenth Jubilee," the celebration marks the second time Asher-Carter, Kerne and several of their pastry chef colleagues have united for the cause. Their first event, held on June 5, was so successful that it sold out in less than two hours, raising $14,000 for ArchCity Defenders and other racial justice organizations.

Asher-Harter and Kerne are determined not only to match the success of their first event, but to exceed it — something they believe is possible thanks to the outpouring of support they have received from their restaurant industry colleagues. They hope that by setting up in a larger area with tents and booths (as opposed to a single-file line at the original event, held at the Vino Gallery in the Central West End), they will be able to serve more people and raise more money for the cause.

This weekend's Bakers for Black Lives event is organized around Juneteenth, the June 19 holiday that celebrates the end of slavery in Texas, which occured two and a half years after the Emancipation Proclamation. As such, it will feature a special Juneteenth table filled with goodies traditionally associated with the holiday, such as red velvet cake, strawberry desserts, tea cakes, sweet potato pie, banana pudding and cornbread. Asher-Harter and Kerne emphasize that only bakers of color will be contributing to the Juneteenth table.

Though Asher-Harter and Kerne are focused on pulling off the Juneteenth Jubilee, they are looking ahead to the future of Bakers for Black Lives. The pair have been in talks with ArchCity Defenders, Close the Workhouse, voter outreach groups and other racial justice-focused community organizations to develop an educational component to their efforts. They hope to partner with some of these groups on future events.

For now, though, Asher-Harter and Kerne are thrilled that they have another opportunity to lend their skills to help in the fight for justice — and they hope to empower others to do the same.

"We were inspired after the [first] event that maybe food can be the bridge that gives people the courage to civically engage," Kerne says.

For more information on the Bakers for Black Lives Juneteenth Jubilee, visit the event's Facebook page.