American Falafel Is Now Open in the Delmar Loop 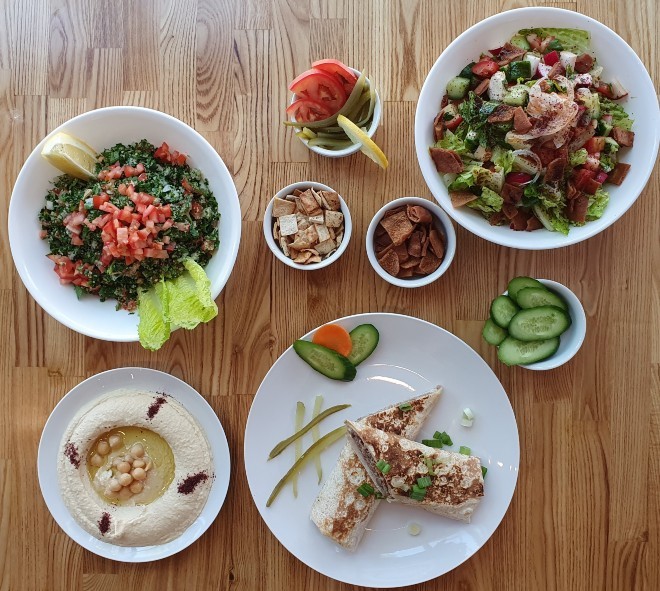 Mohammed Qadadeh can't help but laugh when asked why he would open a restaurant in the midst of the COVID-19 pandemic and social upheaval currently rocking the country.

"One taste of our food, and you'll know why I decided to open this," Qadadeh says.

For Qadadeh, his canned answer — something he's had to practice because he receives the question more times a day than he can count — is actually a tongue-in-cheek acknowledgment of the challenges facing him as he navigates opening his debut restaurant in the midst of crisis. The reality is that Qadadeh signed a lease on March 1 for the building that would become American Falafel — just days before the full extent of COVID-19's impact would reveal itself to the city's food and beverage scene. Feeling that he had gone past the point of no return, he had no choice but to forge ahead, opening May 30, roughly two months later than he had planned.

As Qadadeh explains, those two months are minor compared to the two years he has been dreaming of opening American Falafel. A former executive with MasterCard, the Jordanian native had been living in St. Louis since 1997, working at the company's O'Fallon (and prior to its move, Maryland Heights) location. His job required that he travel between Missouri and the Middle East, and when he was abroad, he took every opportunity to indulge in the cuisine he grew up on.

When he would return home to the U.S. following those business trips, he longed for the Middle Eastern food he experienced abroad. Eventually, that longing turned into a plan to open a restaurant of his own. He began to sketch out the idea for what would become American Falafel over the last two years, but his plans got a big boost about six months ago when he brought on a renowned Jordanian chef, Mr. Feras, to assist him with the project.

Qadadeh's passion, combined with chef Feras' 27 years of experience in cooking Middle Eastern cuisine, are now on display at American Falafel. The fast-casual restaurant, which is located in the former Racanelli's New York Style Pizza storefront in the Delmar Loop, features a variety of traditional Middle Eastern dishes such as hummus, shawarma, tabouleh and falafel. Nearly everything is made in house and prepared to order — even the tabouleh and fattoush are tossed right in front of the guests, and shawarma is grilled to order.

"I am very particular with Mediterranean food," Qadadeh says. "My motto is, if  I won't eat it, I won't serve it."

Qadadeh is so particular about food that he even imported equipment to make hummus and falafel from Jordan so he could get the taste and texture just right. He and chef Esra have also been developing recipes for the last six months so that they can be confident they have things exactly as they want them, and they have obsessed over every detail, including bread, which they get in fresh every other day from a Jordanian bakery in Chicago.

Since opening last Saturday, Qadadeh has been thrilled with the response. Though the COVID-19 outbreak has changed the way the restaurant business operates, he feels that American Falafel is doing as well as it can in the current environment. The restaurant offers takeout and delivery, has outdoor seating, and is taking every precaution for dine-in service, including special cleaning, capacity and table spacing protocols.

It's a challenge, but one that Qadadeh insists he is up to.

"My nature is pretty positive and optimistic, and I always try to find a solution for problems in life," Qadadeh says. "This is America, the land of dreams. We can figure it out."

American Falafel is open Monday through Thursday from 9 a.m. until 11 p.m. and Saturday and Sunday from 11 a.m. until 11 p.m. Currently, the restaurant is awaiting its liquor license but plans to have beer and wine available soon. To view the menu, visit americanfalafel.com.