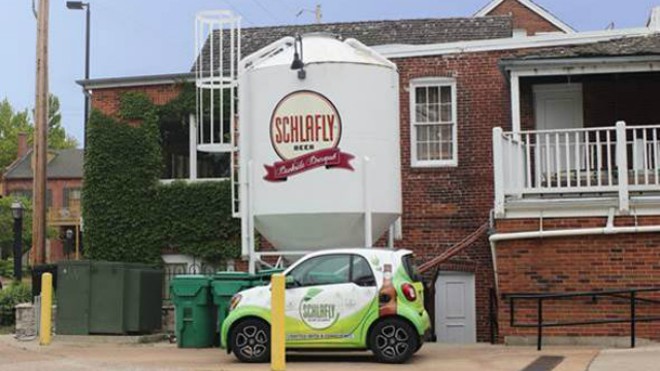 For Fran Caradonna, CEO of Schlafly Beer, the decision of whether to open the brewery's new St. Charles location amid the coronavirus-altered dining landscape wasn't too difficult. Since last fall, she and her team had been working hard on the purchase of the beloved St. Charles institution, Trailhead Brewing, and when the deal was finalized in January, they were full steam ahead on rebranding the brewery as Schlafly Bankside (920 South Main Street, St. Charles; 636-946-2739). As she sees it, they were already all-in, and there was no turning back.

"We were already committed at this point," Caradonna explains. "If they would've come to us in April rather than October, I don't know, but it turns out that starting something new has been a pleasant, positive thing for us to focus on. We've gotten such appreciation from Schlafly and Trailhead fans, and there has been such gratitude for us doing something new and taking a risk."

The excitement for Schlafly Bankside has been brewing since January 15, when the beer company officially took over operations of Trailhead in preparation for a rebranding of the 25-year-old Main Street mainstay. Though a temporary closure for remodeling was already scheduled for March, the shuttered doors took on a different meaning when the COVID-19 outbreak began hitting the St. Louis metropolitan area. In addition to spending the scheduled downtime redoing floors and freshening up the paint, Caradonna and her team had to figure out how to navigate the food and beverage industry's new reality, which included temporarily closing their other two brew pubs. Most importantly, they had to worry about their employees' health and safety.

"For me, protecting our employees is paramount," Caradonna says. "If our employees can't come to work, we are out of business, but also, I don't want anyone to get sick. It's really important that what we are doing provides a safe working environment. That comes first. Without that, we have nothing."

On May 22, Schlafly opened Bankside, as well as its Tap Room and Bottleworks locations, with the safety of employees and guests as its guiding principle. Though Caradonna says that in normal times there would have been a large grand opening celebration, that sort of revelry has been shelved. Instead of the throngs of merrymakers it planned to host, the brew pub is operating at 25 percent capacity with most of its business centered on outdoor dining. It's not the sort of opening day she would have envisioned back in the fall, but Caradonna feels thankful for the community's support as her team works through the challenges.

"The uncertainty and swiftness of this all is just a reminder that we are not in charge, are we?" she muses. "I used to tell the kids when they were younger that it's not what happens to you but how you respond to what happens to you. Right now, we just have to take a deep breath and put on our big girl pants to get through."