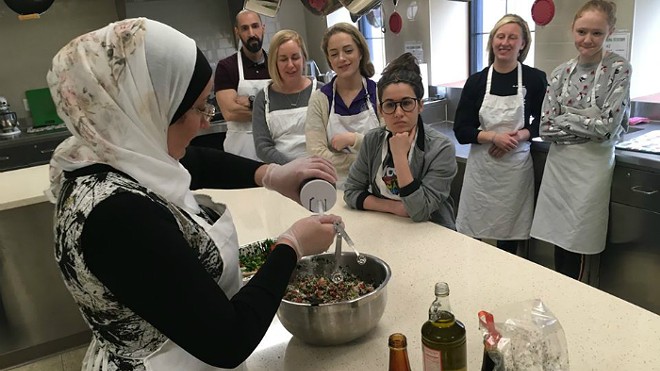 In 2016, Jessica Bueler was moved to start Welcome Neighbor STL after reading a Riverfront Times article about a horrible attack on Syrian teenagers that happened less than a mile away from where she worked. At first, her outreach consisted of a Thanksgiving toiletries drive, but over the years, it blossomed into a full-fledged organization that has helped numerous refugees in the St. Louis area get on their feet and become part of the community.

The Welcome Neighbor Supper Clubs have been the cornerstone of that community relationship. The event series, now in its third year, empowers refugee women to engage with their new neighbors — and even become entrepreneurs — by connecting them to St. Louis diners eager to learn about their culture and culinary heritage. At the supper clubs, guests gather around the table, listen to the women tell their stories and share food — the sort of thing that the COVID-19 outbreak has ground to a halt.

"We've had so much fun doing these supper clubs," Bueler says. "We were so sad when all of these events were canceled. I felt like the future of our organization was so bright and wonderful, then everything was shut down in an instant."

However, Bueler and the Welcome Neighbor team are not letting the virus stop their momentum. In place of the supper clubs, the organization is now offering online cooking classes, taught by the same refugee women who would normally be hosting the dinners, as a way to continue to foster connection and support the program participants.

As Bueler explains, the idea came about when one of the Welcome Neighbor STL board members heard about an Italian grandmother offering cooking classes from her home in Italy. She suggested the organization pivot toward online learning so that the refugee women it supports could still connect with others and earn money, while the pandemic makes in-person dinners impossible.

Bueler says that the idea is that the virtual classes will offer a lifeline to the refugee women who have come to count on income from the supper clubs. Since starting the dinners, the organization has raised more than $179,000 and has put on events as large as 180 people. Ninety percent of the money goes directly to the women — at some of the larger events, the women can earn as much as $2,000.

Virtual cooking classes are held via Zoom and cost $20 per participant. Before the class, attendees get an ingredient list and suggestions for where they can buy the items. During the session, the woman leading the class will give step-by-step instructions on how to prepare dishes, and Bueler follows up after the event with the recipe.

The first session, held this past Saturday featured Mawda Altayan, a Syrian refugee, demonstrating how to make hummus. Altayan is one of the program's success stories; after linking up with Bueler and doing the supper club events, she's garnered enough of a loyal following to launch her own catering company and has parlayed her experience into a few teaching gigs.

"One of the biggest problems for refugee women is isolation" Bueler explains. "They can earn a meaningful income through the supper clubs and now these classes."

The next virtual cooking class is scheduled for Thursday and will again feature Altayan demonstrating how to make hummus. Bueler says the organization has plans to offer a parent-child cooking class that will let participants learn how to make Middle Eastern-style grilled cheese and fresh juice kiddie cocktails. Requests from attendees for courses on preparing babaganoush, falafel and Arabic coffee are also being considered as future sessions. Bueler hopes the program can expand to feature refugees from countries other than Syria, such as women from Iraq and Burkina Faso.

Bueler says that the women who have agreed to participate in the virtual classes have been excited at the opportunity — their enthusiasm matched only by the response they've gotten from the community.

"Mawda is ready to do these every week," Bueler laughs. "It's great to see that and to also see how big this gotten already."