In All Sincerity, Good Luck Out There, Service Industry Workers 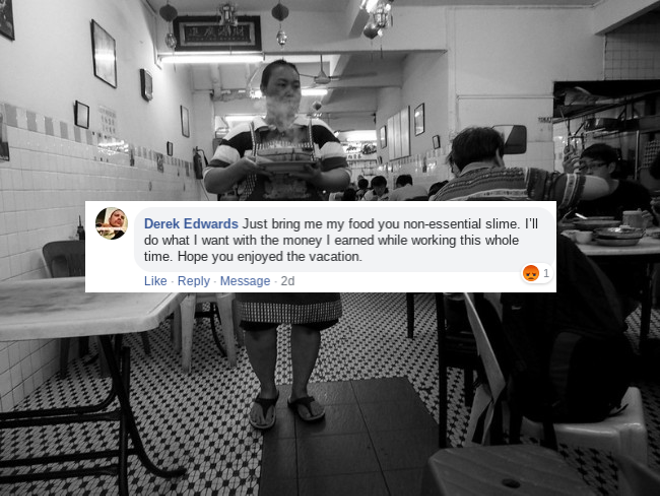 St. Louis city and county restaurants and bars open for business today, bringing many servers and bartenders back into the workforce after a weeks-long absence.

And while under normal circumstances this would be cause for celebration, the reality of the rolling dumpster fire that is 2020 is that bar and restaurant employees are being forced to work during a global health crisis as COVID-19 continues to spread largely unabated throughout the world.

This means not only increased risk for these workers, who will have to breathe customers' germs and touch their dirty plates, glasses and silverware, but also an increased workload as they're forced to police customers' willingness to social distance/wear masks and carry out increased sanitization measures in accordance with reopening guidelines.

On top of all of that, bartenders and servers will be dealing with a decrease in overall pay due to mandates that bars and restaurants operate at reduced capacity in order to help to slow the spread of the coronavirus. With capacities capped at 25 percent and requirements that tables be spread out six feet apart from one another, the sad reality is that service industry workers will be serving fewer guests, resulting in fewer tips — which often account for the bulk of their wages (most servers and bartenders make less than $5 an hour before tips).

In light of all of this, and because I personally spent about a decade working in the service industry in a previous life, I wrote a blog post last week with the headline "You Better Tip Like Your Money Is on Fire When the Bars and Restaurants Reopen." It made the case that, if you feel you absolutely must go to a bar or restaurant now that they're opening up again, you should plan on tipping extremely generously.

The article was well received by most industry types. But by customers? Not so much.

That's a real reply that was made in the public Facebook comment section of our story. And while that response is over the top to the point of trolling (I hope, anyway, because otherwise good god, man), a surprising number of commenters also registered their white-hot disapproval of what should be common decency.

Let's run down a few of those comments, shall we?

People who are being called back to work by their employers are no longer eligible to receive unemployment benefits, because those in power have decided that fear of catching a highly transmissible and potentially deadly disease is not an excuse not to go back to work. (Some of the more cynical among us might argue that one of the primary reasons states are in such a rush to reopen is to knock people off the unemployment rolls, consequences be damned.) So, essentially, these workers are being asked to choose between starving and getting sick. That's a no-win proposition no one should be forced into.

For those working off of tips, no, it absolutely is not enough that people are coming out to eat. Your server probably makes around $3 an hour. Could you feed your family, let alone yourself, on that income? Just keeping the business afloat means nothing if its workers can't afford to live. So yeah, tip super generously, or perhaps stay home and let someone who will take your seat in that limited capacity dining room.

You should tip more than you usually would because the people who are serving you are being forced to do so in extraordinary circumstances that require more risk and more work for less pay. The idea that "many" small businesses got a stimulus loan is way off (most who applied did not receive them) and, aside from that, there's little likelihood many are going to be willing to dole out raises when they are just barely hanging on after weeks of closure. Maybe you take the money you save during the next month you're not planning on going out (a fine plan, by the way) and use it to pay your servers and bartenders a little more when you eventually choose to do so?

Being put into a position to pay their employees more money just because you don't feel like tipping extra in light of extraordinary circumstances is not going to be helpful to these small businesses who will be struggling to make ends meet as it is. And while employers paying their employees more is not something I would ever argue against, the reality is that most of them will not be able to do so — at least not without jacking up their prices.

Sure, as stated, this is a great idea! Just be prepared to spend more money on your apps and entrees — and no complaining when you do. Remember, this is what you wanted.

Then you better be prepared to adjust your expectations of what "good service" is, because these employees are going to be working extra hard due to the new safety protocols put into place. Your food and drinks will take longer to arrive, your server and bartender will be more stressed, your dining experience will not be the same as it was in pre-virus times. Act accordingly.

The number of people currently unemployed in the United States is around 22 million — at present, jobs are scarce and competition for them is fierce. Your "find a different job" solution is not a very good one.

This guy apparently doesn't think he should tip at all unless service is up to his exacting standards. This guy is exactly the type of person I was talking to when I suggested in that last article that people should stay home if they don't plan to tip well. No one will miss you, man.

And just in case these callous responses to simple plea for human decency have not disheartened you enough at this point, go back and look at the number of "like" and "love" reacts the comments received. Or maybe don't — it'll probably be better for your sanity.

In sum, it makes for a pretty bleak outlook for the financial future of many of our fellow citizens. But, luckily, there are some out there who agree that service industry workers should be tipped generously right now. Notably, one of those people is Mayor Lyda Krewson, who apparently also thinks that you should tip like crazy since people in the service industry are being forced to work during a pandemic:

Now, if only there was something she could do about this situation......