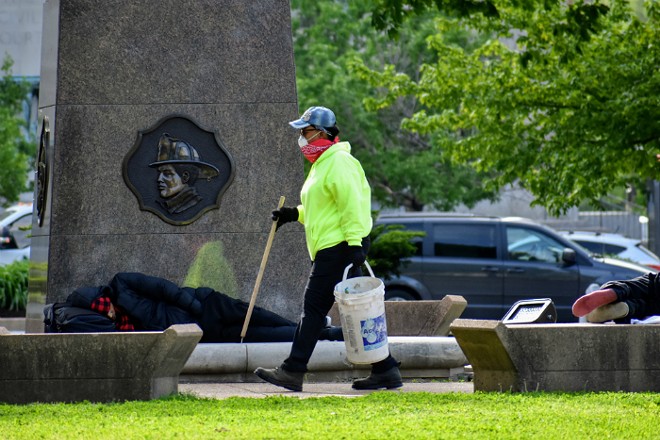 A woman who sued the City of St. Louis to avoid eviction from downtown tent camps is dropping her lawsuit.

ArchCity Defenders, a public interest law firm representing 39-year-old Ranata Frank, announced this morning it was dismissing the suit, given that the city has already cleared the camps and Frank now has temporary housing.

For weeks, as many as 50 people lived in a pair of camps along Market Street, west of Tucker Boulevard. After multiple attempts to get people to leave, the city issued an eviction order for May 1. ArchCity sued in federal court that morning and sought a temporary restraining order to block the evictions.

U.S. District Judge Sarah Pitlyk ruled in favor of the city in an order that was issued the next morning, a Saturday, and the city cleared away the tents that weekend. In court, the city promised to put anyone who was interested in hotels. The majority of people were placed in hotels or shelters, but ArchCity says several stayed in the park without their tents or wandered off into the city because beds weren't ready — a claim the city disputes. Others were moved into group spaces, not the individual rooms that were promised, ArchCity says.

“The rush to close the Market Street encampments before adequate shelter, services and medical outreach could be arranged demonstrates how the encampment closures were never about public health or safety,” ArchCity attorney John Bonacorsi said in a prepared statement. “Rather, the City’s conduct shows that it will invest significant resources to remove unhoused individuals from the public eye but refuse to make the same investment to provide shelter and services to meet the needs of St. Louis’ unhoused community.”

The city had argued the camps were a danger to public health as it tried to slow the spread of COVID-19. A spokesman for the mayor told the RFT after the judge's ruling that anyone who wanted shelter was accommodated.  In denying the restraining order, Pitlyk said the the "public interest heavily favors the city's ability to take steps to prevent the spread of this deadly disease."

Even without the restraining order, the lawsuit was still in play. One of the issues revealed during a hearing on the order was that the city health director Dr. Fredrick Echols, who issued the eviction order, is no longer a licensed physician, despite testifying that he was. The surprise revelation was first reported by the St. Louis Post-Dispatch after city attorneys filed a motion to correct the "misstatement."

ArchCity had initially said it would need to research how that would affect the suit. In a news release this morning, the firm said it remains a concern.

"Although ArchCity does not intend to question Dr. Echols’ professional qualification in this matter, Dr. Echols’ misrepresentation, in conjunction with other false promises by City employees, raises serious concerns about the willingness of City officials to make false statements for political expediency," ArchCity said in the statement.

Pitlyk had originally scheduled a May 12 hearing in the suit, but the camps were already long gone by then.