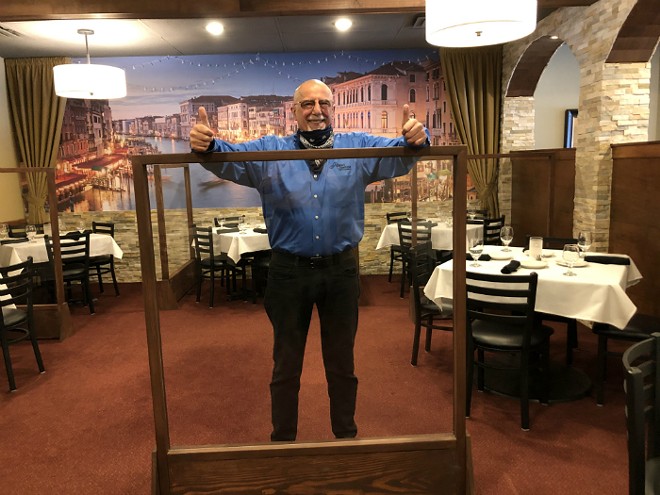 In March, as the coronavirus swept the legs out from under their businesses, restaurant owners scrambled to figure out new strategies. Allow takeout? Switch to delivery? Try the new curbside trend?

Roberto Zanti, owner of Roberto's Trattoria & Chophouse (145 Concord Plaza, 314-842-9998), shut down as he tried to figure out his next steps. His popular south St. Louis County eatery offers mid-priced fine dining, a white-tablecloth atmosphere and attentive service with the charismatic Zanti at the center. Reservations are recommended.

It wasn't the type of place that could easily pivot to curbside pickup. "Sandwich places, pizza, yeah, no problem," Zanti says. But it was a bit more complicated for places such as Roberto's.

The restaurant did reopen for curbside last week — thanks to a Paycheck Protection Program loan through the federal CARES Act, he was able to retain nearly all of his twenty-plus employees — but Zanti has been thinking longer term over the past two months, and he's preparing to reopen on May 18 with a new feature. Through much of the restaurant, diners will now find themselves separated from neighboring tables by plexiglass panels. Same for the bar, where dividers are spaced two stools apart.

Dine-in restaurants are among a limited number of businesses that St. Louis County and city will allow to reopen on May 18. There will be caveats: Employees who serve the public will have to wear masks, for example, and the county is capping the number of diners at 25 percent of capacity. But even though restaurants will have the legal clearance to open their dining rooms, making customers feel comfortable enough to not only eat their food, but actually sit inside and enjoy a meal is trickier.

Zanti says he ordered the dividers back in March, even before grocery stores were installing plexiglass walls in checkout lanes to separate cashiers from customers. He wanted them to look nice while being practical and easy to clean. They're framed in wood that is stained to match the rest of the place. At a cost of $750 each, they're also a recognition that nothing is going to be the same for a long time.

To that end, he has also installed hospital-grade air filtration systems. A native of Italy, Zanti says his brother lives in Milan, where COVID-19 hit particularly hard. Zanti's nephew caught the virus and has since recovered. The longtime St. Louis restaurateur expects extra safety measures will be a part of the industry for a long time to come.

"Unfortunately, yes," he says. "Even if they come up with a vaccine, which is what we need, how long is it going to be before everyone gets vaccinated?"

The dividers and other extra steps he's taken aren't required by the county, but he's hoping other restaurants follow his lead. (He recommends the company that made his, More for Less Remodeling, to anyone who's interested.) The speed with which the coronavirus closures changed the industry surprised everyone, but he says he has got to make plans for the new reality of running a restaurant with the virus still at large.

He's pulled a lot of chairs out of a place that normally seats 125 and will prepare for dinner service under the county's 25 percent capacity rules. Roberto's still recommends a reservation.

"I'm predicting we're going to be really busy by the number of phone calls and emails," he says, adding, "From myself to the bussers, we're all looking forward to getting back to work."