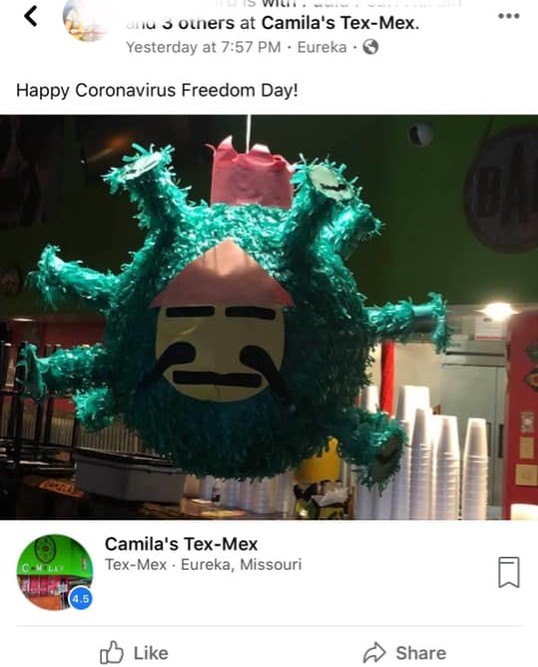 A restaurant in St. Louis county is facing a wave of criticism after photos surfaced on social media depicting a racist piñata hanging in its crowded dining room on May 4. The owners of Camila's Tex-Mex, located in Eureka, have removed the restaurant's Facebook page from social media following the intense backlash.

According to the customer who originally posted the photos to Facebook, employees allowed people into the restaurant Monday night due to poor weather conditions, despite the fact it is located in St. Louis County and therefore remains under lockdown orders that prohibit dining in. The photos show a complete lack of social distancing, with at least fifteen people, some of them children, crowded around two tables in close proximity to one another.

The photos show something else as well: a piñata, shaped like coronavirus, featuring an Asian caricature sporting a conical rice-paddy hat and Fu Manchu mustache. A Google image search shows that such piñatas have apparently become somewhat popular in recent weeks. 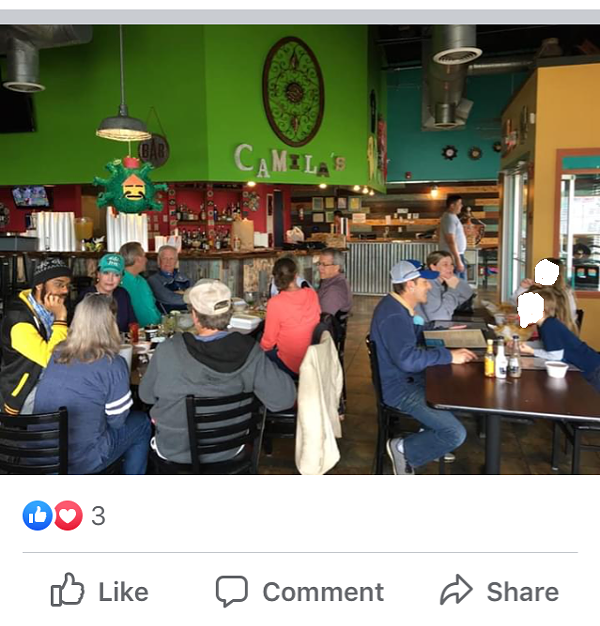 "Big thanks to Camila's Tex-Mex for letting us come inside since it was raining tonight," the customer wrote. "The service was A1 and the food was amazing! Thank you to everyone who joined us tonight🙌 #TakeTheCityBack."

Since the photos surfaced, the backlash has been fierce. The owners of the restaurant pulled their Facebook page on Wednesday afternoon after getting a slew of angry comments and negative reviews — but not before defending the piñata in a private conversation that was also screen-grabbed and disseminated across social media.

The restaurant's Yelp page has also seen an onslaught, with many posting one-star reviews and decrying its actions.

"Xenophobia doesn't have to be accepted. Do not support," writes James B. from St. Louis. "There's no way to explain this away. It's a pandemic, not a joke. Respect the guidelines. Supporting this restaurant is being complicit in their actions."

"What type of management (or lack there-of) would approve of this? In what world would this piñata depicting Asian stereotypes be acceptable? Complete lack of professionalism," writes Kathy U. of St. Louis. "This is pretty tone death considering everything going on in society right now. Insensitive and ignorant."

"I am always up for supporting local restaurants. I will however, never ever support a kind of establishment that allows racial discrimination to be a part of humor and decor," writes Bonnie L. of Affton. "Come on, a virus piñata with depicting Asian caricature? The owners of this place should be ashamed of themselves. I will never feel comfortable bringing my family here. Support local but not this place."

According to the Anti-Defamation League, assaults and harassment of Asian-Americans have increased in the months since COVID-19 hit the United States, with those of Asian descent being told to "go back to China" and being blamed for the virus. The ADL says further that Asian-Americans have been spat on, berated with racial slurs and even physically assaulted since the crisis came to our shores.

On Wednesday afternoon, St. Louis County Executive Sam Page released a video blasting coronavirus-related racism. In the video, he says members of the county's Asian-American community have reported being targeted for abuse since the virus' outbreak.

"Hate is a direct attack on the whole community's health," Page said.

An employee at Camila's Tex-Mex who answered the phone on Wednesday afternoon said that there was no manager on duty at the time, and to try back after 5 p.m. Multiple calls by RFT after 5 p.m. were not answered, and the restaurant's voicemail was full. An email sent to the address listed on the restaurant's website on Wednesday afternoon did not receive a response by press time.

[Correction: An earlier version of this story claimed that the photos were taken in the restaurant on Tuesday night. They are actually from Monday night. We regret the error.]