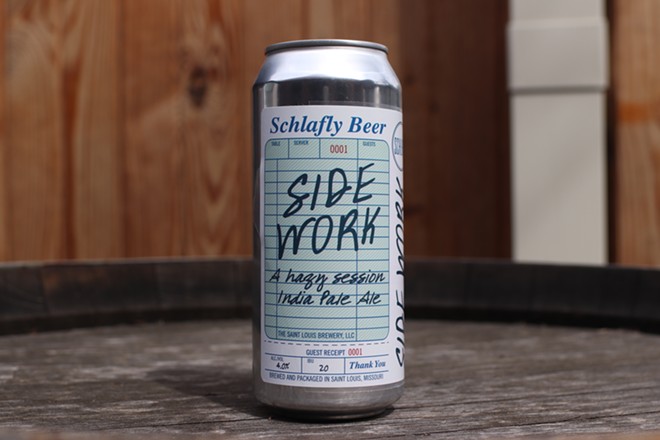 For Schlafly Beer's (multiple locations including 2100 Locust Street, 314-241-2337) lead brewer, Jared Williamson, the soon-to-be released Side Work is much more than a beer brewed to benefit the hospitality industry; it is a labor of love — literally.

"This is a very personal story for me, because this was originally brewed to be our wedding beer," Williamson explains. "Our wedding was going to be this Saturday, and we brewed it about a month out, but at that point, things started unfolding so quickly, and we looked downstream and knew that the wedding that we'd been planning for over a year wasn't going to happen. It's a bummer, but considering we, as a nation and a world, are facing such an uphill battle, there are so many bigger concerns to deal with."

Williamson and his fiancée, Kelsey Donovan, were set to wed on Saturday, April 11, in a ceremony that would have brought together their friends and family from across the country. However, as the extent and severity of the COVID-19 pandemic became clear around early March, the pair knew that they had no choice but to cancel, even before the city's stay-at-home orders mandated such a decision.

Now, they are turning that disappointment into an act of service, releasing their wedding beer to benefit the St. Louis hospitality community. The Hazy Session IPA, dubbed "Side Work," will be released on Friday, April 10th with all proceeds going to the Gateway Resilience Fund.

Williamson and Donovan met several years ago thanks to Schlafly; he was a Louisville-based brewer who'd traveled in to St. Louis to participate in one of the brewery's beer festivals, and she was a bartender at Schlafly's Bottleworks location. They hit it off instantly, and after a long-distance relationship, Williamson decided to move to St. Louis to be with his love.

It made sense, then, that Schlafly would play a significant role in their wedding, and the couple knew that one of the best ways to pay homage to their relationship was to brew a beer for the event that would have special meaning to them.

"There's a story to every ingredient in this beer," Williamson explains. "First, it's a session IPA, which is hop-forward but low-alcohol, so our guests would be able to drink all day but not bee too loaded to dance all night. As far as ingredients, I liked the idea of two things coming together as one — two different malts, two different hops."

As Williamson explains, the malt, made from both barley and oats, is from Simpson's Malt, one of the oldest family-owned maltsters in the United Kingdom. As for the hops, he chose Strata, to represent himself, and Enigma, to represent Donovan, while the yeast is a strain from Vermont, representing the hazy IPAs they drank together on their first road trip to the Northeast. Those components, coupled with good-old St. Louis water, mix together to make a brew that is uniquely personal to them.

There was no way, then, that Williamson and Donovan were going to let the beer go to waste. In fact, knowing that they could use it transform their disappointment about their nuptials into a way to help those in the hospitality community suffering income loss has been a way for them to turn their negative into something positive.

According to Williamson, they just might keep that positivity going well after the first batch of Side Work is sold out. As he explains, the notion of having a beer that helps the community is something he and the Schlafly team are now considering as an ongoing philanthropic effort. That their postponed wedding is the catalyst for such a movement is a welcome outcome of a disappointing situation.

"We're really excited to have a beer like this where we can give back to the community," Williamson says. "Maybe one day the industry isn't in such dire need and there are other ways we can give back. Maybe that's what we can become in the future. As we've been saying during all of this, Schlafly is more than the beer we make, and now it's time to prove it."