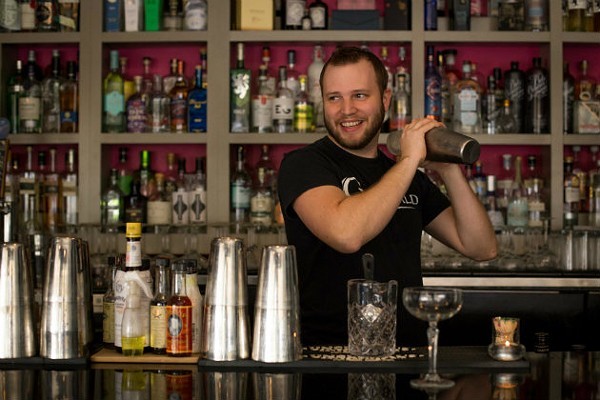 On February 27, Dale Kyd was riding high on the wave of unbelievable professional success. Gin Magazine, an international publication considered the authority on the spirit, had just named him its 2020 Bartender of the Year, an honor that seemed unachievable just a few years ago when he was an electrical engineering student at Mizzou. His leap into the service industry, it seemed, had paid off.

"This was a big deal for me — the guy who got honorable mention is a god of bartending at this really cool bar in London," Kyd explains. "The distiller of Beefeater got inducted into the gin hall of fame in the same ceremony, so it was a huge deal for me to be included with my idols and people I have such huge respect for. I really felt like I was coming into my own and got to enjoy that for about two weeks. Then this all put a halt to it."

The "this" Kyd refers to, of course, is the COVID-19 pandemic which has wreaked utter havoc and devastation on the hospitality industry. One minute, Kyd was receiving international accolades for his work at the Gin Room (3200 South Grand Boulevard, 314-771-3411), the next, he was facing an uncertain future as the bar and accompanying restaurant, Cafe Natasha's, went to takeout-only service and eventually ceased operations indefinitely due to the public health crisis. Though Kyd is moved by how the owners, Natasha and Hamishe Bahrami, have gone out of their way to put their employees' needs before their own, it doesn't change the fact that he — and his fellow restaurant and bar colleagues — don't know when, or if, they will get to go back to earning a living doing what they love to do.

There are some business that are not going to reopen after this," Kyd says. "Cafe Natasha's will come back, but others won't, and that's terrifying. I don't know what bartending is going to look like on the other side of this. The talent pool is going to shrink, and artistic endeavors are going to get jeopardized. I think many of us are going to become risk averse. At one point, I had these skills that were transferable, and now, they don't seem like that so much. None of us are feeling safe in these fields anymore."

Income loss aside, Kyd is also mourning the loss of creative momentum that came from collaborating with colleagues, interacting with guests and trading knowledge with peers. Before the pandemic, he and his Gin Room co-worker, Michael Fricker, were experimenting with creative techniques for cocktails, like alternative acids and other unique ingredients. Not being able to work together in person has put a halt to their efforts, and his lack of access to the tools and ingredients he has behind the bar at the Gin Room has prevented him from continuing to push forward with taking his cocktails to the next level.

Kyd does not sugarcoat his feelings about the current situation: He is mourning the loss, no matter how temporary, of his job, his guests, his colleagues and his sense of security. Still, he remains heartened by his caring and compassionate employers and the level of cooperation and willingness to help he sees from fellow hospitality professionals, even as they, too, experience hardship.

"Having seen the industry as a whole come together over this and help each other out is such a good feeling," Kyd says. "It makes me feel like, regardless of what is going on around us, we have the resources together to make it through. That makes this easier to bear."

Kyd took a moment to share his feelings on what he's going through right now, the impact he feels this will have on the industry in the longterm and the one thing that is giving him hope in these difficult times.

As a hospitality professional, what do people need to know about what you are going through?
I want it to be known that the hospitality industry simply doesn’t run on high profit margins. We work tirelessly to compensate for very small variances in our numbers, and while a lot of places are still open for takeout, that is absolutely not supporting that restaurant’s staff. With very little warning, our income has dropped to zero for an untold amount of time, and that stress can be pretty overwhelming. I think the industry as a whole right now is scrambling to help each other with very few lifelines being thrown our direction from official bodies. We don’t really have anywhere to turn and the $1,200 that we might get isn’t a permanent solution. We are in the unique position that the best way to accelerate the healing process of this virus is to completely kill our own livelihoods, so we are very literally fucked if we do and fucked if we don’t. It feels bad.

What do you miss most about your job?
I miss interacting with people. I work at a bar where every interaction with guests is a chance to build a relationship over the course of their stay, and until that abruptly ended, I don’t think I realized what that really meant to me. The simple but great pleasure of getting someone a cocktail they’ll love into their hands has left a pretty serious void in my day to day.

What do you miss least?
Cleaning my tiny little apartment is so much easier than cleaning that bar. Between the rest of the team and I, we have a tendency to get pretty neurotic to the point of inefficient about how pristine our stations are kept. My home kitchen can go from spotless to Dale-cooking-disaster and back again in minutes flat.

What is one thing you make sure you do every day to maintain a sense of normalcy?
I’ve been working hard to keep some sort of a structured day. Being as easily distracted as I am and being out of work, it can be super easy for me to slide into a totally chaotic and lethargic mess. To combat that, I’ve been working to get ready for work like I would any other day and then engaging in an activity that’s on my feet. It can be really ritualistic, but it helps me retain that routine that I know I thrive on.

What have you been stress-eating/drinking lately?
There’s been a pretty inappropriate amount of stir-fry going through my apartment. For some reason the combination of a protein, some veggies and some noodles all fried up together with a super savory oily sauce is my top-tier comfort food. Between my ability to fumble around in the kitchen and make something passable and my proximity to Pho Grand (which is totally open for carry-out, by the way), I’ve been hitting it pretty hard.

What are the three things you’ve made sure you don’t want to run out of, other than toilet paper?
I won't be running out of London Dry gin any time soon. Cocktail hour has been a sacred time of day for me forever, and even though I’m an equal opportunity imbiber, London Dry is my constant companion. Second, I have two lovely cats that have been my besties since I was fifteen. I don’t want to age myself too much, but they aren’t spring chicks anymore, and they are very set in their ways, so if they don’t get their favorite cat food at the time that they like it, the world might catch on fire. I guess it sort of is anyway, though. Third, instant noodles. I try to eat healthy as much as possible, but I just love instant noodles so much. When the signal was coming down the line that we were probably going to have to shut ourselves in our apartment for a while, my partner and I went to Jay's International and loaded up on a rockin’ variety. They’re just a great snack. If you’ve never experienced the magic that is Ichiban brand noodles, then you have to get your hands on some. They’re number one in name and flavor.

You have to be quarantined with three people. Who would you pick? Well, I have the luxury of already being shut in with my partner, Jen, and that is really excellent. Our schedules are typically pretty out of sync, so the time together has been swell. A little extra time with my best friend, you know?   I’m really fond of this radio personality and podcast producer named Roman Mars. I feel like he is one of those people that can have really profound conversations and also take pleasure in pretty meaningless small talk, but either way his depth of knowledge is sure to make it interesting. Lastly, I think it would be a pleasure to hang out with comedian Tig Notaro. I really do enjoy comedy, and I am a big proponent of the power of laughter. I think she does a really good job not making jokes that are politically or socially charged (even though when she does they can cut deep) but delivering punch lines at no one’s expense. I have immense respect for that.

Once COVID-19 is no longer a threat and people are allowed to go back out and about, what’s the first thing you’ll do?
I’m probably going to pop down to Civil Life and drink beer and play games and hopefully pet some dogs. That sounds like a really killer reintroduction to normal life right now.

What do you think the biggest change to the hospitality industry will be once people are allowed to return to normal activity levels?
I think that this whole ordeal has kind of exposed some of the hardships that people in this industry face. I feel like this crisis has highlighted the opposite and dark side of what we see on shows like Chef’s Table, where talent and promise is met with success. There are some really amazing kitchens and bars in St. Louis right now that simply won’t be able to reopen on the other side of this thing. These people have worked really hard, and this isn’t just some gas-money job — it's a profession from front to back that has been getting a lot of disrespect for a long time. I think that void is going to be felt by a lot of consumers as acutely as it is being felt by the hospitality industry right now, and I think the outcome is going to be a little more respect for that work on the other side. Hopefully, at least.

What is one thing that gives you hope during this crisis?
Over the last week and a half, there has been a tremendous amount of support coming through for people who lost their income, and it rocks. It can be easy in times like these to be suspicious and spiteful and self-centered, but I can’t fight the feeling that St. Louis has been a great example of how to care for others. It’s really humbling, and I’m very grateful, and I’m very optimistic that, while none of us may come out unscathed, we will come out of this together and with a tighter-knit community.