This Shit's No Joke: Waffle House Closes 418 Locations Due to Coronavirus 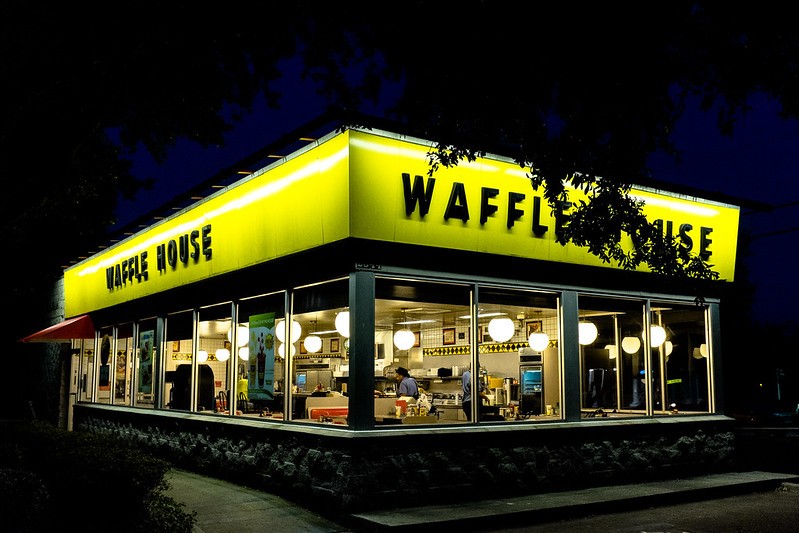 Waffle House, whose penchant for remaining open even in cases of natural disaster is so consistent that FEMA uses its rare closures to determine the severity of such disasters, has announced that they will be temporarily closing 418 of their locations due to coronavirus, including several in the St. Louis area.

As odd as it sounds, the so-called "Waffle House Index" is a tool used by FEMA to measure just how badly a natural disaster such as a hurricane or tornado has affected the community where the restaurant is located.

Former FEMA administrator Craig Fugate explained the line of thinking behind the index in a 2016 NPR interview:

"They are open most of the time. And that was the index. If a Waffle House is closed because there's a disaster, it's bad. We call it red. If they're open but have a limited menu, that's yellow," he said. "If they're green, we're good, keep going. You haven't found the bad stuff yet."


Eight of the restaurant's locations in the greater St. Louis area are marked "closed" on the company's official website, with nine remaining open.

We called the Berkeley location in St. Louis county, where an employee confirmed that the store was indeed still open, but is now operating in a take-out only capacity. Asked if the restaurant had seen a dip in business since concerns over COVID-19 had led to government-mandated stay at home orders, the employee said it has not.

"Not really," he replied. "Seeing my regulars still come in. They just get it to go."

In other words, if you absolutely must get your Cheesesteak Melt Hashbrown Bowl fix, you have options. But considering the Waffle House Index is currently flashing red, you might also consider taking caution — and taking this COVID-19 stuff very seriously.

Daniel Hill was the RFT's music editor until he was laid off last week, and now he just refuses to leave. Follow him on Twitter at @rftmusic.