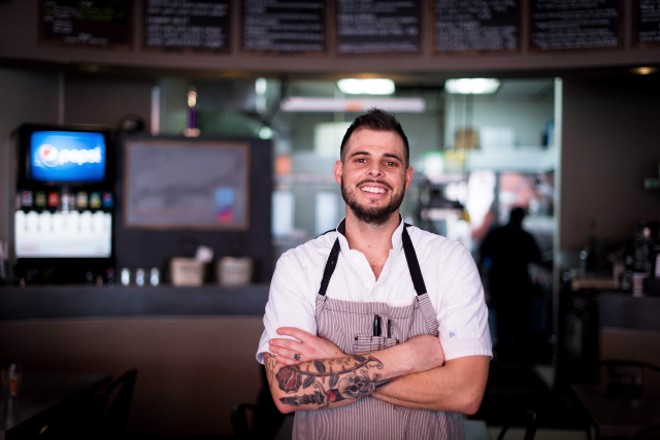 Growing up, Andrew Simon was a talented athlete — so much so that he assumed he’d go on to play professionally one day. However, the moment he got his first job cooking, he felt for the first time in his life like he was being pulled in a different direction.

“I played a lot of soccer and basketball competitively, and with soccer, I could’ve had a chance to go on,” Simon recalls. “But when I was a freshman in high school — maybe even before that — I got my first job in the kitchen. I really picked it up and enjoyed it, and the more I kept going, the more I realized I had a passion for it.”

Simon, who co-owns Charred Crust (105 South Meramec Avenue, Clayton; 314-721-0393) with his business partner James Flemming, didn’t realize it when he applied for that first kitchen job, but he’d actually been showing interest in cooking since he was a little kid.

Not long after he was hired for that initial gig, his mom told him a story about how when he was younger and was asked what he wanted to do when he grew up, his response was always the same: play soccer or cook for people. She even had some old photographs of Simon when he was just three years old, rolling out dough in the kitchen with the family’s matriarchs.

Still, it wasn’t until he got his feet wet in a professional kitchen that he realized cooking was something he would want to pursue as a career. His first taste of the business came while working at a pizzeria owned by Tony Bono’s restaurant family and, based on his experiences there, he felt his interest shifting from sports to cooking. By the time he was nearing the end of high school, he’d made up his mind to focus exclusively on a career in the kitchen.

Simon got the basics of kitchen work down at the pizzeria, but he knew he needed to expand his skills if he wanted to move forward in his career. His mom told him about a job opening at a new restaurant, Pepperotini’s, so he decided he’d apply. Little did he know, he was completely out of his league.

“I went in there, and there were all of these older guys applying for jobs wearing sports coats and taking this test,” Simon recalls. “I made such a fool out of myself. I was so bad, I even spelled ‘sous’ wrong — I spelled it ‘sooey’ or something. The manager called me the next day to tell me I totally bombed the test. I got a zero out of a hundred, but he was so impressed that I had the balls to come in and take it that he let me come in and wash dishes, then work the line on Thursdays, Fridays and Saturdays. It was tough, but I had to earn my way up.”

Simon admits that his time at Pepperotini’s was grueling, but it was also invaluable and an experience that would make him the chef he is today. His co-workers razzed him relentlessly, calling him “newbie” and playing tricks on him like dyeing his chef coats for Valentine’s Day service. However, they also mentored him, quizzing him on the names of all the components of kitchen equipment, teaching him knife skills and giving him a great education on how to cook on the line.

His experience at Pepperotini’s solidified his decision to get serious about his career. Simon enrolled in culinary school at L’Ecole Culinaire and pursued his studies while working at the restaurant. When Pepperotini’s closed, he went on with his chef and some of his colleagues to Quintessential Dining and Nightlife in St. Charles before changing directions and heading into a more corporate environment with Aramark.

Aramark’s hours appealed to him, but he quickly realized that his true passion was in a restaurant kitchen. That, coupled with a desire for a change of scenery, led him to Colorado, where he worked in restaurants until he got a call from school that his student loans were coming due. He returned to St. Louis and picked up where he left off with school and was hired on at Table Three in Wildwood. At first it was just a daytime gig, but when one of the chefs there, Jodi Ferguson, saw Simon’s potential, he helped him rise through the ranks.

While at Scape, Simon met Flemming, and the two instantly connected over their similar work ethic and desire to open a restaurant of their own one day. The more they talked, the more they realized that they had the same vision for what that business would be, and eventually they decided to take the leap.

That restaurant, Charred Crust, opened last August as a quick-casual spot — much different in execution from the fine-dining style of establishments Simon had worked in for most of his career. However, he and Flemming still bring the same culinary philosophy they shared at Scape to the more low-key environment, making everything in-house, sourcing as much locally as possible and taking extra steps to make even the most simple dishes stand out.

Simon admits that owning his own business has been nerve-racking, but it has also been extraordinarily fulfilling. And when it's difficult, he can still draw upon his passion for sports, which he believes translates well to the restaurant business.

“When I talk with someone on the line or interview someone for a job, I always relate it to sports,” Simon explains. “Everyone plays a huge part in our success, so if someone is late or no-shows, it hurts the whole team. Every cylinder has to fire properly to make sure that the restaurant functions properly — just like sports, but with much sharper objects.”

Simon recently took a break from the kitchen to share his thoughts on the St. Louis food and beverage scene, his over-the-top sweet guilty pleasure and why sometimes it’s OK to watch your daughter’s Disney movies.

What is one thing people don’t know about you that you wish they did?
I don’t mind watching my daughter’s Disney movies.

What daily ritual is non-negotiable for you?
Telling my wife and daughter I love them before I leave for work! And coffee.

If you could have any superpower, what would it be?
With a snap of my fingers, the kitchen would be organized, detailed and polished.

What is the most positive thing in food, wine or cocktails that you’ve noticed in St. Louis over the past year?
The St. Louis culinary field has gone from meat and potatoes to a more diverse palate.

Who is your St. Louis food crush?
Wudon Korean BBQ and Carl’s Drive-In.

Who’s the one person to watch right now in the St. Louis dining scene?
I don’t have one, but when I see these St. Louis chefs build plates with passion, it makes for an enjoyable experience.

Which ingredient is most representative of your personality?
Allspice.

If you weren’t working in the restaurant business, what would you be doing?
Trying to become a pilot.

Name an ingredient never allowed in your restaurant.
Chicken on steroids.

What would be your last meal on Earth?
Coffee-crusted Wagyu coulotte, or peanut butter and jelly with bacon on sourdough bread.