For Stephan Ledbetter, Re-Voaked Sandwiches is a Dream Come True 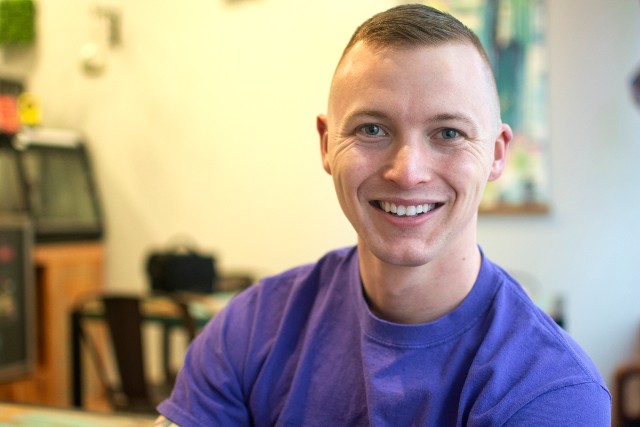 Stephan Ledbetter does not hesitate when asked about the spark that ignited his passion for cooking.

“It was my great-grandma,” Ledbetter says. “I spent a lot of time with her as a young kid, and she was always cooking for us. Thanksgivings were always our favorite holidays because she’d cook for ten hours, and then when everyone was sitting down to eat, she’d be sitting off to the side cleaning the carcass to make jus, using up every part. I’d watch her, and I just fell in love with it all.”

His love of food established at an early age, Ledbetter naturally gravitated to the food business when he needed a part-time job while in school. He got hired as a dishwasher at a Country Kitchen in his rural Illinois hometown, and he was instantly drawn to the line, at first more for the mystique that surrounded the cooks than for the actual cooking.

“I’d watch the cooks eat their food and hand me their plates — they were living the cook’s life in our town,” Ledbetter recalls. “I thought, ‘Oh man. I need to get out from behind this dish pit and start cooking.’”

It didn’t take long for Ledbetter to get that opportunity; quickly, he moved up to a cook’s position and worked at Country Kitchen until it closed about a year later. In need of another job, he found an opportunity with a new restaurant that was getting ready to open in his hometown, Robert Scott’s Grill & Cafe.

The owner, Robert Scott Tedesco, had been the executive chef at Kemoll’s for several years and was looking to bring that fine-dining touch to the town where he grew up. He hired Ledbetter as a cook, but their relationship deepened into one of mentor and mentee. It would change the course of Ledbetter’s life.

“I was only sixteen or seventeen, but he showed me how to do everything like orders and costing things out, Ledbetter explains. “We cut our own steaks and made everything in house. He kept asking me if I wanted to do this for a living or do something else, and I kept telling him something else. But I think he knew.”

That “something else” was a degree in psychology and sociology. After graduating from high school, Ledbetter entered college to pursue those specialties while he continued to work for Tedesco at the restaurant. However, it wasn’t long before he saw in himself what Tedesco had seen in him all along: He was meant to be a chef. He left college and promptly enrolled in culinary school, determined to follow what he realized was his true path.

While at L’Ecole Culinaire, Ledbetter was hired at the Scottish Arms and worked under a few different chefs, an experience he credits with expanding his cooking and kitchen management skills. He went on to help open Layla in the Grove, then worked at the Union Station Hotel, Central Table Food Hall and with the Gamlin Restaurant Group.

“I remember when I was younger, a chef told me, ‘Take some time and learn from every chef that you can,’” Ledbetter says. “That’s what I did. I learned as much as I could — everything from cooking techniques to business skills to planning menus. It was a great thing.”

While he was working for Gamlin Restaurant Group, Ledbetter was presented with the opportunity to help open the now-shuttered Oaked in Soulard, and he eagerly accepted. He brought on his colleague from the Scottish Arms, Carl Hazel, in the role as his co-chef, and together, the two executed a menu of thoughtful cuisine driven by their commitment to bring out the best in each other. It was a wonderful run, but it was much shorter-lived than anyone expected. The restaurant closed in just eight months, leaving Ledbetter both disappointed and unsure of his next step.

“When Oaked closed, I didn’t know what I was going to do,” Ledbetter says. “I’m usually really picky about what I do and take a decent amount of time figuring it out. Then one morning, I was walking through the Central West End, drinking some coffee, and saw a 'For Lease' sign on a building. I thought, “'This is perfect!”

Having worked in the Central West End on multiple occasions, Ledbetter was familiar with the neighborhood and also aware of what it was missing. He’d always thought that a well-executed sandwich shop could be a success in the bustling neighborhood around the area’s medical complex and felt that the Central West End needed more fast-casual options. Inspired by this idea and the prime location of the available space, he decided to take the leap.

Ledbetter opened Re-Voaked Sandwiches (12 North Euclid Avenue, 314-349-9017) this past December and is thrilled to have finally realized his dream of owning his own business. He recognizes that the shift from fine dining to sandwiches may seem like a major one, but he doesn’t treat it that way. In fact, he believes what makes his sandwiches special is that he approaches them with the same integrity as he would an elegant plated dinner — only one that happens to be between two slices of bread.

He admits that business ownership has been both wonderful and a huge learning experience, crediting his girlfriend Judith, best friend Joel and his family with helping him get his dream off the ground. But it’s not just the hours, business logistics and financial considerations of owning Re-Voaked that have been hard. His biggest challenge has been learning how to be a front-of-house person.

“I am a back-of-house person, and this entire place is front of the house,” Ledbetter explains. “Now I have to talk to everybody. It was really difficult for me and it pushed me out of many different comfort zones. I’m doing things I’ve never done, and I was scared, and it was hard. When you finally go out and do something for yourself, you realize how much you don’t know. It’s like a baby you have to take care of and make sure it’s everything you want it to be. But it’s been very good.”

Ledbetter recently took a break from Re-Voaked to share his thoughts on the St. Louis restaurant community, his secret candy stash and why no one’s meatloaf will ever be as good as Mom’s.

What is one thing people don’t know about you that you wish they did?
This is my first time being “front of house” anywhere. It’s truly a whole new learning experience, as I was accustomed to being back of house for my whole career.

What daily ritual is non-negotiable for you?
Before I leave the house, I always eat breakfast. This includes a smoothie, coffee, eggs and vitamins.

If you could have any superpower, what would it be?
Time travel. I always think about what life would be like living in different eras.

What is the most positive thing in food, wine or cocktails that you’ve noticed in St. Louis over the past year?
I love being in the Central West End. It really has a community feel, and all the businesses around here seem to truly cheer each other on and support one another.

What is something missing in the local food, wine or cocktail scene that you’d like to see?
More ghost kitchens and pop-ups.

Who is your St. Louis food crush?
Savage… But whose isn’t?

Who’s the one person to watch right now in the St. Louis dining scene?
Eugene Kolb.

Which ingredient is most representative of your personality?
Lemon. I can be a little bitter sometimes.

If you weren’t working in the restaurant business, what would you be doing?
I would be a delivery driver that made deliveries in an Astro van where the heat does not work and it has a fan plugged in as the A/C.

Name an ingredient never allowed in your restaurant.
They are pretty much all welcome. I cook with foods I don’t personally enjoy eating, like salmon.

What is your after-work hangout?
I enjoy decompressing at my house.

What’s your food or beverage guilty pleasure?
When I was growing up, any money I had was spent on candy. To this day, I have a cabinet I try not to go into full of Oreos and Sour Patch Kids.

What would be your last meal on Earth?
This is a no-brainer for me: my mom’s meatloaf. It reminds me of growing up and sitting around the dinner table. I was lucky; my mom cooked dinner every night. Her meatloaf will always be my favorite. She typically served it with mashed potatoes and whatever vegetable she had.