Clark & Bourbon Now Open at Live! by Loews Next to Busch Stadium

A month ahead of the St. Louis Cardinals' home opener, baseball fans have a few new destinations for dining and drinking near Busch Stadium.

On Wednesday, February 26, the Live! by Loews hotel opened in downtown St. Louis at 799 Clark Avenue. Located inside the luxury eight-story hotel (which features 216 rooms) are multiple dining concepts featuring floor-to-ceiling views of neighboring Busch Stadium and Ballpark Village. The project is part of the $260 million expansion of Ballpark Village and is a joint venture between the Cordish Companies and the St. Louis Cardinals.

In addition to the new, fancy hotel (which is one of only 29 in the country), Live! by Loews has debuted several new dining and drinking destinations: Clark & Bourbon, Bar Bourbon (complete with its own whiskey-aging room) and River Market. Another concept, the Bullock, located on the second floor, is slated to open closer to the Cardinals' home opener.

Executive chef Matt Lange will lead the kitchen at each of the spots. Before opening the concepts in St. Louis, Lange spent the past five years working at restaurants for the Live! by Loews hotel in downtown Chicago. Lange says that the entire kitchen crew has transplanted from Chicago to make Clark & Bourbon the best experience it can be for diners.

The menu at Clark & Bourbon is focused on high-quality steaks, burgers, seafood and pasta dishes. Lange says he's sourcing as many ingredients locally as possible and that there are dishes for diners of every diet and budget. 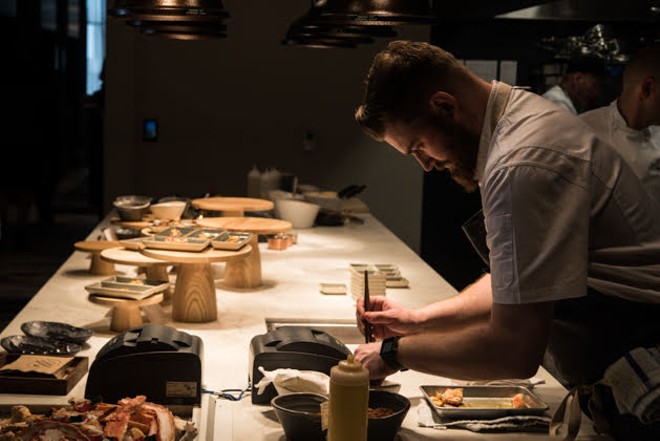 "There are unique plays on dishes, like the grilled Alaskan king crab comes spiced with togarashi and charred lemon," Lange says. "And then there's dishes for two, which I'm a big fan of, like the 30-ounce Tomahawk steak and a whole fried chicken. I think there's a price point and a dish for everyone."

"Vegetarians will find plenty to enjoy, too, including the Beyond Burger with vegan patties, American cheese, bread-and-butter pickles and house sauce, as well as the truffle tagliatelle,” Lange says.

"The truffle tagliatelle is one of my favorites, and it's more interactive dining because I'm looking to come tableside and shave some fresh black truffles over that dish," he adds.

If you're more focused on drinking than pairing cocktails or a glass of wine with dinner, hit up Bar Bourbon, located in the center of Clark & Bourbon. Here you can pull up a chair at a communal table near the gorgeous fireplace or grab a seat on the outdoor patio, which faces Busch Stadium, and order a drink. Bourbon features heavily on the cocktail list, of course, but the concept's name is also partially a nod to its on-site Whiskey Room.

The Whiskey Room features a large and impressive selection of around 500 bottles of whiskey, rye and bourbon, including rare and expensive pours from Pappy Van Winkle, Laphroaig and more.

Wrapped in a warm orange glow and set back from the main dining area, the Whiskey Room is a stark contrast to the otherwise bright and modern bar and restaurant. Although meant to serve as separate concepts, Clark & Bourbon, Bar Bourbon and the Whiskey Room are all located on the ground floor of the hotel, and the spaces seamlessly flow into one another to almost create the atmosphere of one connected space. 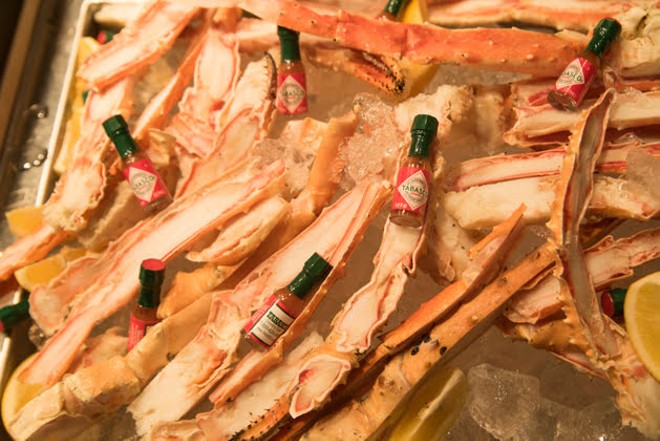 (Look closely in the dining room at Clark & Bourbon and you'll spot baseball memorabilia displayed in the entryway and subtle touches like light fixtures that reassemble baseballs, albeit black and white ones.)

"I couldn't be more excited; I think it's such a unique property as you flow through it," Lange says. "All of the countertops and fixtures — there was so much attention to detail when they were building out the open kitchen."

"[River Market] features Kaldi's coffee, fresh baked pastries every day, things that are all organic, biodegradable, bio-dynamic products; it's very unique," Lange says. "It's a transition away from eating like Pringles, Cheetos, Doritos ... . Everybody else has that, right? So it's our little niche that is meant as light fare while you're on the go or traveling."

The last dining concept planned to open at Live! by Loews is the Bullock. Located on the complex's second-floor terrace, the Bullock will offer an indoor and outdoor patio overlooking Busch Stadium and Ballpark Village. The concept will serve handcrafted cocktails and classic American cuisine, and offer fun "lawn games" on a stretch of bright green AstroTurf.

"It's shareable menu items meant to be light snacks, light bites with your friends and family before or after a baseball game," Lange says of the Bullock. "The patio overlooks Ballpark Village, and there's AstroTurf with awesome lawn games. It's a great place for friends and family to hang out before and after the game and there's an amazing cocktail program as well."

For Lange, opening these new dining concepts in the shadow of Busch Stadium has an extra special meaning and connection to his past.

"Obviously, we're right next to the baseball stadium, and I'm a big baseball fan myself — my dad played minor-league ball for the [Houston] Astros and [Minnesota] Twins, so I grew up going to baseball games," Lange says. "Everybody here is a huge Cardinals fan, and it's so awesome the draw that the team has; I'm looking forward to it." 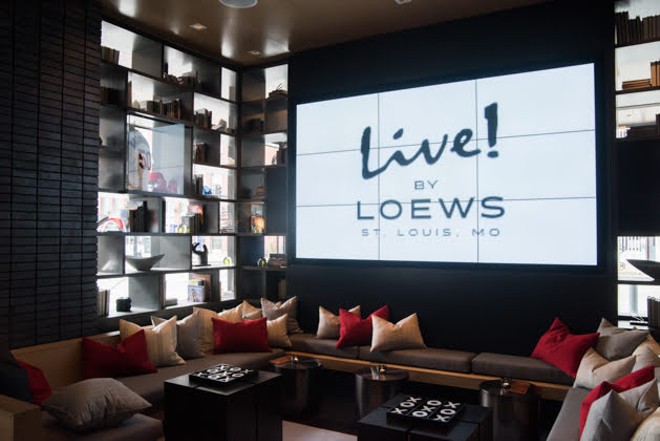 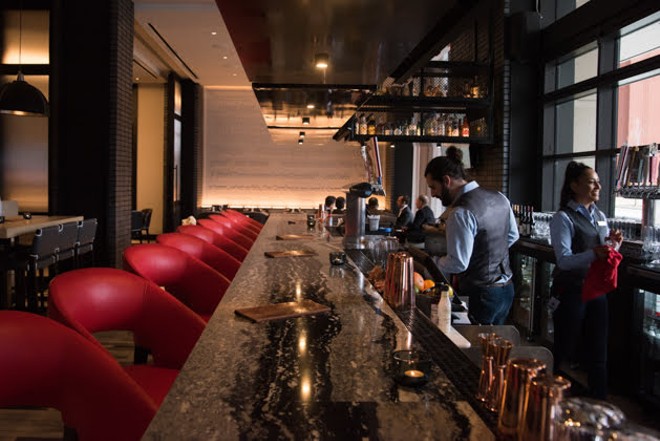 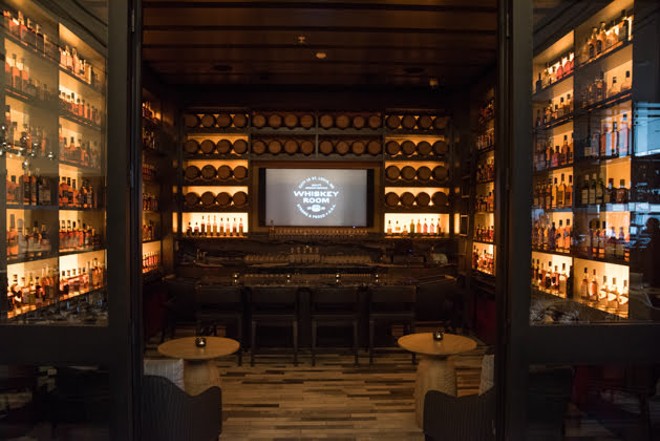 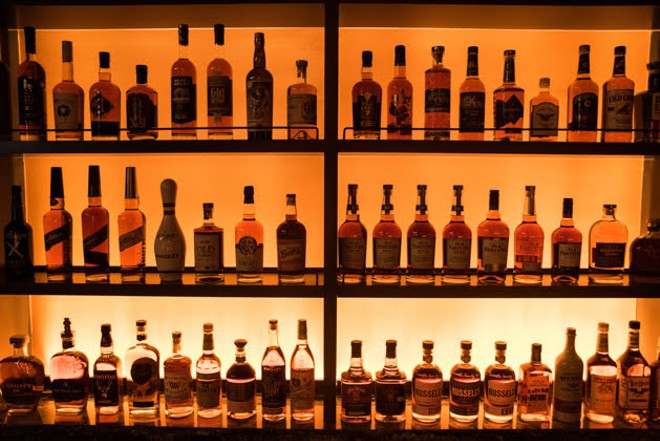