Sugarfire, Hi-Pointe Drive-In Team to Open Chicken Out in the Delmar Loop 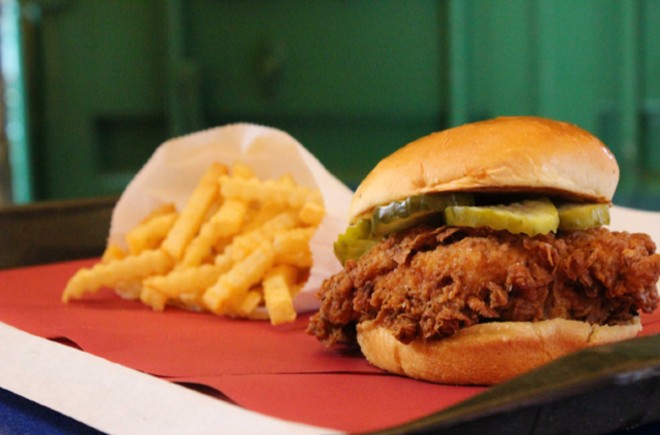 Get ready for a clucking good time, St. Louis. Chicken Out (6197 Delmar Boulevard), a new fast-casual concept, is slated to hatch in the Delmar Loop this spring.

Chicken Out comes from the team behind Sugarfire Smoke House and Hi-Pointe Drive-In. Co-owners Mike Johnson and Charlie Downs partnered with Ben Hillman, an investor at Lewis & Clark Capital in St. Louis, to open the new chicken-focused spot, according to a recent release.

“One of the reasons I'm so excited about this is Mike and Charlie are so authentic and genuine in what they do,” Hillman says. “It comes through in the creativity of their recipes and how they treat people — they build a culture where people love and feel pride in the work they’re doing.”

Hillman describes the menu as “classic but elevated.” The restaurant’s signature will be made-to-order chicken sandwiches made with fresh, high-quality ingredients. Menu items will include The Chicken Out, a fried chicken sandwich served with crispy pickles on a potato bun, as well as the ChicRib, a fried chicken breast topped with red onions, pickles and tossed in Sugarfire’s signature sweet barbecue sauce.

For diners not looking for chicken, the menu will offer The Faux Hawk, a plant-based version of the classic house sandwich.

As at Sugarfire and Hi-Pointe Drive- In, sides at Chicken Out will not be afterthoughts. The restaurant will serve kale slaw, mac ‘n’ cheese and crinkle-cut fries seasoned with Chicken Salt, a popular seasoning from Australia made from chicken bouillon.

Johnson has had the idea for the restaurant for more than ten years, ever since he saw the former Church’s Chicken in the Delmar Loop. When Piccione Pastry closed in September 2019, Hillman says Washington University called him and asked if they could open a concept there.

This is the first time Hillman has opened a restaurant himself. He previously helped lead MOD Pizza and Smashburger franchises in Colorado before moving to St. Louis in 2016. He met Johnson and Downs years ago through Jay Indovino, an investor in Chicken Out and former executive director of Pedal the Cause.

The restaurant will seat 32 patrons for lunch and dinner seven days a week. Chicken Out will preview some of its new eats on Saturday, February 29 from 11 a.m. to 10 p.m. and Sunday, March 1 from 11 a.m. to 9 p.m. at Hi-Pointe Drive-In’s location at 1033 McCausland Avenue in the Hi-Pointe neighborhood.