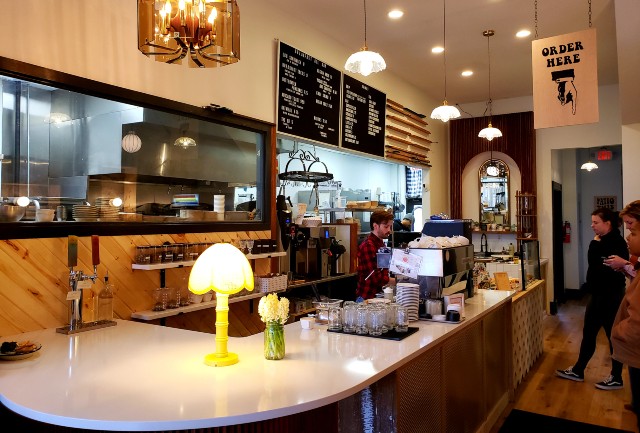 Jessie Mueller took a year to think about what Rise Coffee (4176 Manchester Avenue, 314-405-8171) really needed. She first opened the space in 2013, and while she believes it has grown as a bridge in the community, there was something missing.

After a recent remodel, it turns out that it wasn't a what that was missing but a who — specifically, Mueller's grandmother was missing.

From 2015 until early 2019, Mueller had stepped away from Rise to focus on growing her family, and former employee Aaron Johnson bought the business. Although free time while raising two small children is sparse, Mueller used what limited free time she had to research more about her grandmother.

As a child with divorced parents, Mueller spent every weekend at her grandmother’s house growing up. She recalls her grandmother providing her a safe haven (plus warm biscuits on Saturday mornings). So when she bought back her business last year, she wanted to create a safe space for others in her community, like her grandmother had given her so many years ago.

“This new design of Rise is sort of deeper than just wanting to make a cool space,” Mueller says. “I want it to feel like a grandma's hug.”

Retro wood paneling and antique lamps help set the new mood, as does beautiful mustard yellow banquette seating in a new booth. Mueller knew she wanted to include counter seating for customers much like you'd find at a diner. Three yellow-green swivel chairs now line the counter, allowing guests a close-up look at the baristas and espresso machine. Mueller likes to call it "diner chic."


An exposed-brick wall peeks out from across the counter while wicker chairs line the dining area. Natural light from the front windows complement the soft pinks and oranges in the updated color scheme. The vibe might send customers back to the 1970s or bring back childhood visits to Grandma’s house. 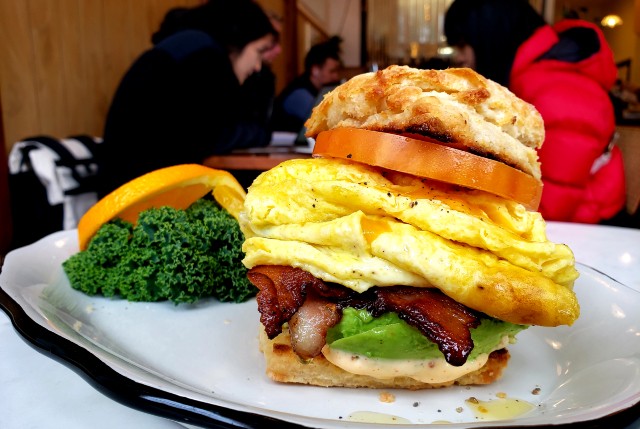 Rise has removed its lunch menu items and now features an exclusively breakfast-focused menu. The house breakfast sandwich is an absolute monster of a meal: Eggs, cheddar, tomato, bacon and avocado are all piled high between two light and fluffy biscuits. Did I mention the spicy mayo? Genius.

Be warned, though: This is either an extremely confident day-date dish or the kind of breakfast to order when you're unconcerned about clothing stains. By the time I finished eating this huge sandwich, I had smeared one ingredient or another all over my face without fail after each bite. That might just be a me thing, but the cleanup was 100 percent worth it.


At one point I switched to using a fork to better savor every last bite. I had been eating this sandwich off and on while writing for an hour and had just arrived at the halfway mark. With only 25 minutes left before Rise closed for the day, I was now racing against the clock.


Mueller created Rise as her next step as a community activist. She transitioned from a teacher to a social worker to the owner of a coffee shop, and so she yearns to create a space for open conversation at Rise.

“I think now we're in a place in society where a lot of people are polarized, and I really want Rise to be a space that is welcoming of conversation and all people, despite their beliefs,” Mueller says.

The space is designed to encourage more human interaction. Seats are strategically placed close together or at one long communal table. In just an hour, I watched two women next to me sit down separately only to now be planning to meet up in a different city.

One of the women had been painting a Mardi Gras-themed project. Her watercolors were now all dried out as she divulged her fears of moving to a big city and exchanged contact info with the woman next to her. 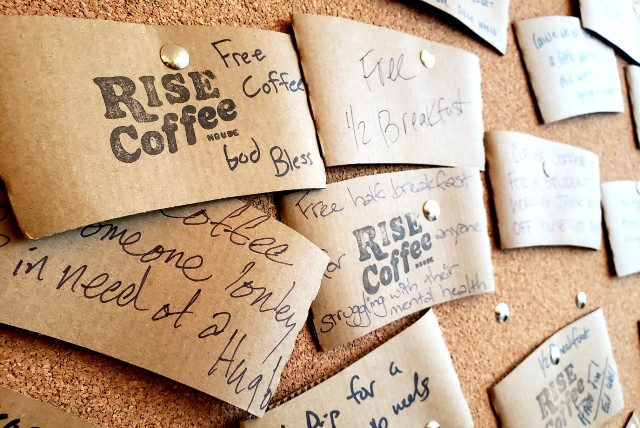 Rise’s concept is a hub not only for sustaining community, but also for building on that existing community and welcoming guests with open arms. Mueller created Rise’s program, Coffee for the People, in the coffeehouse's early days.

“It's like a warm embrace,” Mueller says. “You're welcome here; we want you here.”

The descriptions range from “For a queer person who’s new to St. Louis” to “For a student who needs a boost.” Mueller says that as the Grove goes through changes, not everyone can always afford a warm meal, so the program is Rise’s way of inviting community outreach within its walls. Mueller hopes Coffee for the People becomes Rise’s legacy in the Grove.

The upstairs of Rise features a children’s area which Mueller believes allows families to stay involved in community issues and discussions. As someone who brought her first born to work when she first opened Rise, Mueller understands the challenges of staying involved in the community as a parent.


“I want [customers] to feel safe,” Mueller says. “I want them to feel a sense of acceptance and excitement for what we're doing here.”

Mueller's passion for building community at Rise is equal to my passion for finishing this mighty breakfast sandwich. Thanks to my fork, it is now in pieces and looks more like a deconstructed art project than the original mouthwatering dish. There's thirteen minutes to go before Rise closes for the day, and I'm no longer sure if I’m still hungry or just too competitive to give up. Perhaps I'll have to allow myself more time on my next visit. 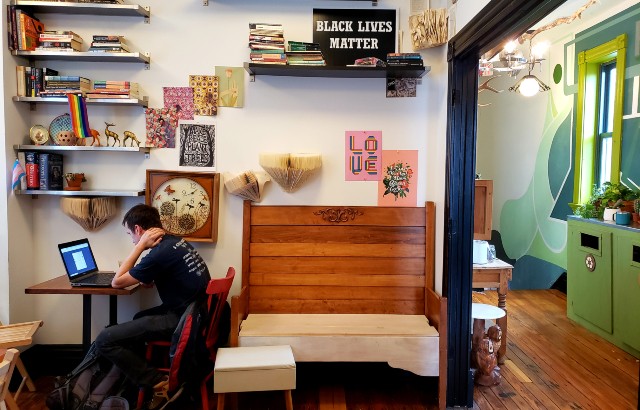 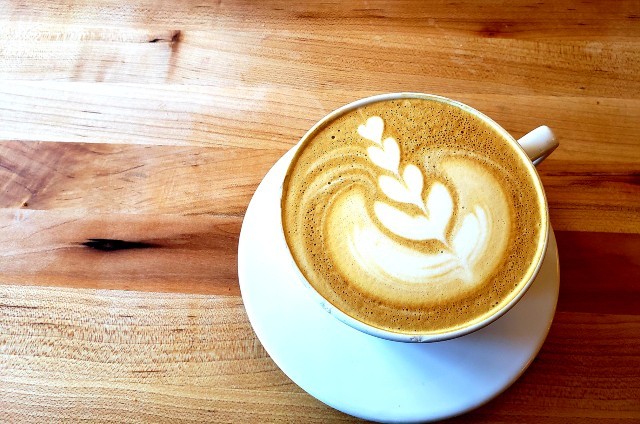 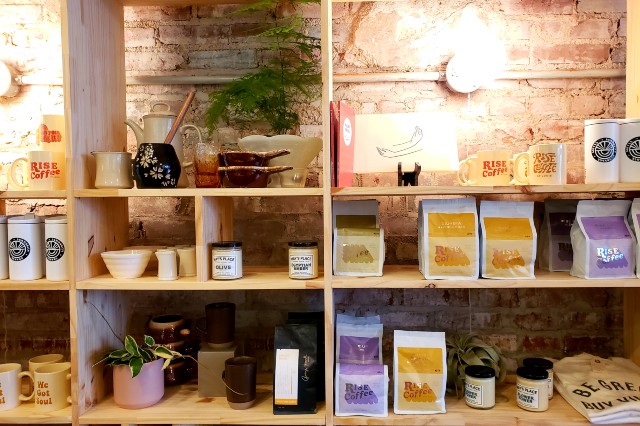 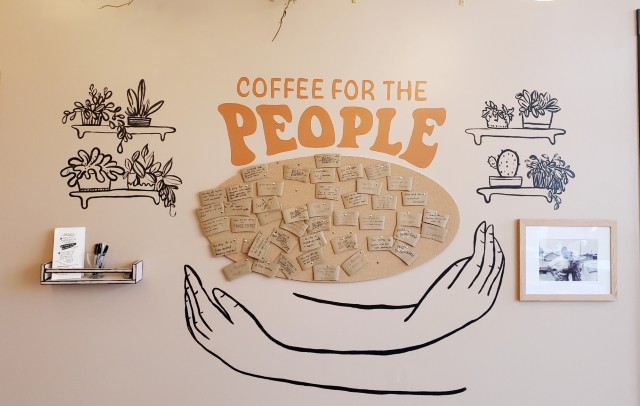 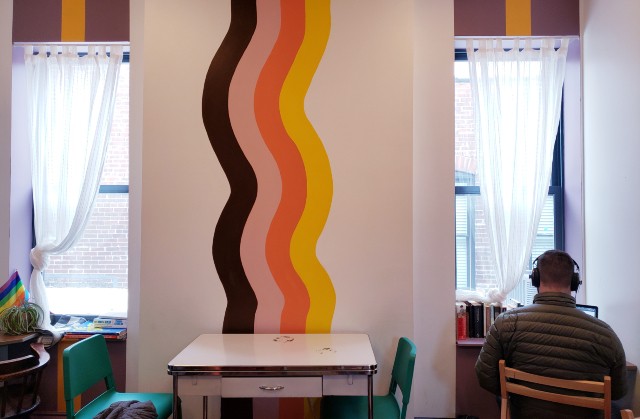