Chef Tommy Andrew has long been a talent in kitchens across St. Louis
— and now he's opened a fresh and exciting concept all his own. On Thursday, February 27, Andrew will open Nomad (1227 Tamm Avenue, 314-261-4902) inside Tamm Avenue Bar in Dogtown. The restaurant opens at 11 a.m. and will stay open until food sells out.

As the RFT reported last fall, Bob Brazell, co-owner of Tamm and chef-owner of Byrd & Barrel, approached Andrew with the opportunity to open a concept inside the bar after Mac's Local Eats exited last August. Opening a sandwich shop has been a long-time dream for Andrew, who first met Brazell when the two worked at the late, great Monarch.

"This is what I've wanted to do for a long time — a sandwich shop — and I've been collecting equipment over the past couple of years, and it felt good to finally put that stuff to use after years of collecting dust in the garage," Andrew says with a laugh.

He has previously worked at a string of top spots around town, including Randolfi's, LoRusso's Cucina and Cinder House, where he worked as senior sous chef until leaving to launch Nomad.

The opening menu at Nomad includes a meatball sub inspired by the pork and lamb meatballs Andrew developed for Randolfi's — and aptly named the RIP Randolfi's — with marinara sauce and provolone, as well as a killer housemade pastrami sandwich on marbled rye with Swiss cheese and special sauce.

Andrew is also excited to debut a curry chicken salad sandwich, a recipe he says he's "nailed down to a T," with a housemade curry sauce and a flavor that "sticks with you for several minutes; it's very powerful and delicious."

"The menu is nothing crazy — it's familiar food done the right way, and I think that's really important," Andrew says. "I've been doing test runs of the food, including the pastrami sandwich, and someone will say, 'Oh, I don't like pastrami,' or 'I've never tried pastrami,' and I'll ask them to just try it and they're like, 'Oh my god; pastrami is the best thing I've ever had.' It just has to be done right and you have to put the love into it."

Customers can still expect to find a burger inside Tamm, although with Andrew's unique spin. He is making a smashed burger, yet one larger and thicker than the traditional thin, frilly-edged patties often associated with the style.


"People love burgers, so I have to have a good burger," Andrew says. "I'm using grass-fed beef from Price Farms in Missouri, it's really good stuff, and Chris Bolyard at Bolyard's Meat & Provisions has done the beef processing for me. I'm not trying to reinvent the wheel, just serve a really tasty burger."

Sandwiches are the stars at Nomad, but Andrew has developed a selection of starters and sides to round out the menu. Starters range from fried arancini and smoked wings to kimchi fried Brussels sprouts and onion dip while sides include a house potato salad, chips, fries and a pickled beet salad.

Originally scheduled to debut last fall, Nomad's extensive kitchen and dining room renovations pushed back the opening date — but the transformation has proved well worth the wait. What was once a small kitchen setup has been expanded and outfitted with new floors, updated appliances and a more comfortable workflow for both the kitchen crew and guests.

Diners now enter Nomad through the front door of the former Mac's Local Buys and queue up in that space to help reduce crowding in the bar area.

"There are now basically two kitchens," Andrew says. "The kitchen where the orders [previously] came in is pretty much the same; I replaced some stuff like the dish machine, sink. The biggest changes came in with where Mac's [Local Buys] was; we basically gutted it and built an order counter where you order your food, and then behind that is a little prep kitchen. It was very important that we had a separate space to prep."

Eventually Andrew hopes to add a selection of grab-and-go eats at Nomad, but for now, he says he's just thrilled to finally to able to share the concept with diners. He says the restaurant was named after his career journey so far, one he describes as nomadic, but now he's found a spot where he can be settled.

"I came up with the name Nomad because I'm kind of coming in here solo, doing my own thing," Andrew says, "and as I thought about it, I'd been working over here for a couple years, then working over there and wandering for two to three years at good jobs, so it's kind of an oxymoron — a nomad has finally found his home." 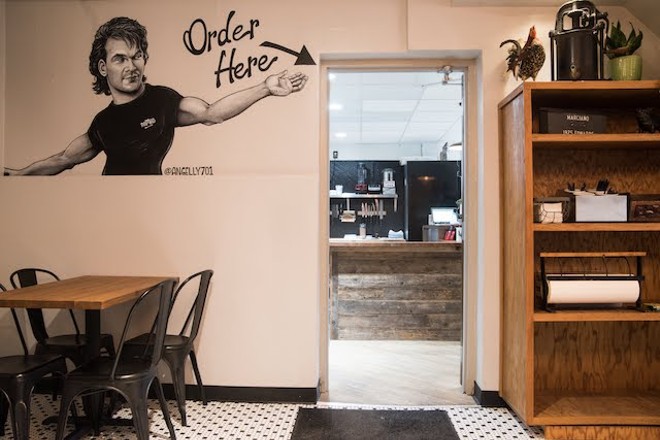 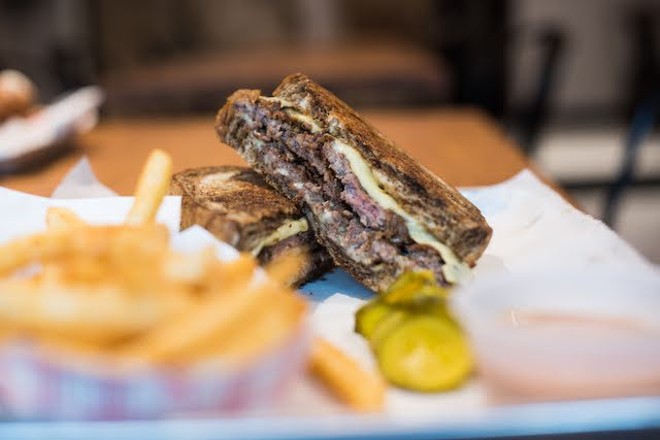