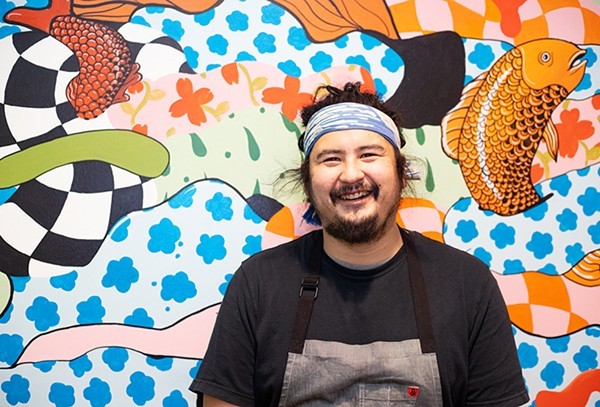 Semifinalists for the 2020 James Beard Awards were announced this morning — and eight St. Louis-area chefs and restaurants made the prestigious list.

Often considered the Academy Awards for the restaurant industry, the James Beard Foundation has been recognizing excellence and innovation in the food and beverage industry for three decades.

The first chef in St. Louis to win a Best Chef: Midwest award was Gerard Craft in 2015, although he and so many other lauded local chefs have been nominated for the coveted honor in the past.

This year, James Beard Awards semifinalists in the St. Louis area include:

In the past few years, Riverfront Times restaurant critic Cheryl Baehr has lauded these chefs and restaurants as some of the very best in town.

In her original review of iNDO, Baehr described Nick Bognar as an emerging talent; the year prior, the chef had been named Rising Star Chef of the Year for his work at his family's restaurant, Nippon Tei.

"That Bognar can crack jokes about the Cheesecake Factory and Red Robin while serving a $300 meal flies in the face of everything we have been conditioned to think about fine-dining — and it's utterly refreshing," Baehr wrote. "I'd go so far as to say that Indo as a whole, even including the omakase, is not a fine-dining restaurant at all, while being one of the most luxurious meals I've ever experienced. It's a revolution that has changed our city's dining scene, fomented by a chef who we will be hearing from for years to come."

In her review of Olive + Oak, Baehr described the restaurant as on track to be the best restaurant of 2016, praising Mendica's work in particular: "She proves she can hit the mark on every other type of cuisine as well."

Baehr continues her praise of the overall restaurant, writing that, "It's not surprising that everyone wants to eat here — including the restaurant's own staff members, who choose to hang out at their place of employment on their days off. That speaks volumes not only of the caliber of food coming out of this kitchen, but also of the culture that [Mark] Hinkle and [Greg] Ortyl have created at this impeccable restaurant.”

When reviewing Balkan Treat Box in October 2017 — which was only operating the food truck at the time, though with a similar menu — Baehr was also impressed. "Balkan Treat Box is one of the most soulful, innovative concepts to open in recent years," Baehr wrote.

In July 2017, Baehr filed her review for Vicia, Michael and Tara Gallina's fantastic restaurant. She praised chef Gallina's talent and creativity and described his cooking as something that makes diners rethink food and love what you're eating.

"If their name — Latin for a cover crop that's planted to replenish the soil — underscores their thoughts about food, their choice to locate in the Cortex district represents their desire for a restaurant that is about more than simply satisfying appetites," she wrote. "The 'innovation community' is designed to be both a gathering spot and a testing ground for cutting-edge concepts. As Cortex's flagship restaurant, Vicia fits right in."

Baehr filed her review of chef Lona Luo's Lona's Lil Eats in 2014. At the time, Baehr praised the small Fox Park restaurant as one of the very best she'd visited in town in some time.

"Lona's Lil Eats lit up my palate with layers of flavors that kept revealing themselves even after I left the restaurant," she wrote. "She may call her cooking 'Lil Eats,' but it's the biggest taste I've had in years."

As for Nathaniel Reid of Nathaniel Reid Bakery, who was honored with a semifinalist nomination for Outstanding Baker, Baehr wrote in her review of the shop in 2016 that the chef's balance of creativity and science in baking was astounding.

"Reid does not believe in perfection. In fact, he thinks it doesn't exist," she wrote. "'It's like I'm chasing something I'll never catch, but I'm still working toward it,' he says. But while he may not want to deploy the 'p-word,' I've never seen a place where it would be more apt. Indeed, with pastries like these, I'd say he has his craft down to a science."

While many of the spots nominated for awards have opened in the past five to ten years, Mai Lee in Brentwood, which was shortlisted as Outstanding Restaurant, has been serving St. Louisans some of the best Vietnamese food for more than three decades. Founded by Lee Tran in 1985, Mai Lee has been lauded as the first Vietnamese restaurant in St. Louis. in January 1987, the late, great St. Louis Post-Dispatch restaurant critic Joe Pollack filed a glowing review of the restaurant; if you visit the Brentwood restaurant today, you can read that same review from behind a glass frame.

Today, Mai Lee continues its long tradition of serving piping-hot bowls of fragrant and warming pho alongside customer favorites such as the salt-and-pepper calamari and a St. Paul sandwich that Food Network recently named one of the best sandwiches in America. Lee's son, Qui, who grew up working alongside his parents in the family restaurant, has long been a familiar face at the restaurant. The beloved local entrepreneur has since opened a concept of his own, Nudo House, which has been met with similar rave reviews.

Congrats to all of the local chefs and restaurants who have been shortlisted for the Beard awards this year — you make the St. Louis area a delicious and exciting place to call home, and we couldn't be more proud to see you all receive these very well-deserved national honors.