Cinder Bar to Open at the Four Seasons Hotel St. Louis on March 5

Cinder Bar will open adjacent to Cinder House on Thursday, March 5, on the eighth floor of the Four Seasons Hotel St. Louis, according to a recent release.

The bar and restaurant will complement the South American-inspired wood-fired fare at its sister concept, which opened in August 2018, with a menu of shareable dishes developed by Craft and Cinder House chef de cuisine Josh Adams. The menu at Cinder Bar was primarily inspired by a trip Craft took to São Paulo, Brazil, last fall.

“In Brazil, these little botecos are everywhere, which is a low-key bar that serves cold beer and simple food," Craft said in the release. "You stop by after work and have a beer and a few bites. I was instantly hooked. There is even a competition to see who has the best bar food in the country. I wanted to bring this experience back to Cinder Bar. I worked closely with chef Josh to enhance some of the menu items and create a more authentic experience on the Cinder Bar menu.”

Shareable plates at Cinder Bar include piri piri chicken wings with coconut dressing and a chile glaze, stuffed dates with bacon, chorizo and aji panca sauce, empanadas made with a housemade corn dough and filled with braised pork shoulder, and pastels, a popular Brazilian street food, per the release. 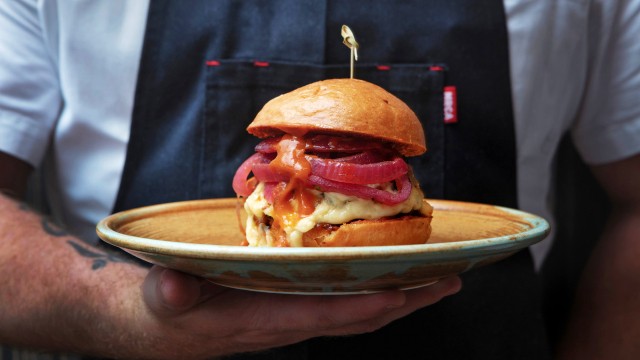 For the pastels, Craft pulled from the recipe used by his Brazilian childhood nanny, Dia, who inspired the original concept for Cinder House. The empanadas are filled with Chihuahua cheese, hearts of palm, mushrooms and shallots and served with a salsa verde.

The new spot will debut with a splash on Thursday with a special happy hour from 5 to 8 p.m. featuring live music by local artist Tonina Saputo from 6 to 7 p.m. Stop in to try cocktails from bar manager Jeffrey Ward, who has developed a drink list featuring South American-inspired tipples (including N/A cocktails). Opt for classic drinks such as a caipirinha, pisco sour, lemon batida or la branca.

“We want guests and locals to have the opportunity to have a tiered dining experience with us," Craft says. "Grab a drink and a casual bite at the bar with friends, enjoy an intimate date night at Cinder House restaurant seated by the window with panoramic views of the city or enjoy a truly special experience at Dia’s Room with a limited ten-seat tasting menu."


The new spot also features an updated interior, including a refreshed shelf of globally inspired cookbooks and travel books from Craft's collection, plus photos of his recent trip to Brazil.