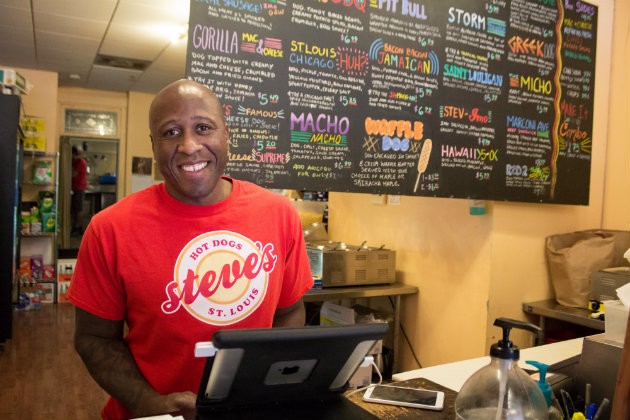 After less than a month, our favorite top dog is back in action.

"It was really hard to close in the first place, so getting it back open feels great," owner Steve Ewing says. "We're excited to reinvigorate the business and get it back out to people."

In late January, Ewing announced plans to close after business on February 1. In the announcement, he said that he and his team "tried to stay nimble by offering delivery and implementing a number of creative promotions, but in the end, we couldn’t find a way to make the business sustainable."

During the six days between his announcement and the closure, Ewing saw lines snaking out of the shop's door daily. During its final service, Ewing and his staff had to take a break between lunch and dinner shifts to grill up additional hot dogs to accommodate the large crowds.

With the help of longtime customer and angel investor Danni Eickenhorst, Ewing will reopen Steve's on February 26 for dinner service. When Ewing got that fateful call from Eickenhorst, he says he could only think of one word: "wow."

"They recognized it was a good business and it was good for our community," Ewing says. "They saw the impact on the community. The last days we closed were insane. After we went out with a bang, they felt like we needed to come back."

Ewing hopes to keep the momentum from the last few days going when the store reopens. At his first brick-and-mortar store in 2011, Ewing remembers the idea of opening with a lot of noise. He's carrying that idea with him into his new beginning.

"Hopefully, now, there will be more people who know about us," Ewing says. "I'm hoping we get a similar response and get to come in with a bang. We want to bring that energy back."

At the revived location, Ewing hopes to focus on engaging with his customers. One way he wants to do just that is through the beloved create-a-hot-dog contest. If it's good, it stays on the menu. Speaking of the menu, all of the original favorites will remain. Ewing also notes that catering options at Steve's will expand to include a nacho bar.

Moving forward, Ewing believes the biggest obstacles are behind the restaurant, and he's excited to open this next chapter.

"We have a fresh start," Ewing says. "The main hurdles are over. Now, we're just honing in on being the best hot-dog shop in St. Louis."

Steve's will be open Monday through Friday for dinner service and on Saturday and Sunday for lunch and dinner.