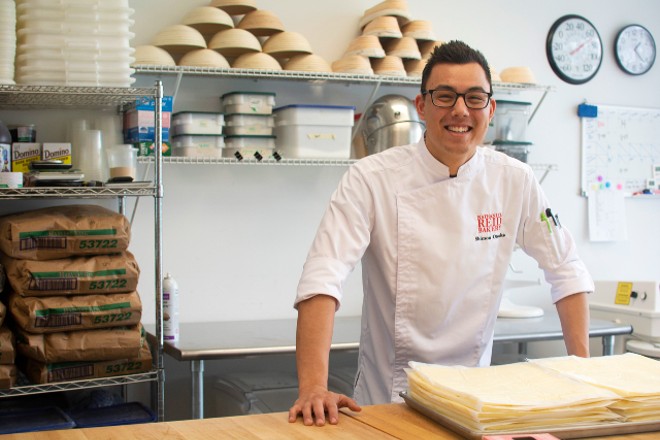 Shimon Otsuka has loved to cook ever since he was a little kid growing up in Japan. In fact, he admits that he was so singularly focused on food to the point that he knew he wanted to be a chef by the age of seven. He’d eat and cook anything, but there was one type of food he wholeheartedly disliked — sweets.

“I loved food and eating ever since I was little and have these pictures of me as a kid cutting vegetables and making stir-frys wearing an apron and a hat,” Otsuka says. “But I was never big on eating sweets. Actually, I didn’t like them to the point that I would stay away from them as much as possible.”

As the kitchen manager at Nathaniel Reid Bakery (11243 Manchester Road, Kirkwood; 314-858-1019), one of the top pastry shops in town if not the country, there is no way Otsuka can stay away from sweets. Day in and day out, he is chef-owner Nathaniel Reid’s right-hand-man, producing pastries that receive national acclaim and set the standard for what’s possible in the dessert world.

Thankfully for Otsuka — and those who enjoy his handiwork — his thoughts on sweets began to change after receiving a birthday present from his parents when he was in third grade. The gift was a cake-baking cookbook, and Otsuka found himself instantly intrigued by the science behind the processes described in it. He devoured its contents and made every single recipe in the book, fascinated by how little tweaks in temperature, time and ingredients could produce vastly different outcomes.

Otsuka also realized that the artistic side of pastry appealed to him. As a kid, he always gravitated toward art, especially sculpture, and found himself constantly seeking inspiration from cakes he’d see in display windows. He often scoured the city for the best fruits and other ingredients to make his creations more impressive.

As passionate as he was about cakes, Otsuka was equally interested in baking bread. Every day after school, he’d come home and start the bread-making process, let the dough proof overnight and then get up early in the morning so that his family had fresh-baked bread to start the day. Eventually he expanded his repertoire to include bagels and got so good at making them that he started his own small bagel business.

“At first I was giving them away to neighbors and friends, but then they told me I should sell them,” Otsuka recalls. “I’d use the money I made to buy more ingredients and cookbooks so I could keep teaching myself. I was a weird kid.”

Otsuka was priming himself for a career in the pastry world, and he got his big break in that field when he was just seventeen. A family friend knew of a pastry chef who was opening his own bakeshop and encouraged Otsuka to reach out and see if he could help. Little did Otsuka know the chef was a renowned confectioner and pastry professional who would give Otsuka his first real foray into the industry.

Otsuka’s time with the bakery was short-lived, however, because his father’s career moved the family to Boston. Otsuka did not let that dampen his dreams, however; after graduating from high school, Otsuka immediately set out to find a job in a high-end pastry shop. When he could not find the right fit, he decided to move back to Japan and work under his former chef. He honed his craft there, dreaming that one day he would open his own pastry shop in the U.S.

Otsuka worked in Japan for five years before accepting that if he wanted to pursue his dream, he would have to take the leap and move back to America. He landed in North Carolina but was searching the entire country for a bakeshop that matched his vision for what he wanted to do. His research centered around places like New York City, San Francisco, Boston and Chicago, but he couldn’t find what he was looking for. Eventually, he came across one of chef Reid’s cakes and was blown away.

“I saw his cake and thought, ‘Wow, this doesn’t look like what you normally see in the United States,’” Otsuka says. “I didn’t know what kind of place it was — it didn’t look like a shop. But it looked so nice I decided to reach out, tell him who I was and what I wanted to do and see if he was hiring.”

Reid wasn’t hiring at the time, but Otsuka didn’t let that deter him. Instead, he packed up his belongings and drove across the country to stage at the bakery, confident that it was the perfect fit for him. His leap of faith paid off; after seeing what a great fit he was for the bakery, Reid decided to hire him.

Otsuka’s experiences working at Nathaniel Reid Bakery have reshaped his vision for what he wants to do in the pastry world. At first he thought he would specialize in cakes, but the more he works with laminated pastries, sandwiches, quiche and bread, the more he realizes that he no longer wants to limit himself to one genre. Instead he wants to fuse together everything he has learned over his ten years in the business with his own point of view.

“I’d love to do a mix of everything I’ve learned — modern French and Japanese cakes, candies, jams, chocolates, a whole range,” Otsuka says. “I want to take the things that I like and put them together to formulate my own unique style. I believe people are more adventurous now and are more open to trying new things.”

Otsuka recently took a break from the bakery to share his thoughts on the St. Louis food and drink community, the one thing you’ll never see at his workstation and how, even when he’s off the clock, you’ll still find him in the kitchen.

What is one thing people don’t know about you that you?
I like cooking more than baking. I enjoy cooking things that I love to eat, especially things that take time to make. Sous vide is one of my favorite methods to use at home. Putting time and care into what I make is how I get the most satisfaction.

What is the most positive thing in food, wine or cocktails that you’ve noticed in St. Louis over the past year?
All the new chefs bringing new cuisines to the area; you can get almost any kind of food you want.

What is something missing in the local food, wine or cocktail scene that you’d like to see?
I think there are more of these now, but coming from Japan, I would like to see more authentic Asian restaurants.

Who is your St. Louis food crush?
Hands down Balkan Treat Box. Not only is the food outstanding, but Loryn and Edo [Nalic] are great people. I would say I go there every chance I get.

Who’s the one person to watch right now in the St. Louis dining scene?
Chef Chris Krzysik at Takashima Records, the Japanese whiskey bar in the Grove.

Which ingredient is most representative of your personality?
That’s a good question. I would have to pick the Japanese citrus, yuzu. It’s got a bright distinct flavor and is growing in popularity in the States.

If you weren’t working in the restaurant business, what would you be doing?
I’ve always had a fascination with art. It’s something that I’ve been drawn to, so I would probably be an architect or some other kind of artist.

Name an ingredient never allowed in your restaurant.
Margarine.

What is your after-work hangout?
You will see me cooking in the kitchen or working out in the gym.

What’s your food or beverage guilty pleasure?
Believe it or not, Doritos and Nutter Butter.

What would be your last meal on Earth?
Lobster and scallops, two of my favorite foods.