It was a horror I wouldn’t wish on my worst enemy. Last month, when I pulled up to my favorite pizza joint, Feraro’s Jersey Style Pizza, a sign hung in the window offering terrible news.

Perhaps on its own this wouldn't have been such upsetting information, but judging by the environs inside the pizzeria, the sign meant that Feraro's was closed for good.

It may as well have been a knife to my Jersey-style-pizza-loving gut.

During my early college years, Feraro's was a haven for me and my friends. The restaurant's inexpensive slices made me a Jersey-style pizza fan before I even knew what Jersey-style pizza meant. I'd go after school with friends, get a delectably greasy slice with pineapple on top (haters gonna hate) and eat it folded in half like a true wannabe New Yorker.

Fortunately for south-county 'za fans, a new pizza joint will soon take its place. The new joint, Fuego’s Pizza (11726 Baptist Church Road, Concord; 314-270-4100), plans to open in early March inside the hole in the wall where Feraro’s once operated between a Baskin-Robbins and convenience store off of Baptist Church Road.

“I get the pain and loss,” Galaske says, “but we’re hoping people will give us a shot too.”

Galaske and his business partner, Chris Barker, moved into the former  Feraro’s space on January 2. The pizza joint will serve St. Louis-style pizza made with a mozzarella cheese blend instead of Provel.

Fuego's will also serve sandwiches with house-baked bread and preservative-free meat. The pizzeria's menu will be rounded out with nontraditional dishes such as nachos and homemade beignets.

"There's a Southwestern hint to some of what we're doing, but it's not really a fusion," Galaske says.

Fuego's will offer specialty pizzas as well, such as a street-taco pizza topped with al pastor and poblano peppers. The shop will also offer signature sauces such as the Fuego made with Carolina Reaper peppers and an Asian barbecue-inspired sauce called Sweet Samma Jamma. 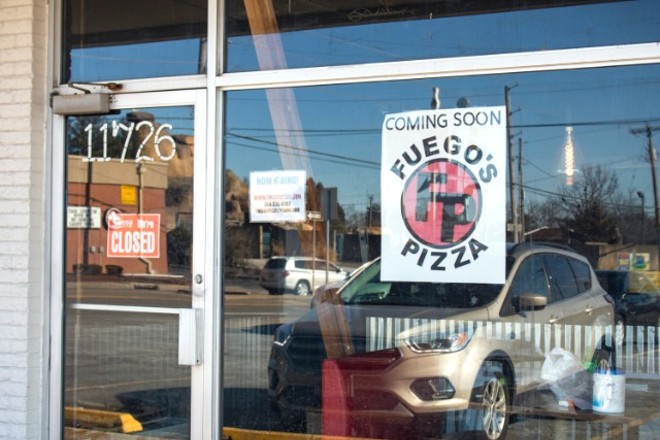 The partners have both previously worked in the restaurant business — Galaske opened restaurants through NPC International, a Kansas-based franchisee of Pizza Hut and Wendy’s, while Barker worked at Imo's Pizza — but Fuego's is the first spot they've opened themselves.

They've both had their eyes on the Feraro's South County location for years, Galaske says. The space has housed pizzerias for more than 60 years, including the tenant before Feraro's, That'sa Nice'a Pizza, which now operates an outpost in Arnold. When Galaske and Barker learned that the strip-mall space was available, they jumped at the chance to take over the lease.

The Feraro’s on Baptist Church Road was the local chain's last operating location. Two pizzerias — one in Soulard and another in the Patch neighborhood — closed in 2013 and 2017, respectively.

Jon Feraro started the Jersey-themed pizza chain with his mother, Nancy, in 2005.

“Fifteen years is a good run,” Feraro says. “I wouldn’t trade the years I was with Feraro’s for anything in the world.”

He tells the Riverfront Times that he hasn't owned the local pizza chain since 2016 when he sold it to the brand's current owner, Ben Abel.

After Feraro's Patch location closed in 2017, Abel told the RFT that he planned on focusing on the south-county store and wanted to expand Feraro's with additional locations west of Sappington.

Feraro declined to comment about the future of Feraro's, referring the RFT to speak with Abel, who is currently abroad and couldn't immediately be reached for comment.

In the meantime, I’ll be searching for my next fix of New Jersey-style pizza in the St. Louis area and eager to try Fuego's take on St. Louis-style 'za next month.