Hwy 61 Roadhouse's Bill Kunz on Longevity in the Restaurant Industry 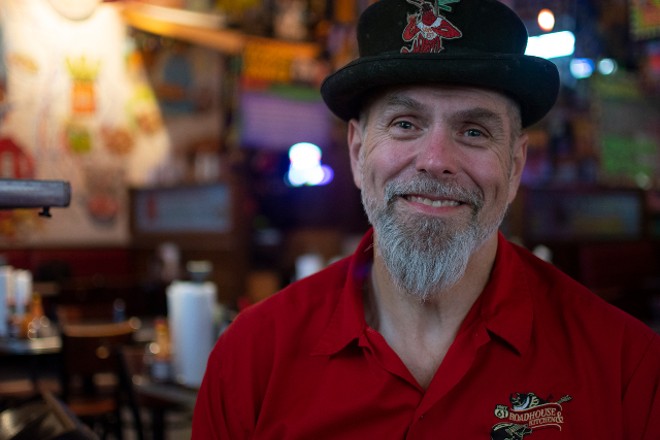 Looking back, Bill Kunz knew at an early age he was destined for the food business.

His grandfather was a chef; so was his uncle. Holidays at his great-grandmother’s house were massive culinary expositions — and completely non-negotiable. On weekends, he’d go with his grandfather to Soulard Farmers’ Market, and every year, right before Thanksgiving, the two would go together to Mama Toscano’s Ravioli to make ravioli.

Even his first job, washing dishes and scrubbing floors at a bakery on the Hill, seemed to seal his fate. However, when it came time to make a career decision, Kunz had other plans.

“I graduated from high school and went to the University of Nevada, Las Vegas, knowing I wasn’t going to be in the restaurant business,” Kunz says. “I wanted to be a professional football player and even played in college, but that didn’t work out. I saw that the University of Nevada, Las Vegas had a hotel and restaurant school and figured, ‘Well hell. I might as well become that.’”

Now chef-owner of Hwy 61 Roadhouse and Kitchen (34 South Old Orchard Road, Webster Groves; 314-968-0061), it’s hard to imagine Kuntz choosing another path. His career has spanned roughly three decades and all different types of environments, and he has thrived every step of the way.

His career began right out of college, when he was convinced to return to St. Louis thanks to an offer from the restaurant group that owns Houlihan’s. He started out at the West County location and eventually moved to the St. Louis Union Station property. At the time, it was one of the chain’s busiest locations in the country, and when he was asked to go from front-of-house management into the kitchen, he received quite an education.

“I spent eight months there,” Kunz recalls. “We were a scratch kitchen, and I still have nightmares of working for one of the guys out there. However, I learned a ton from him.”

After roughly five years working for Houlihan’s, Kunz was recruited by the Hyatt hotel operating at Union Station at the time. Hyatt was looking to get into the free-standing restaurant business, and they wanted him to run their restaurant, the Powerhouse. He did that for about a year and then left for Club Riverport and eventually Hooters. Though he stayed with the wing company for five years, he admits that it was not the sort of job he wanted.

“It sucked,” Kunz admits. “I helped them open Westport, then I became GM of [the] Union Station [location] and then area supervisor. I didn’t like it, and I realize it’s because I didn’t like being taken out of the day-to-day running of a restaurant. That’s what I loved.”

Kunz left Hooters for an opportunity with a gaming development that took him to Dubuque, Iowa. There, he was tasked with redeveloping the food and beverage operations for a riverboat casino — an industry that was in its beginnings. The gig took him back to the St. Louis area, where the development group was opening Growler’s Pub, then to Miami for another gaming boat and finally back to Growler’s.

He enjoyed his time working for the organization, but when a friend approached him with an offer to get into the business in his own right, he realized it was the direction he wanted his career to take.

Their first restaurant, Frank and Patty’s, was a humble hamburger and hot-dog spot in Kirkwood. Though they believed in what they were doing, they had larger plans in mind — namely a large restaurant in Lafayette Square they would name Lafayette Town Hall. However, their plans were dashed when Kunz received a phone call that is every business owner’s worst nightmare.

“We were going to open on a Wednesday in September, and a Friday right before, I got a phone call from one of our construction workers,” Kunz recalls. “He told me, ‘Turn on your TV — the building is on fire.’ There was a huge fire in a warehouse nearby, and two of the fiery canisters blew out of the warehouse, landed on our building and burned it to the ground. I thought, ‘So much for that.’”

Kunz had no choice but to keep moving forward, so he and his partner purchased the building in Webster Groves that would become Hwy 61 Roadhouse and Kitchen. Immediately, Kunz knew that he wanted the restaurant to have a Cajun inflection, not simply because he’d always been intrigued by the style of cooking but because it was a way to connect St. Louis to its sister city down the Mississippi River, New Orleans.

He and his partner settled on the name Hwy 61 as a reference to the “Blues Highway” that connects the cities along the Big Muddy, then they traveled down it, picking up memorabilia for the restaurant and ideas for the menu along the way.

The restaurant received instant recognition, including a spot on the Food Network’s Diners, Drive-Ins and Dives. However, before the show aired, Kunz’s business was almost derailed by something even worse than a fire.

“I had a heart attack on October 4, 2012,” Kunz says. “I was in the recovery room for another surgery when it happened. At the end of it all, I realized that I had to make some changes — that if I was going to stick around I couldn’t weigh 460 pounds. I made the decision to have gastric-bypass surgery and have been doing what I do ever since.”

Now the solo owner of Hwy 61 and a longtime veteran of the restaurant business, Kunz is reflective when he thinks about where he’s been and where he sees the industry going. He admits it’s a tough business; in his time working around town, he’s seen many great restaurants come and go. However, he feels that having that valuable perspective is what has helped him see a path to success in an increasingly competitive field.

“With so many new restaurants opening, we have to do something to distinguish ourselves,” Kunz says. “I hate the word staycation, but maybe we can call us a dining-cation. We’re definitely trying to provide people with an experience.”

Kunz recently took a break from the kitchen to share his thoughts on the St. Louis restaurant scene, his passion for cycling and the two upcoming concepts that are able to pique the interest of a man who’s seen it all.

What is one thing people don’t know about you that you wish they did?
That I'm not as outgoing when I'm not at work.

What daily ritual is non-negotiable for you?
I have to ride my bike.

If you could have any superpower, what would it be?
The ability to read minds, discover the best possible employees and [learn] what makes them tick.

What is the most positive thing in food, wine or cocktails that you’ve noticed in St. Louis over the past year?
I think the new food truck park in Affton will be very interesting.

What is something missing in the local food, wine or cocktail scene that you’d like to see?
I'd like to see food critics give some love to the restaurants that have been around a while and not always focus on what’s new.

Who’s the one person to watch right now in the St. Louis dining scene?
With Schlafly [Beer] purchasing Trailhead [Brewing Co.], it will be interesting to see if they are going to grow their brewpub business.

Which ingredient is most representative of your personality?
Salt and pepper. Low key but very important as a finishing flavor enhancer.

If you weren’t working in the restaurant business, what would you be doing?
I’d either learn to repair bikes, do computer graphics or teach at a culinary school.

Name an ingredient never allowed in your restaurant.
Swai [fish].

What is your after-work hangout?
After work, the bed. I hangout more before work, and that's on Grant’s Trail.

What would be your last meal on Earth?
A protein shake after my final bike ride as therapy for my soul, then pizza from Ale Emporium in Indianapolis or Andolini's [Pizzeria] in Tulsa.