Spend Valentine's Day With Your First True Love, Food, at this Pop-Up Dinner 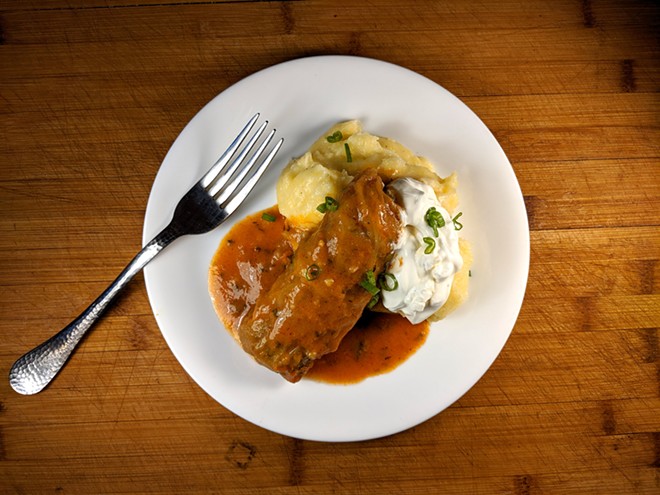 Goddard says he’s not trying to put his own creative spin on the cooking with the series, but instead serve authentic fare made with care and quality ingredients.

The meal will highlight the characteristically sour flavors of Romanian cuisine with wines such as those made with the indigenous Fetească Neagră grape, which imparts notes of red fruit and berry.

Goddard describes the menu as “straight from the Carpathian Mountains.” He looked to the Transylvanian region of Romania for inspiration in developing dishes for the dinner. “It’s a fascinating cultural region influenced by Slavic, Latin, Hungarian, German and Turkish culture, and the food definitely reflects that,” Goddard said in the release.


The meal begins with Ciorbă de Cartofi (sour potato soup) paired with Paparuda rosé wine. The main course this Friday will be sarmale, which was brought to Romania from what was then the Ottoman Empire. Sarmale plates sour pickled cabbage stuffed with minced pork and rice served with yellow maize porridge and sour cream. The evening will end on a sweet note with vargabéles, a Transylvanian sweet cheese and noodle cake.

This is the second dinner in Goddard’s LUKA dinner series. He hosted a Polish-themed dinner last month. LUKA first launched in Portland, Oregon, in 2009 as a way to showcase Croatian cuisine. The revived iteration in St. Louis will feature a broader look at Eastern European cooking, according to Goddard.

“A lot of people here don’t know what they’re missing,” Goddard said. “Based on what I know of the local palate, this is food St. Louisans should love.”

The dinner starts at 7 p.m. and seating is limited. Tickets are $65 per person and are available to purchase at lukadining.com. A cash bar will be available for beer, liquor, soft drinks and other wines. A portion of ticket sales will benefit the Society of St. Vincent de Paul Archdiocesan Council of St. Louis.