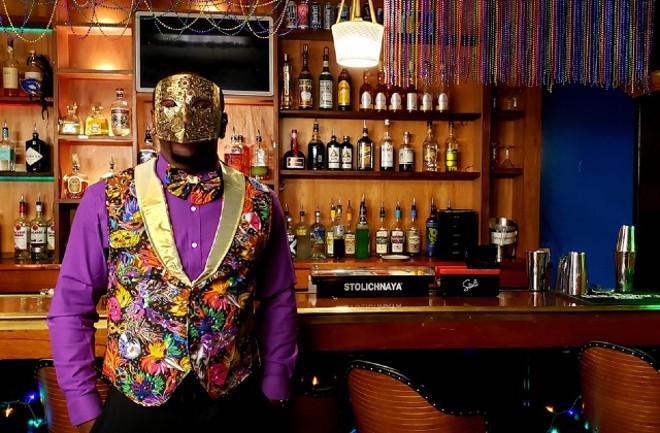 In the hours before its grand opening on Thursday, January 30, Carnival (808 Geyer Avenue) transformed from a neighborhood bar into a section of New Orleans that somehow got dropped in Missouri.

Operated by Molly's in Soulard (816 Geyer Avenue, 314-241-6200) owner Luke Reynolds, Carnival is a Mardi Gras-themed celebration of New Orleans in both decorations and food and drink. The theme is apparent in the handmade beaded chandeliers, bottles and curtains currently outfitting the space, which also hosted a holiday pop-up bar in December. Emma Donohue,
restaurant and events manager at Molly's, jokes that she has scars from hours of using a glue gun to craft decor for the pop-up.

A big fan and frequent visitor of New Orleans, Reynolds wanted to stretch out Mardi Gras festivities this year into the three-week-long celebration known as Carnival around the world. Of course, he already has a captive audience come Mardi Gras weekend, when Soulard is the spot for the Bud Light Grand Parade and other festivities.

“I’ve owned Molly’s for sixteen years, and I’ve probably been to New Orleans at least once a year for the past ten years — and probably 25 times overall,” Reynolds says.

The menu at Carnival features St. Louis twists on New Orleans classics. Donohue shared with the Riverfront Times how to make a few of the bar's eight signature cocktails. The Jester, for example, is one of the signatures and features local ingredients.

“We wanted to represent Soulard in that one, so we used locally sourced flowers from [Riley’s Flowers] and 1220 Artisan Spirits' Origin gin just to kind of have a local cocktail that was not only us, but the whole neighborhood,” Donohue says.

She thinks The Rex Shareable Goblet will be the drink of choice at Carnival in the next few weeks. The cocktail mixes together Captain Morgan, melon liqueur, Malibu rum, Blue Curaçao, sour mix, pineapple juice and Sprite. It's garnished with rock candy and purple lollipops and is recommended for two people to share, but Donohue said divvying it up among three or four patrons might not be a bad idea.

Instead of including King Cake on its food menu, Carnival features the flavors of the dessert in a martini: Purple sugar coats the rim, and a paper crown rests around the stem of the glass.

“King cakes are delicious in the flavor realm but not so much in the texture realm, so we decided instead of doing one as a dessert we’re going to do it as a dessert cocktail. And it turned out absolutely fabulous," Donohue says. 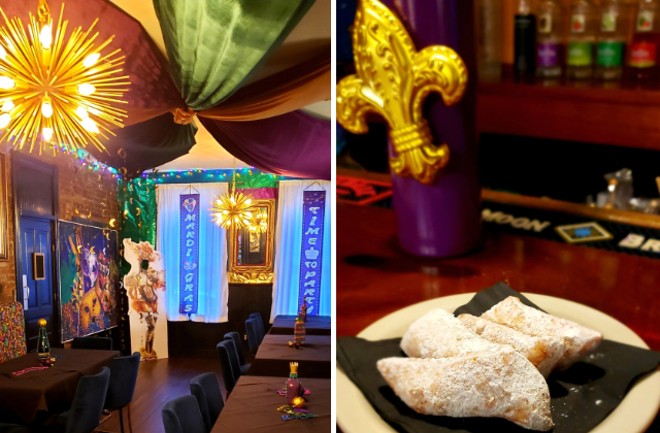 If you're wanting something a bit more savory, the Oyster Shooter should be your go-to. Made with Bloody Mary mix and Absolut vodka, the drink comes with an oyster on the side to, you guessed it, shoot with the cocktail.

If you are asking yourself, “What is New Orleans drinking without New Orleans food?” Reynolds is way ahead of you. Carnival's Creole-inspired menu includes the classics everyone loves, such as warm and fluffy beignets coated in powdered sugar, and other things you never knew you had to try, including alligator cheesecake.

Yep. That is not just some cutesy name. This savory cheesecake includes real alligator meat sourced from an alligator farm in Louisiana. If that's too adventurous for your palate, try the fried deviled eggs or Cajun chicken and andouille wontons. And of course, Reynolds says, the menu would not be complete without the chicken-andouille gumbo. Reynolds is looking to expand into crab and crawfish gumbo soon as well. “Gumbo is the holy grail of dishes in New Orleans,” he says.

Crawfish are almost in season, and Reynolds hopes he can get enough in soon to start hosting crawfish boils every Saturday at Molly's.

Carnival is open various days over the next four weeks, including Fat Tuesday. The pop-up bar is still taking reservations, though Reynolds said the Friday and Saturday slots are filling up quickly. He adds that Molly's will soon be  announcing the addition of Carnival Sunday brunch in addition to Molly’s regular brunch menu; stay tuned for those updates soon. 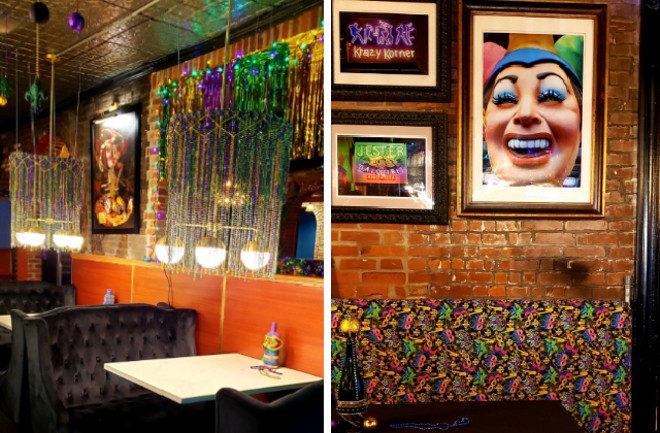 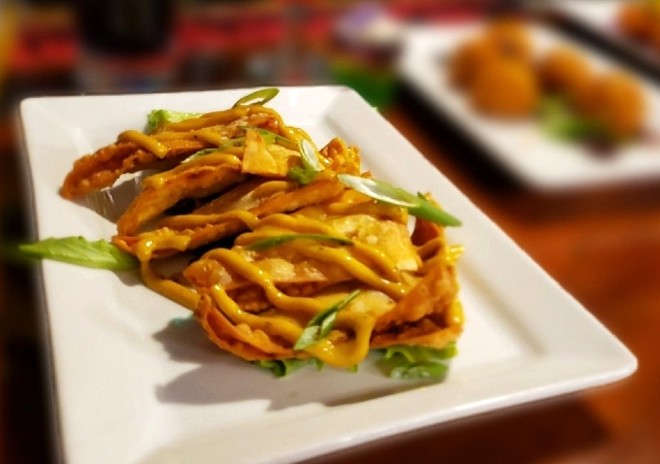 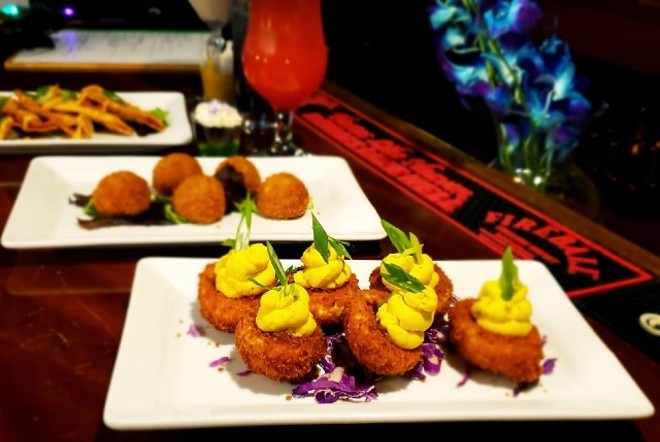