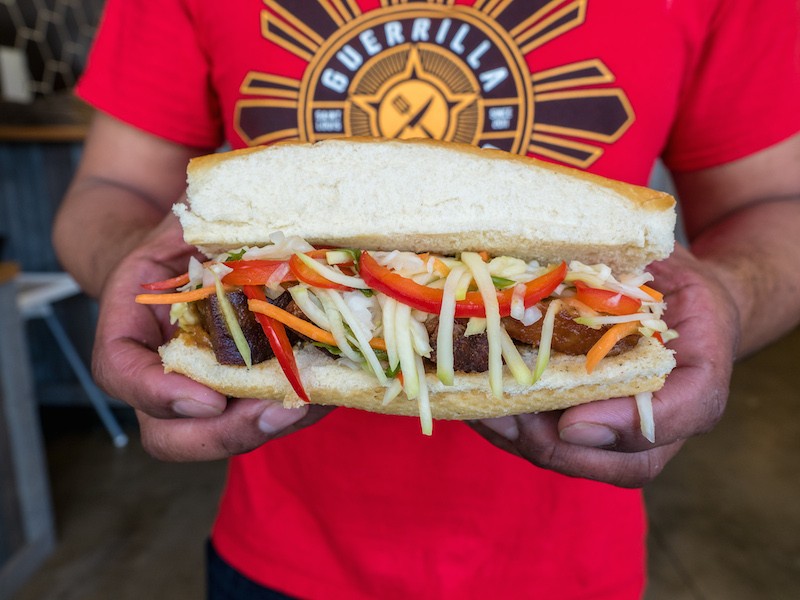 One of our favorite local fast-casual chains has shared some very sad news this morning.


Guerrilla Street Food co-owners Joel Crespo and Brian Hardesty announced in a press release today that they will be closing their Tower Grove East location at 3559 Arsenal Street as well as the location as well as the shop at 11658 Dorsett Road in Maryland Heights. Ian Froeb first broke the news this morning for the St. Louis Post-Dispatch ahead of the release.

The closures will occur in the next few days, per the release, with the Dorsett location shuttering first and the Arsenal spot closing on Sunday, February 9. Hardesty and Crespo are also seeking a chef or restaurateur to take over their lease for the space in the Delmar Loop at 6120 Delmar Boulevard. Operations will continue at that location for the foreseeable future.

The Webster Groves store at 43 South Old Orchard Avenue and the window inside 2nd Shift Brewing (1601 Sublette Avenue, 314-669-9013) will remain open for regular business, as will the food truck.

"We will continue to operate Delmar for as long as we can," Hardesty and Crespo said in the release. "Our hope is that we are able to salvage enough of our operations to continue service beyond February at our counter inside of 2nd Shift Brewing, as well as our newly opened Webster Groves location, and if we are lucky, our food truck will resume operations in the spring."


The business partners said that their decision to downsize their brick-and-mortar locations is due to "many contributing factors," but at the end of the day, "it has been our choices as owners that have led us down this path."

"We are here to take full responsibility for those choices," the release continues. "We will immediately reorganize, focus and hopefully, save Guerrilla Street Food. We hope that the upcoming effort is not too little, too late."

Guerrilla Street Food first hit the streets of St. Louis in 2011 as a food truck (and just ahead of the food-truck craze really taking off in town). A lot has changed in the past decade, but the concept's excellent Filipino-inspired fare has not. When former Riverfront Times restaurant critic Ian Froeb first reviewed the truck eight years ago, he described signature menu items such as the Flying Pig with the same praise we'd echo today.

"The 'Flying Pig' is Guerrilla's standout dish: tender slow-roasted pork on a bed of jasmine rice, the meat's natural flavor subtly spiced and then spiked with chiles, sriracha sauce and calamansi," Froeb wrote at the time. "And that slow-cooked egg on top, which has a texture like no other egg you've ever eaten: White and yolk are thick and supple, like custard. I'd happily eat one of these eggs on its own; deployed in tandem with the pork, it fully justifies the dish's name."

Just last month, RFT restaurant critic Cheryl Baehr described the impact that Guerrilla Street Food has had on the St. Louis dining scene over the past decade.

"It's hard to remember, but there was a time not all that long ago — 2011 to be precise — that the St. Louis food truck scene was virtually nonexistent," Baehr wrote. "If you have to point to one truck that set the mobile culinary scene on its course, Guerrilla Street Food would be it. What owners Joel Crespo and Brian Hardesty did for the St. Louis food truck scene was important, but their lasting legacy is their visionary approach to Filipino food. With a respect for tradition, Crespo and Hardesty have pushed the idea of what we think Filipino fare is and can be with a creativity that's just as sharp as their cooking skills. And what skills they have: One bite of the Flying Pig and you'll wonder why we all weren't clamoring for Filipino food in St. Louis sooner."

The release ends on a note of gratitude for the many customers who have patronized Guerrilla Street Food over the past nine years.

"Whatever happens with the future of our restaurants, it has been an honor and a pleasure to serve you," the release concludes. "Please accept our most heartfelt thanks for your support throughout these last nine years."