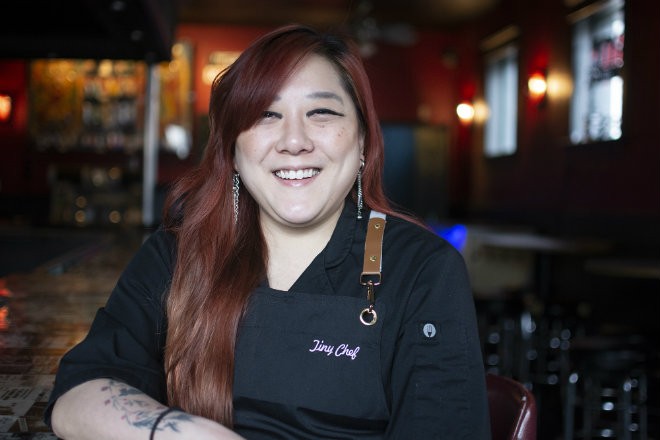 Melanie Meyer realized early on in her cooking career the power that food has to make people’s lives a little more joyful. Even in a humble hospital cafeteria, she couldn’t help but see herself as an ambassador of joy — and her customers took notice.

“One of my first jobs was working overnights in a hospital cafe,” Meyer recalls. “I was just a kid, but all of the nurses and staff knew to come to me. I figured, ‘Hey, these people are working overnights too, so I’m going to hook them up!’ They would all tell each other to get their food from me because I took care of them. What I learned is that the one underlying thing about food is it can bring people together. The love just grew from there.”

These days, Meyer is showing that love as half of Party Bear Pizza and Tiny Chef (4701 Morganford Road), the combination pizza-joint-Korean-spot inside the Silver Ballroom. Tasting Meyer’s wonderful cooking, you’d think she’d been making Korean food her entire life, but as she explains, it’s a culinary style she came to as an adult after beginning to explore her identity.

“I was adopted [from South Korea] as a baby and grew up in rural Missouri, surrounded by predominantly white people,” Meyer explains. “I’d get bullied a lot for being different; when I was a kid I hated the fact that I was different. I wanted to fit in and be that girl with the blond hair and blue eyes, but instead, people made fun of me. I never embraced my culture.”

That would change when Meyer discovered a Facebook group for Korean American adoptees. There, she found a community of people who had experiences similar to hers, and she was struck by the shared identity issues they had growing up in predominantly white neighborhoods.

As she began connecting with people through the group — some of whom had traveled to South Korea to find out more about themselves — she felt the pull to dive in and learn about Korean history and culture. As it had throughout her life, food captured her, and a lightbulb went off.

“When I started learning about my roots and my culture and where I came from, I realized something,” Meyer says. “It made sense, like, ‘This is why I love this.’ I’ve always loved spice and pickles and fermented foods and pork. It all made sense.”

By the time she started her exploration of Korean cuisine, Meyer was already a proficient cook and had spent most of her working life in kitchens. This background gave her tools to dive headfirst into learning how to prepare Korean specialties, and the more she got into it, the more she felt like important aspects of her life were coming together.

Meyer dreamed that, one day, she would be able to have her own Korean restaurant, and she even tried her hand at catering. However, it wasn’t until an opportunity at the Silver Ballroom presented itself that she decided to go for it in earnest — with a little prodding from her partner in life and in business, Chris Ward.

“Chris and I were in a pinball league at the Silver Ballroom, and another business was running the kitchen,” Meyer recalls. “They left and it was vacant, so we figured we should jump on it. Chris wanted to do pizza, and at first I told him we should go with that and that I would support him, but he was adamant that I should create my own food. I realized that it was now or never. I could either keep working for other people and produce their food or see if people like mine. I figured, ‘Why not?’ Everyone should try to follow their dreams in life.”

Meyer and Ward decided to team up and combine their concepts into Party Bear Pizza and Tiny Chef, a food counter that would serve the food that they both best liked to make. Last April, they opened their window to the public, an experience that Meyer admits was completely nerve-wracking.

“I was terrified,” Meyer says. “I even had a job lined up if we failed. I didn’t have full confidence, but we sold out the first week, and it was a major confidence boost to keep going. The same happened the next week, and after that I started doing specials that were warmly received. I felt like, ‘OK, this is great. I’m doing this.’ It was so surprising.”

Now, almost a year later and with a legion of loyal followers, Meyer feels as if she has hit her stride while learning something new every day. The more she learns, the more she feels connected to her heritage, which is the reason she takes the time to make everything from scratch — even the ingredients that are readily available pre-made, like tteokbokki, the Korean rice dumplings.

“People ask why I go through all of this work, but I feel like I am learning about myself when I make things from scratch,” Meyer says. “Now I’m so proud of being Korean and my culture. I still put my own spin on the food, but I respect the tradition and the history. I’m having so much fun and want to keep learning and doing as much as I can.”

Meyer recently took a break from the restaurant to share her thoughts on the St. Louis restaurant scene, her not-so-secret dance talent and why she’d use her superpowers to feed the world.

What is one thing people don’t know about you that you wish they did?
I’m self-taught! I don’t have an omma or halmoni I can refer to for family recipes, so I’m creating my own through research and practice. While I’m prepping, I love having street-food videos playing in the background. If anything sparks interest, I’ll pause and mentally take notes. I also remember every recipe for every special I do by memory.

What daily ritual is non-negotiable for you?
Walks and playtime with my dog, Molly. She’s the longest relationship I have ever had, and she’s my baby!

If you could have any superpower, what would it be?
So, Japan has this superhero named Anpanman. He was created by bakers and is a man with a giant red bean bun for a head. He lives in the bakery with his creators and his dog, Cheese. His main superpower is literally breaking off pieces of his head so he can feed the hungry. When his head is depleted, he just has a new head baked for him. It’s incredible! I’m always trying to feed everyone I’m around, so I can relate most to Anpanman. I would just love to feed all the hungry people, everywhere and all the time. Everyone needs to eat.

What is the most positive thing in food, wine or cocktails that you’ve noticed in St. Louis over the past year?
St. Louis and its food, to me, is a giant celebration of cultures and their histories. In south city, I love that you can find an amazing Asian grocer and just down the street, Latin and African grocers close by. I love that you can get a dish and learn about the history of it from the creators. There’s a passion here for food that I’ve found hard to find elsewhere, and I am so proud and honored to be a part of it. Since opening my own place, I have received a lot of love from local restaurant owners as well. I love that we all have a passion for supporting one another.

What is something missing in the local food, wine or cocktail scene that you’d like to see?
More food shelters or pantries for those who need it for themselves and their families. Again, everyone has to eat!

Who is your St. Louis food crush?
Well, of course, my partner Chris Ward will always be my number-one crush. However (sorry Chris), I have been going to Truc Lam for the past fifteen years, and the women that run and cook there are always on point with flavor and quality and they’re incredibly kind and beautiful. They have been my crush for a very long time.

Who’s the one person to watch right now in the St. Louis dining scene?
Oh, this is a doozy of a question. There are so many amazing and talented people working in the industry right now, so it’s impossible to narrow it down to just one. Nick Bognar and his staff at Indo have been getting so much deserved attention. The food there is like a beautiful dance in your mouth. Ben Welch of the Midwestern has my favorite pastrami in the world. Casey Jovick of Jovick Brothers [Spice Blends and Spice Rubs] is doing amazing things with spices and dry rubs. Eugene Kolb is super inspiring and has natural talent and drive that you can’t teach.

Which ingredient is most representative of your personality?
This is hard, but I think rice. Rice needs time to grow. A single grain may seem small, but after time, it can be the main part of a dish while still lifting and supporting those that surround it.

If you weren’t working in the restaurant business, what would you be doing?
I would still be doing something to express myself artistically. I’ve been in multiple local bands and also used to tap dance! I still will occasionally bang on a drum kit and break out the tap shoes.

Name an ingredient never allowed in your restaurant.
Well, I know Chris and I are both owners, but you will never see ranch on my side of the menu. Hidden Valley should have remained hidden. I realize it’s a lot of people’s go-to dipping sauce, but once you cover something in ranch, it just tastes like ranch. It doesn’t lift flavors — it covers them.

What is your after-work hangout?
I will either go straight home to my dog or sometimes to the gym. I don’t have much of a social life anymore. Also saying I sometimes go to the gym is a good reminder that I need to go to the gym.

What’s your food or beverage guilty pleasure?
Instant noodles! But the ones you can only find at an Asian market — not that Top Ramen stuff. I don’t cook big meals for myself, and they are my favorite alone meal. I even have a specific ramen pot designed only for noodles. You’d be surprised at how many different amazing instant noodles there are. If you need any recommendations, come see me.

What would be your last meal on Earth?
Whatever it may be, may anyone’s last meal be surrounded by the people they love. People are also a key ingredient to a great meal. For me, it would be at a local Korean barbecue place with my partner and friends, complete with plenty of soju!