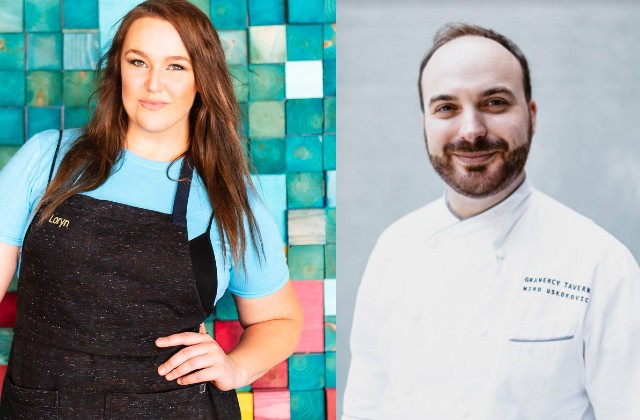 In some ways it's hard to believe that Balkan Treat Box (8103 Big Bend Boulevard, Webster Groves; 314-733-5700) cooked its first wood-fired pide and somun for service at its brick-and-mortar just one year ago.

Thanks to its early years as a wildly popular food truck, Balkan already feels like a part of the fabric of the St. Louis-area food scene. In other ways, we're regularly reminded that it's still a new concept for many, including the national publications that regularly laud its Bosnian-inspired food.

Now, to celebrate the first anniversary of its brick-and-mortar restaurant, chef-owner Loryn Nalic will be hosting an extra-special installment of her Good Magic Dinner Series, which features collaborations with other talented chefs.

On Monday, February 24, Nalic will get in the kitchen at Balkan with Miro Uskokovic, executive pastry chef of Gramercy Tavern, the James Beard award-winning restaurant in New York City. (Gramercy Tavern is owned by restaurateur Danny Meyer, a St. Louis native who has made a name for himself as one of the top hospitality pros in the industry.)

Uskokovic spent his youth on a family farm in Serbia before moving to the U.S. to work in the culinary industry. He attended culinary school at the Culinary Institute of America, and prior to his tenure at Gramercy Tavern, which began in 2013, Uskokovic worked as pastry sous chef at Jean-Georges and pastry chef at Aldea.

At the Good Magic dinner, Nalic and Uskokovic will serve guests a meal inspired by traditional Balkan fare as well as dishes drawing inspiration from India.

“It’s an honor to have an acclaimed chef from New York who also happens to be from the Balkans himself to take part in our Good Magic series," Nalic said in the release. "Opening Balkan Treat Box as a restaurant has allowed me to connect with so many amazing chefs who share my passion for Balkan food around the country. I have been following Miro’s work for years and I always find inspiration when he showcases Balkan style cuisine in his work. From the first moment I recognized his talent I’ve wanted to work with him. So, this is beyond an exciting opportunity!”

Uskokovic is similarly excited to cook with Nalic and explore the flavors of his childhood at the Good Magic dinner.

"For so long, I've been following and admiring Loryn's work at Balkan Treat Box," Uskokovic says. "Her deep knowledge and skillful execution of Balkan food is absolutely inspiring. I cannot wait to jump in the kitchen and work alongside her, but first I need to gorge myself on her sumptuous creations — all of my childhood favorites from growing up in Serbia like cevapi, fluffy somun and pljeskavica! I am thrilled to explore with Loryn the interesting connect between the food of the Balkan region and the Indian subcontinent. Here's to making more Good Magic!"

Guests can expect a five-course meal with craft cocktails, local beer and wine pairings curated by sommeliers Carmen Estrada of Balkan Treat Box and Charlie Ludwig of The Oven Indian Cuisine in Lincoln, Nebraska. Tickets cost $150 including tax and gratuity and will soon be available to purchase here.

Nalic debuted the Good Magic series in September as a way to spotlight her approach to "global cuisines and cooking styles in collaboration with guest chefs." The first dinner saw Nalic collaborate with lauded chef Nate Hereford and subsequent events have featured the cooking of chefs such as Amanda Elliott from Columbia, Missouri, and Jake Sciales of Sciales Catering in St. Louis.