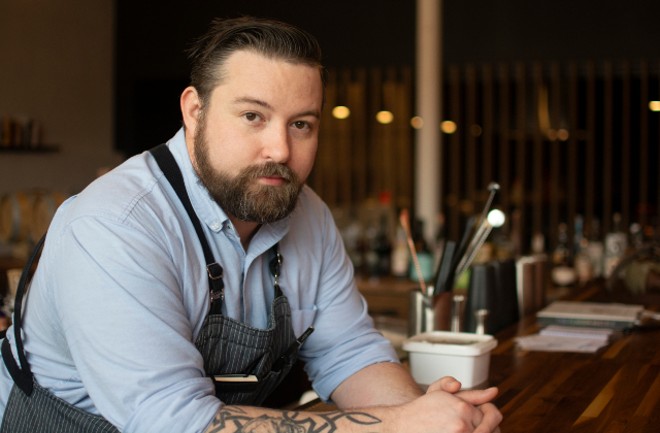 Andy Printy’s father was a woodworker, one so renowned for his craft that he had articles written about him. It seemed natural that his son would follow in his footsteps, so he gave the younger Printy an after-school job in his shop to teach him the ways of the trade. It did not go as planned.

“Everyone expected me to be his protege, but I was really bad at it,” Printy recalls. “Then my dad told me about how his dad was a mechanic and everyone expected him to be one, but he was terrible at that. He remembered what it was like not to be able to do something, so he was really supportive of me.” As the beverage director at Bulrush (3307 Washington Avenue, 314-449-1208), Printy laughs at the fact that there was a time he felt unsure about his path. He’d always been fascinated by food and beverage, whether as a young home cook prepping meals for his siblings or as a young adult more interested in learning about spirits than simply getting drunk.

However, Printy never really considered the beverage industry as a career. In fact, he wasn’t really sure what he wanted to do with his life, so at the prompting of his friend, he enlisted in the U.S. Marine Corps right out of high school. The plan was to become a police officer after he got out of the military, but a part-time job as a doorman at a bar made him change his course.

“I was twenty years old, working at a bar called the Green Leafe Cafe in Williamsburg, Virginia, making $4 an hour cleaning bathrooms,” Printy recalls. “I had a buddy there who was a bartender, and when I found out how much they made on a Saturday night, I lost my mind. I asked what it would take to get me behind the bar, but back then you had to really earn your comeuppance as a barback before they’d let you bartend. I spent about two years schlepping trash and memorizing Budweiser labels. When I got my first daytime shift, I was so excited. I don’t think I’ve ever been that happy to cut lemons.”

Printy instantly loved the restaurant industry, and when he moved with his friend to Cincinnati, he continued his education in the field. He worked a job in the back of the house, and though he enjoyed that side of the business, he knew bartending was his true calling. When he returned to his hometown of Springfield, Missouri, he went all-in. He got a job in one of the few bars in town making true craft cocktails and catering to a clientele that wanted more than packaged mixers. He began experimenting behind the bar and researching drinks.

“People were there getting Grey Goose and Red Bull, but there were also people coming there who’d had experiences in Brazil and wanted a caipirinha, not a pre-made mojito,” Printy says. “I had to learn how to make things properly. I realized then that there was more to this than popping bottles.”

Printy yearned for a bigger audience, so when his then-girlfriend moved to St. Louis, he decided to join her. Here, he worked at the now-shuttered Cielo inside the Four Seasons Hotel St. Louis alongside former Blood & Sand co-owner Adam Frager, then left the hotel to work at the former Luciano’s in Clayton and the Block in Webster Groves before moving to Kansas City. There, he continued to hone his craft at Gram & Dun in Country Club Plaza before returning to Springfield to be closer to his family following the death of his grandmother.

Printy appreciated being back home, but he knew he needed to move to a larger market in order to keep pursuing his career in the beverage industry. He decided to head east instead of west, landing again in St. Louis and running the bar at Sanctuaria in the Grove. He relished working at a place so steeped in the city’s cocktail culture, but after two years, he felt like he needed a new challenge. He found just that while working at Mission Taco Joint in the Central West End. So when a friend told him that the acclaimed Ozark-inflected Bulrush was looking for someone to run its beverage program and she suggested that he apply, he balked.

“I had the confidence to do the job, but I didn’t think they would be interested in me,” Printy says. “But I got the job, and it’s been great to work somewhere that has more in mind than the bottom line. Rob [Connoley] wants to tell a story and for people to have an actual experience and try things they normally wouldn’t order. That’s been cool for me because I get to do challenging things.”

Some of those challenges include the fact that Printy is both using ingredients not traditionally found behind the bar and not using things considered cocktail staples. For instance, he doesn’t use citrus, which he admits took a minute to get used to. Now that he’s gotten his feet underneath him, however, he embraces the challenge.

“At first, I felt like a fish out of water,” Printy says. “It took me some time to really understand where chef is coming from as well as work on things that fit the concept and pair well with the tasting menu. It took a minute to get schooled on the process, but I’m glad I’ve had the chance to do so. That passion is why I got into this in the first place.”

Printy recently took a break from his work at Bulrush to share his thoughts on the St. Louis food and beverage community, why he wishes he had super speed and why he considers himself to be a lot like a certain bitter Italian liqueur.

What daily ritual is non-negotiable for you?
That first cup of life-giving black coffee.

If you could have any superpower, what would it be?
Super speed? There never seems to be enough time in the day!

What is the most positive trend in food, beer, wine or cocktails that you’ve noticed in St. Louis over the past year?
I like that there has been awareness to not pressure our fellow industry folks to drink. Every. Day. We’re even seeing how much better our products and hospitality have gotten from those of us not drinking on shift all the time.

What is one thing missing or that you’d like to see in the local food and beverage scene?
I’d like to see more brands chase bartenders and their abilities, versus the other way around.

Who is your St. Louis food or drink crush?
Natasha Bahrami [at the Gin Room] is the G.O.A.T.

Who’s the one person to watch right now in the St. Louis food and beverage scene?
I continue to be a big fan of Joe Konroy at the Bao.

Which ingredient is most representative of your personality?
Amaro! A little bitter, old and seemingly unapproachable ... but after just a little time, it really opens up.

If someone asked you to describe the current state of St. Louis’ food and beverage climate, what would you say?
It’s been on “simmer” for a bit, but I can feel it starting to really heat up lately.

If you weren’t tending bar, what would you be doing?
Probably trying and failing at stand-up comedy.

Name an ingredient never allowed behind your bar.
I don’t know if anything is ever off limits, but I do try to keep overly sweetened ingredients at the very minimum. We’re already dealing with so much sugar in our spirits.

What is your after-work hangout?
I don’t get to go as often as I like, but Parlor really helps me wind down and embrace my Peter Pan syndrome.

What would be your last meal on Earth (including drinks of course)?
It would have to be a repeat of my favorite experience: the pheasant and Maytag blue cheese sliders with a Pisco Sour from Sable in Chicago. 