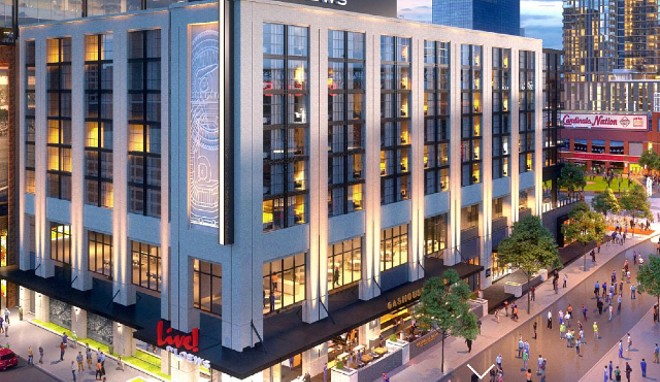 The next phase of Ballpark Village expansion will debut on February 26 when Live! by Loews opens in downtown St. Louis at 799 Clark Avenue.

The luxury eight-story hotel features 216 rooms and plenty of opportunity to pamper yourself, apparently, with "upscale amenities," as well as a "sleek minimalistic design and spacious layouts with floor-to-ceiling views of neighboring Busch Stadium and Ballpark Village," according to a release.

In addition to the hotel, Live! by Loews will introduce four new dining and drinking destinations all themed around bourbon: Clark & Bourbon, Bar Bourbon, the Bullock and River Market. Executive chef Matt Lange will lead the kitchens at all four spots, with Geneya Sauro working as general manager.

“We are thrilled to be a part of the revitalization of downtown St. Louis and Ballpark Village and look forward to bringing a new standard of hospitality to the area when we open our doors,” Sauro said in the release. “We look forward to being a destination for the community to gather and be entertained, as well as a sought-after home base for visitors exploring downtown St. Louis.”

To learn a little more about the mostly bourbon-focused concepts opening soon at Live! by Loews, we now turn to the concept descriptions as outlined in the release:

Clark & Bourbon: "Downtown’s only classic steakhouse will feature an exposed kitchen, a variety of high-end cuts of meat, delectable sides and a mixology prep lab in the bar where chefs and mixologists work side by side. The centerpiece will be the Bourbon Room, also available for private dining, which will offer an extensive selection of bourbons, both mainstream and rare finds."

Bar Bourbon: "Referred to as the hotel’s 'living room,' Bar Bourbon will be a stylish central gathering place and double as an exclusive aging room filled with a vast bourbon selection and pre-batch barrels. Located in the center of the open concept lobby, Bar Bourbon will feature communal seating, a dramatic fireplace and an indoor and outdoor bar space, with a patio facing Busch Stadium."

The Bullock: "Perched on the second-floor terrace, the Bullock will be an indoor and outdoor bar and lounge that overlooks all the action of Cardinal Nation, Ballpark Village and Busch Stadium. The prime space, also available for private celebrations, will serve a mix of handcrafted cocktails and classic American cuisine."

Live! by Loews is a joint venture between Loews Hotels & Co., The Cordish Companies and the St. Louis Cardinals.