Chao Baan's Lindsey MacTaggart on Her Unlikely Path to Bartending 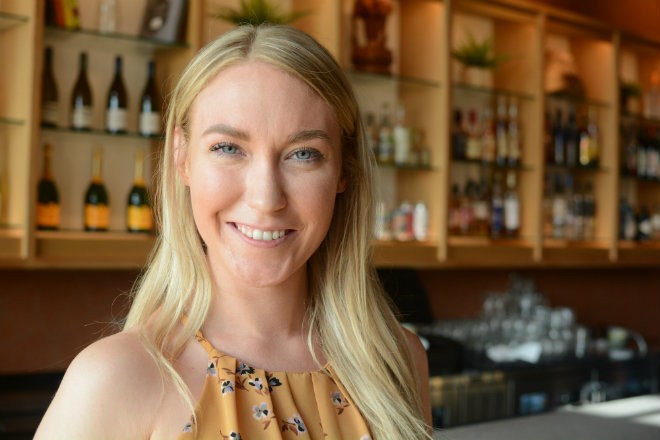 Although you’d never know it if you ordered a drink from her, Lindsey MacTaggert is shy — or at least she was until she got into bartending.

“When I was in college in Arizona, I started bartending at a big college sports bar,” MacTaggert recalls. “I was really shy, and bartending helped me get out of my shell. I loved the adrenaline rush and getting to meet random people. Being behind the bar broke the ice rather than just walking up to a stranger did.”

As beverage director at Chao Baan (4087 Chouteau Avenue, 314-314-925-8250), MacTaggert has come quite a long way from the high-volume college bars where she got her first taste of the industry. However, her path to the Thai spot in the Grove was not always straight. MacTaggert entered college without a clear plan for what she wanted to do with her life and ended up with degrees in linguistics and astrophysics. She found herself doing data analysis for her university’s physics department in the planetarium until she graduated.

Oddly enough, that physics job would lead her back to the restaurant industry. Using her numbers background, she was able to get a job in office management and accounting for a restaurant group in Chicago. Though she enjoyed getting the chance to see what went on behind the scenes, she got bored with the administrative side of the business and longed to get back behind the bar.

MacTaggert got her chance to do just that by working at Shaw’s Crab House in Chicago. There, her passion for food and bartending really blossomed as she found herself surrounded by both guests and co-workers from all over the world with different tastes. The experience inspired her creativity behind the bar, which took full flight when she later worked at the Aviary. At the acclaimed Chicago bar, MacTaggert got to try out recipes that approached cocktails from an “extreme culinary standpoint.” The chance to play around with fresh ingredients and get into the chemistry underlying the libations appealed to both her passion for food and her scientific background, and she found herself wanting to learn as much as she could about the craft.

After the Aviary, MacTaggert moved to St. Louis, where she found work helping to develop the bar program at Twisted Tree and Billie-Jean, managing the bar at Taste and bartending at the Preston inside the Chase Park Plaza Royal Sonesta St. Louis. Her gigs kept her plenty busy, but an Instagram post by the general manager at Chao Baan piqued her interest. Enamored with the gorgeous food photos, she became interested in the restaurant in general; when she found out they were hiring a bartender, she knew it was something she had to pursue.

Working alongside Chao Baan’s general manager, Kurt Bellon, MacTaggert has welcomed the opportunity to help develop the restaurant’s cocktail list, drawing her inspiration from the restaurant’s vibrant food and the ingredients she finds while poking around the kitchen. Her experience at Chao Baan has also instilled in her a passion for Thai food and beverage, and she has devoted a good amount of time to learning about its food culture in order to pay homage to it behind the bar.

Still, MacTaggert admits that the scientific side of her has plans that go beyond bartending. Currently enrolled in a chemical engineering program, she hopes to one day combine her passion for bartending and science by opening her own distillery. Though she still has a long way to go to make that happen, it’s a goal that has personal meaning to her.

“Food and beverage will always be a part of my life,” MacTaggert says. “My dad’s side of the family is from Scotland, and I have always loved and had a fascination with Scotch. If I could make my own single malt whiskey here, that would be really cool.”

MacTaggert recently took a break from the bar to share her thoughts on the St. Louis food and drink scene, the importance of centering herself every morning and the one ingredient you will never find in her drinks.

What is one thing people don’t know about you that you wish they did?
That I love science. Anything I research behind the bar is taken down to the chemical level in order for me to completely understand what I’m working with.

What daily ritual is non-negotiable for you?
Morning cold brew and some stretching. I love the chance to center myself in the quiet morning hours before a hectic day on my feet!

If you could have any superpower, what would it be?
Probably the ability to teleport. Traveling is a love of mine that I don’t get to experience often enough because of my busy schedule.

What is the most positive trend in food, beer, wine or cocktails that you’ve noticed in St. Louis over the past year?
New restaurants opened by people that have been in the industry for most of their lives. There’s a different depth of love and passion that comes through and is fueled by experience and understanding of a restaurant. That type of commitment can only come from someone who has been in the trenches.

What is one thing missing or that you’d like to see in the local food and beverage scene?
I would like to see more fresh fish but understand that’s tough in the Midwest. I’m a big fan of what Indo has brought to St. Louis: The fish options are always fresh and exciting.

Who is your St. Louis food or drink crush?
Dave Greteman, the bar manager at Elmwood. His drinks are some of the best in the city.

Who’s the one person to watch right now in the St. Louis food and beverage scene?
Nick Bognar is definitely someone to watch right now. Watching him work is truly inspiring and I hope he opens more restaurants.

Which ingredient is most representative of your personality?
I would have to say Falernum. It’s spicy, sweet and gets itself into a lot of boozy situations — ha.

If someone asked you to describe the current state of St. Louis’ food and beverage climate, what would you say?
Growing. From the time I moved here about two years ago until now, there have been so many great places that popped up, and it just keeps getting better and better.

If you were not tending bar, what would you be doing?
I am about to work on my master’s in chemical engineering. My goal is to end somewhere in that realm or perhaps to take that experience and start my own distillery.

What is your after-work hangout?
Parlor, the Gramophone, or Gezellig. Basically, any place in walking distance from work that serves good beer and Fernet shots is a place you’ll find me at.

What’s your edible or quaffable guilty pleasure?
Tiramisu. I order it any time I see it on a menu. If you see tiramisu at La Patisserie Chouquette, do yourself a favor and get one!

What would be your last meal on Earth (including drinks, of course)?
There would be too many courses and chefs to name for this one. Definitely it would be seafood-forward with Asian inspiration, great wine pairings and finished with a rye Manhattan.