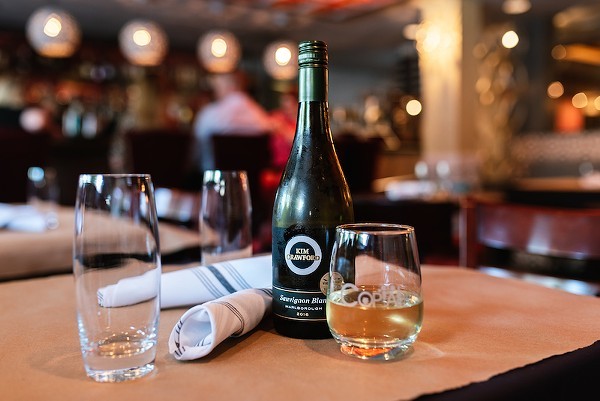 Update: After this story was published on Wednesday afternoon, another reader tip indicated that Copia West County owner Amer Hawatmeh has recently been involved in a legal battle with West County Center, where his restaurant was a tenant.

Public records show that in November West County Center filed suit against West County Foods LLC, dba Copia III, for unpaid rent and possession of the space. On Monday, Judge John F. Newsham ruled that Hawatmeh could remove certain items from the premises but not attempt to take furniture, fixtures, table, chairs or any other items glued, bolted or otherwise affixed to the premises.

Here is the full order from Judge Newsham:

"By consent of the parties, defendants West County Foods, LLC dba Copia III and Amer Hawatmeh are enjoined, as well as their agents, attorneys, employees and those working with them from removing any items from the leased premises at 1085 West County Center, dba Copia, with the exception of the items listed below, but including any furniture, fixtures tables, chairs and any items glued or bolted or otherwise affixed to the premises any from otherwise damaging the reused premises. Excluded items are as follows: food and beverage inventory, equipment owned by vendors, "Smallware" (I.E., tongs, spatulas, etc.) from the "Back of house" and glassware bearing the name"Copia".

With this new wrinkle, it seems safe to say that Copia West County isn't just temporarily closed — reader, we're gonna wager that it's shuttered for good.

A call to Hawatmeh was not immediately returned.

Just shy of its first anniversary, Copia West County (1085 West County Center Drive, Des Peres; 314-241-9463) has confirmed to the Riverfront Times that it is temporarily closed.

We first learned of the news from a reader, who tipped off the RFT that Copia West County was no longer answering its phone and that guests could no longer book a reservation online.

Our interest now piqued, we made a trip out to Des Peres to see what we could learn. Upon arriving at the restaurant and bar yesterday evening we were greeted by staff members who said that the restaurant was closed for regular business. A friendly crew member let us know that we could buy a bottle of wine as a retail purchase and drink a glass or two on-site. We declined, but only because there's nothing fun about drinking a $40 bottle of Chardonnay alone in a giant, empty restaurant. Staffers didn't seem confident that the restaurant would reopen for regular business, but an inquiry to management told a different story.

Today a representative from Copia West County confirmed that the closure was temporary due to a water main break underneath the building.

"We have had a main water main break under the building and have closed the kitchen at this time until we know the extent of the damage," read the reply.

Owner Amer Hawatmeh opened the Des Peres location last January following the closure of the flagship location in downtown St. Louis, which operated for more than a decade. At the time, Hawatmeh told the St. Louis Post-Dispatch that he couldn't sustain the business due to neighborhood leadership, limited or expensive parking and protests.

By that point, Hawatmeh had already expanded Copia to a location in downtown Clayton at 7822 Bonhomme Avenue. In June, St. Louis Magazine reported that the Clayton spot had rebranded as Copia Lounge, restaurant and wine bar. Roughly a month later, the Clayton location closed for good.