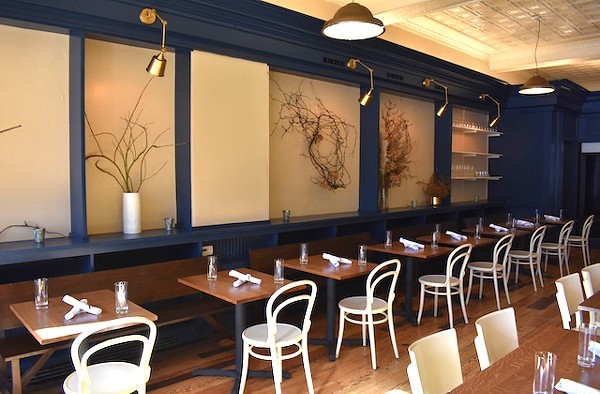 University City just got a lot more delicious after dark thanks to restaurant power couple Michael and Tara Gallina.

Located in the former Winslow's Home space, Winslow's Table (7213 Delmar Boulevard, University City; 314-725-7559) debuted in November. At the time, the restaurant only served breakfast and lunch, but now the Gallinas and crew have added dinner service.

The renamed and reimagined concept is the second area restaurant from the Gallinas, who operate the acclaimed Vicia (4260 Forest Park Avenue, 314-553-9239) in the Central West End. Longtime Vicia sous chef Alec Schingel is leading the kitchen at Winslow's Table, serving a menu inspired by the seasons and combining the casual atmosphere of Winslow's Home with the seasonal fare that's made Vicia famous.

"Knowing that this was a second restaurant for us, I think we felt a little more free to make it some things that we were excited about and not feel like we have to fit the menu into one particular box," Tara says. "We're not trying to make this a fine-dining restaurant, so we thought we could have some fun with dishes that are a little more casual, a little more everyday. There's definitely some carryover in terms of the cooking techniques you'll see at Vicia, but in a format that I think is a little more approachable."

The dinner menu is divided into several different sections, beginning with a list of artisan cheeses, charcuterie and accompaniments perfect for sharing with a group. "The first section of the menu, cheese and charcuterie, is something we've always loved and want to continue to share with people," Tara says.

Meanwhile, other dishes hail from across the globe, including skewers with lamb and beef kefta, pork schnitzel and sausage, chicken and dumplings with Parisian gnocchi, and a French-style omelet with Maine crab.

"Alec definitely had a lot of touches all over the menu — Michael was excited to give him the opportunity to really step up and do some things he was excited about," Tara says. "The thing that comes to mind the most is the chicken and dumplings, which is really good, and it's not what you expect in some ways — it's really flavorful but it's light. It's not the heavy dumpling dish you might be more familiar with; it's a very light Parisian gnocchi that's super pillow-y with a flavorful broth and this nice chicken and winter root vegetables. It's really comforting and just what you want to eat when it's cold out."

Tara says that Michael worked on the schnitzel recipe for the past nine months or so. The dish is served with housemade pork sausage and raclette cheese in the center, "which is really delicious," she adds.

"We're also really excited about the roasted carrots dish — I think that's a good example of how there isn't just one cuisine on the menu," Tara says. "There's a lot of flavors that you might recognize from other cultures: There's a spice to it both in a heat sense and in a toasted spices sense, and then also just a really bright, refreshing flavor from the sorrel. It's got great texture and color and is just a really nice way to start a meal."

Meanwhile, with the skewers, the Gallinas hope to carry over an important element of the dining experience at Vicia: the grill.

"We have a huge wood-burning grill at Vicia, which we don't have at Winslow's, but we wanted to find a way to still incorporate a grilled aspect into the menu," Tara says. "So we have a small, more hibachi-style grill, and originally the idea was loving yakitori and getting skewers of different flavorful meats and vegetables. That part of the menu is really meant to customize the experience; you pick your base and then your skewer that goes with it, and there really isn't a wrong way to order."

Don't fill up on your starters and main course, though, as you can end your meal on a sweet note with treats from the restaurant's bakery or a bowl of ice cream sourced from St. Louis-based Clementine’s Naughty & Nice Creamery.

Winslow's Table is also now serving a full beverage program including wine, beer and signature cocktails (including N/A options) developed by Vicia bar manager Phil Weaver Ingram. Tara says the restaurant secured its liquor license in early December and has been selling Bloody Marys, mimosas and wine for breakfast and lunch crowds ever since, but now with the new dinner menu, that program can expand.

"Now that we've moved into dinner we've added more cocktails and then we'll eventually be growing the wine list as well," Tara says. "We're starting small to see what people are into and respond to and we look forward to adding more bottle selections soon."

Reservations aren't currently being accepted for dinner but Tara says that will change as of February 1. For diners who don't want to roll the dice, head to the restaurant's Yelp page to put your name in ahead of your visit via the Waitlist feature.

"I'm excited to finally offer dinner reservations, because I think it's something the neighborhood and regulars at Vicia have been excited about," Tara says. "The two months since we opened went by really fast, but it was really important to Michael and I to take our time with it before expanding. We've got the team in place now, and it will be an evolution — elements of the menu will change, especially with seasonal ingredients. We'll see what people love and adapt from there."

See related PDF WT_Night_Opening_Menu.pdf
Follow Liz Miller on Twitter at @lizzaymillah. We are always hungry for tips and feedback. Email the author at liz@riverfronttimes.com.