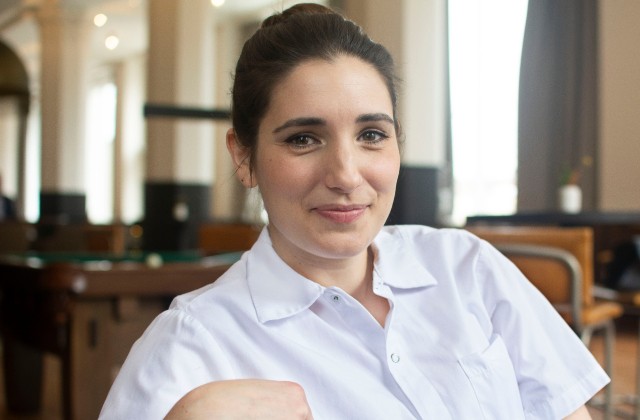 Growing up in Santa Monica, California, there was a strict line of demarcation in Suji Grant’s family kitchen. Her mother cooked. Her father baked. There was no crossover, and both were terrible at the other. This meant that Grant’s father was in charge of the birthday cakes, and he was always good about letting his daughter lend a hand, even if the results weren’t perfect.

“Up until I discovered my love of store-bought cake, my dad would make my birthday cakes,” Grant recalls. “I have such fond memories of those little teardrop-shaped bottles of food dye he’d use for making all the different colors. He’d always let me help. It would look terrible, but he’d let me do it anyway.”

Her time spent baking with her dad instilled in Grant, now the pastry chef at the Last Kitchen & Bar (1501 Washington Avenue, 314-390-2500), a passion for cooking, but she did not make the connection that it was something she should pursue professionally until she was in college and well into a biology degree. There, anytime she’d find herself overwhelmed with her schoolwork, she’d dream of making and decorating cupcakes. It was the one thing that got her to drift off to sleep when she was particularly stressed.

After graduating from college, Grant was unsure what she wanted to do with her biology degree. She knew she didn’t want to teach, and she was not enthused about becoming a doctor or a nurse. Unsure of what to do, she turned to cooking and got a job in a cafe, where she fell further in love with pastry as well as the restaurant business.

One of Grant’s good friends had recently moved to New York City, so she decided to join her there to attend culinary school. Grant enrolled in the Institute of Culinary Education, a six-month program, where she focused on pastry and made some connections that would secure her a job upon graduation. Her first gig was at the Lamb’s Club, followed by Lincoln Ristorante, where she worked for three years, then another Italian restaurant in the West Village.

Grant was doing well in New York and may have stayed were it not for a guy. Their relationship prompted her to move to St. Louis, and though it didn’t work out, she decided to stay.

“I bought a house and didn’t want to leave,” Grant explains. “At first, moving to a new city was hard, but my dog had a yard, I had started working at Niche [Food Group] and made friends. It got easier to be here.”

Grant worked for Gerard Craft’s Niche Food Group in its commissary, making pastries for Taste and Pastaria as well as the soft-serve ice cream for Brasswell. It was a good gig, but, having had the experience of running her own kitchen back in New York, she longed to again have that level of creative freedom.

She’d get the opportunity to do just that when she was introduced to Evy Swoboda through a mutual friend and colleague. Swoboda, who formerly cooked at Pastaria, was gearing up to open the Last Kitchen inside the Last Hotel, and she offered Grant the chance to run the restaurant’s pastry department. The role gave Grant full creative control of that side of operations and empowered her to try new things — even wedding cakes, which she’d been itching to do ever since she got her first taste of baking them in New York.

“When I worked at Lincoln Ristorante, they won the bid to do the wedding cakes for the Brooklyn Botanic Garden,” Grant explains. “It was fun doing them — I love the challenge, the problem-solving, having to fix stuff on the fly. Getting them to Brooklyn from Manhattan was crazy, but it was a good learning experience.”

Although Grant has been given free rein with the Last Kitchen’s pastry program, she doesn’t feel the need to push that into the direction of the esoteric. Instead, her pastries pull from the things she remembers fondly from the past and have a familiarity about them that she hopes will bring people joy.

Grant recently took a break from her pastry work to share her thoughts on not being a food snob, her love of QT cappuccinos and Rice Krispies Treats and why someone in St. Louis needs to open a proper New York-style bagel shop.

What is one thing people don’t know about you that you wish they did?
I’m not a food snob! Most people assume that because I’m in the business I’m picky about what I eat, or they get nervous to cook for me. The truth is, I love Taco Bell just as much as the next gal, and I will never be upset or critical about a home-cooked meal that I didn’t have to make. I love QT cappuccinos — this is probably one of the grossest things about me — and if you get more than one of us pastry girls together for dinner, chances are high that we’re eating Papa John’s pizza with garlic butter.

What daily ritual is non-negotiable for you?
Caffeine. I’m a real monster without it.

If you could have any superpower, what would it be?
Teleportation. I loathe driving.

What is the most positive thing in food, wine or cocktails that you’ve noticed in St. Louis over the past year?
The variety of cuisine that’s becoming available. It’s so exciting to watch restaurants open that are doing something a little different from what’s been classic St. Louis fare in the past.

What is something missing in the local food, wine or cocktail scene that you’d like to see?
Bagels. Seriously, someone please open a New York-style bagel shop. I will be there every week!

Who is your St. Louis food crush?
The team at Union Loafers can pretty much do no wrong. I could seriously eat their potato salad and pizza every week for the rest of my life.

Who’s the one person to watch right now in the St. Louis dining scene?
Sarah Blue. She’s at so many different places right now, and I’m really excited to see what she does in the post-Niche Food Group chapter.

Which ingredient is most representative of your personality?
Cloves, maybe? We can both be a little spicy at times…

If you weren’t working in the restaurant business, what would you be doing?
Remodeling houses. I gutted my kitchen last year, and I love the whole process of bringing something back together. Plus, it really challenges your problem-solving skills and creativity, which I also love.

Name an ingredient never allowed in your restaurant.
Prickly pear. Such a beautiful color but the flavor does nothing for me.

What is your after-work hangout?
My couch. I know, so lame, but welcome to my thirties. It’s an added bonus if one or both of my dogs are there too.

What’s your food or beverage guilty pleasure?
Rice Krispies Treats. It’s disgusting how many I can eat.

What would be your last meal on Earth?
Korean food. All the Korean food. Especially duk mandu guk, kimchi pajeon and dubu kimchi. Oh, and ginger-molasses cookies. We are always hungry for tips and feedback. Email the author at cheryl.baehr@riverfronttimes.com.