Imo's Schools St. Louis On the "Correct" Way to Eat Its Pizza 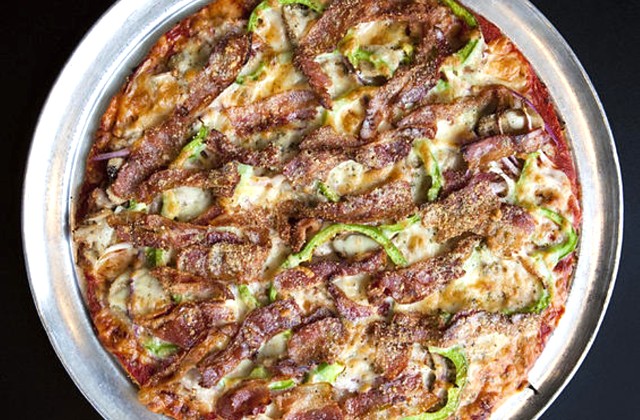 By now you've probably seen the viral subway seat Tweet and the many memes it has spawned — but have you seen the variation shared by St. Louis' own Imo's Pizza?

First, for the unfamiliar, here's the sitch: On Monday, Twitter user @leftistthot420 (one heck of a handle, if you ask us), posted the following pizza-themed version of the subway seat meme:

all my chicagoans... which piece are you picking up first pic.twitter.com/nMJ0Ygg8Iy


A little later in the day, Twitter user @lucaspeterson posted a different photo of a St. Louis-style pizza with ranking choices of his own (and later clarified that he'd missed the initial Tweet and didn't intend to copy it):


This is all very important background information because next Imo's upped the ante by responding to @lucaspeterson's Tweet saying that the slices were, in fact, ordered correctly on his image:

The numbers are shown in correct order. No. 1 is the appetizer to the rest of the pizza. Enjoy!


But were they really?

We here at the Riverfront Times take our pizza-eating skills very seriously, having dedicated some of our best years and arteries to the cause. Given this fact, we surveyed the RFT staff for their takes on the "correct" way to eat Imo's, and the reviews varied substantially.

"My method involves opening the dumpster lid and sliding it directly in," said one colleague.

Another staffer quite literally shared this middling take: "Crust first for Imo's always, because if you're going to eat it cold — which is the only way I can stomach it — it's best to have the middle pieces as leftovers. As the crust cools it dries into sharp shards ready to slice the roof of your mouth."

The reviews weren't all negative for Imo's, though — or at least not that negative. "The trick to eating Imo's is to fold the pizza in half like a calzone and house as much of it as you can in just a few bites. This ensures that the Provel doesn't have time to cool down — a state it can only recover from by reheating in an oven — and that you'll actually be full at the end of the meal, as the serving size for a large Imo's pizza is easily one."

For an insider take, we asked an editor who formerly worked as a delivery driver for Imo's to weigh in.

"The answer is three and four simultaneously," our colleague wrote. "This presumes you are a pizza driver and the pizza makers have just fucked up a pizza, making it fair game for the rest of the store's employees. In order to both eat before the other jackals swarm while not burning your mouth on the molten lava that is fresh-out-the-oven Provel, what you do is treat the border between three and four as a hinge, and flip three upside down onto four. This leaves you with crust facing out on both sides and all the toppings in the middle — something of a pizza sandwich. The advantage here is that you can grab that on your way out the door with a delivery and just throw it on top of your delivery bag. And when eating, you're less likely to burn the roof of your mouth, because you have a protective layer of crust in the way."

You heard it here first, folks: The correct way to eat Imo's is actually to make it into a pizza sandwich of sorts that you can eat on the go.

Do you agree? Disagree? Let us know in the comments.