Sad news, St. Louis: The first day of 2020 marked the last hours of business for Colino's Cafe & Bakery on the Hill.

The sandwich shop at 5141 Wilson Avenue was most recently run by Cathy Consolino; the cafe was renamed after she took over operations this summer. The space had long been home to Amighetti's, which operated in two locations in the neighborhood for more than 100 years. In 2016, Anthony Favazza purchased the recipes, brand and naming rights to Amighetti's. Favazza runs the Amighetti's location at 9631 Manchester Road in Rock Hill.

Dominic Consolino had been operating the Hill location since 2014 when Favazza took over. Years earlier, John Stackle and a business partner operated several locations of Amighetti's beginning in 1995; Stackle purchased the Hill location from Marge Amighetti. In August of that year, John and his wife, Susie, had taken over the locations in Rock Hill and on the Hill.

When the Stackles decided to retire in 2016, they offered Dominic Consolino the chance to buy Amighetti's trademark (including its name and recipes). Reached by phone on January 5, Susie Stackle says that Consolino declined the purchase and so the trademark was sold to Favazza, who maintained the same licensing deal with Consolino.

This past summer, Consolino says that Favazza informed him that he would be taking back control of the Hill business due to a series of operational and quality-control disagreements — including a heated dispute concerning pepperoncini — but Consolino had other plans.

"It is with a heavy heart that we announce the temporary closing of Amighetti's on the Hill. The owner/operator of that location hasn't lived up to the Amighetti standards for more than two years. People often refer to that location as 'the original' Amighetti's location. It's not. From 1916-1921, Amighetti's was  located a few blocks away. We will reopen on the Hill as soon as possible. We remain open in Rock Hill on Manchester Road. We discussed the developments with Mrs. Amighetti this morning. She said that we 'have her full support.'"


Due to a non-compete agreement, Dominic Consolino couldn't open another sandwich shop or deli in the space for two years, so he sold the cafe to his wife, Cathy, as first reported by St. Louis Magazine. The menu at Colino's Cafe & Bakery was similar to Amighetti's yet not identical.

For the Consolinos, staying put on the Hill was personally meaningful. The cafe was named after Charlie "Colino" Consolino, Dominic's paternal grandfather, who owned D. Consolino's Market on the Hill in the 1940s with his wife. "Colino's is owned and operated by Cathy Consolino who continues the legacy of Consolino family involvement in The Hill, now for 100 years and counting," the business shared on Facebook in August.

This past Wednesday, January 1, Cathy Consolino announced that Colino's had shuttered for good in a Facebook post "due to legal fees that have been spent defending myself against a lawsuit."

"The funds that had been set aside for operations at the cafe have been spent (and then some)," she said in the post. "I want to thank family and friends who have been so very supportive in my attempt to keep a family tradition alive."

In August, Favazza filed a suit against the Consolinos "alleging the owner of the new sandwich shop has violated their licensing agreement," as reported by the St. Louis Post-Dispatch. “It’s a complete scam,” Favazza told the Post-Dispatch at the time. “It’s obvious it’s the same people in the same space doing the same thing.”

The Consolinos' attorney, David Weiss, told the Post-Dispatch that Dominic's non-compete agreement with Amighetti's does not apply to Cathy and that Colino's was not using the exact same recipes as Amighetti's, as Favazza claimed.

“She’s not a shareholder to that agreement,” Weiss told the Post-Dispatch in August. “She never was. She was an employee at Amighetti’s just like anybody else there. She happens to be married to Dominic.”

Additional court documents filed in August show that a temporary restraining order was granted against Catherine Consolino and Dominic Consolino by Genitori LLC at 9631 Manchester Road — the address of Amighetti's Rock Hill location, owned by Favazza. As of December 10, the temporary restraining order has been upheld and extended by Judge Joseph L. Walsh III until "such date that the preliminary injunction shall be heard."

In a call with the Riverfront Times this afternoon, Dominic Consolino declined to comment about the closure further, directing customers to the restaurant's Facebook post. Outside of the now-closed Colino's, though, in front of butcher paper-lined windows, signs declaring "something amazing happening!" have been posted. Dominic also declined to comment about the signs.

A call to Favazza was not immediately returned. We will update this post with new information as we learn it.

Editor's Note: This post was updated on Friday, January 5 with corrections concerning ownership of the building at 5141 Wilson Avenue and the previous ownership of Amighetti's prior to 2016. 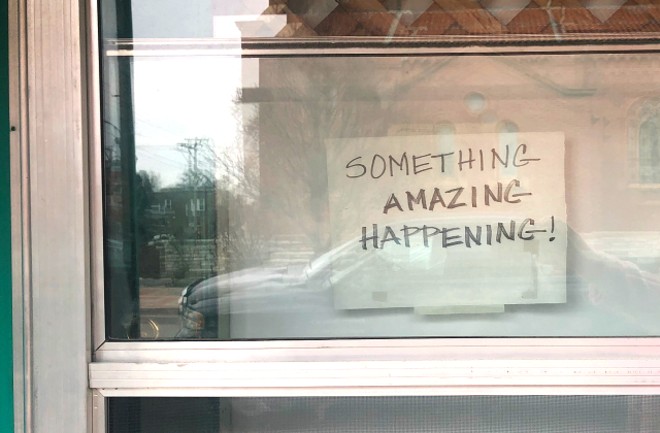