Ready to ring in the new year, St. Louis? Head to one of these 26 local bars or restaurants to celebrate in style.

Editor's Note: What did we miss? Let us know in the comments.

A.R.T Rooftop and Grand Tavern by David Burke: Ring in 2020 like it's 1920 with a night filled with glamour, glitz and Prohibition-era cocktails at Grand Tavern by David Burke (626 North Grand Boulevard inside the Angad Arts Hotel, 314-405-3399). Located atop the Angad Arts Hotel, A.R.T. (Angad Rainbow Terrace) kicks off the fun at 7:30 p.m. and will serve a five-course tasting menu prepared by executive chef Robert Cantu alongside Prohibition-era cocktails by beverage director Meredith Barry. Dubbed "the Walsh Experience," the event is said to be "a nod to the local cocktail parties hosted by Mrs. Clara Bell Walsh, a well-known St. Louis socialite. Her famous Sunday afternoon gathering in the spring of 1917 was called the 'first' cocktail party, and thereafter, she continued to balk social trends and make headlines by being the first hostess in St. Louis to hire a bartender to serve guests in her home." Thirty tickets to the rooftop celebration will be available for purchase at $145 inclusive of tax and gratuity.

Ballpark Village: Ballpark Village (601 Clark Avenue, 314-345-9481) celebrates New Year’s Eve with live entertainment including the region’s best DJs along with the Pop 2000 tour hosted by Chris Kirkpatrick of *NYSNC with performances by O-Town, Ryan Cabrera and LFO’s Brad Fischetti. Plus, confetti cannons, a balloon drop, champagne toasts, the only live ball drop in St. Louis and more! The run funs from 8 p.m. to 3 a.m. and ticket prices range from a crazy $60 to $650.

The Boom Boom Room: If spending New Year's Eve watching the best burlesque show in town strikes your fancy, head to the Boom Boom Room (500 North Fourteenth Street, 314-436-7000). In addition to the entertainment, the spot will be serving an amazing three-course dinner, plus an all-you-can-drink bar. Dance into the New Year with a confetti cannon explosion. Tickets range from $105 to $200 per person.

Brennan's Work & Leisure: For New Year's Eve, Brennan’s Work & Leisure (3015 Locust Street, 203-223-4394) and Anti-Agency invite you on a space odyssey to celebrate the new year. Once aboard the ship, from 8:30 p.m. to 1 a.m., enjoy a premium bar selection, heavy appetizers of the future by chef Josh Galliano of Companion and interstellar desserts by pastry chef Tai Davis. Groove to the night’s soundscape provided by DJ Black Guy and then step into the Zero Gravity Photo Booth to send evidence of your journey back home. All passengers must report to the orbiter near midnight for live music, a projection show and champagne toast. Attire is recommended as "modern cocktail attire/space shuttle."

Bulrush: If you haven't been to Bulrush (3307 Washington Avenue, 314-449-1208) yet, there's no time like New Year's Eve to explore chef-owner Rob Connoley's riff on Ozarkian cuisine. For the holiday, Connoley will be serving a three-course meal described as an "Ozark speed-dining experience," offering dishes such as oysters, caviar, heritage pork and pastries and confections. The luxe meal will set you back $195 per guest and includes bottomless glasses of bubbles plus a special festive cocktail.

Chaumette Vineyards & Winery: Celebrate the beginning of the next decade with a special dinner at beautiful Chaumette Vineyards & Winery (24345 State Route WW, Ste. Genevieve; 573-747-1000). From 5 to 8 p.m., guests will be treated to a champagne tasting from owner Hank Johnson and dinner from executive chef Rob Beasley. This prix-fixe menu will include one selection of a starter, soup or salad, entrée and dessert for $75 per person. Starters include crispy duck confit spring rolls and chilled Chardonel-poached shrimp followed by a second course of either salad niçoise or crab bisque. Entrée options include pork osso bucco, lobster pasta, fresh Hawaiian walu and cold-smoked prime grade filet of beef tenderloin. While reservations are required, this event is open to the public. Admission and parking are free. Families including children of all ages are welcome.

Cheer’s Bar & Grill: At Cheer’s Bar & Grill (61 Nationalway Shopping Center, Manchester; 636-222-8754), admission to the New Year's Eve party includes live music by Vintage Vibe from 8 p.m. to 1 a.m., an appetizer buffet from 8 to 10 p.m., three drink tickets (domestic and rail), a champagne toast at midnight and a gift-basket raffle. The bar asks that you please pre-order your tickets through Katt on-site on Tuesday and Friday from 6 p.m. to 1 a.m. or Thursday 10 a.m. to 5 p.m. Cash or credit accepted; no reservations. Pre-sale tickets can enter the bar on NYE at 7 p.m.

Crafted.: There's no cover or ticket price required to ring in the New Year at Crafted. (3200 Shenadoah Avenue, 314-865-3345) in Tower Grove East. Instead, party-goers can stop in for a complimentary champagne toast at midnight and fun part favors. Stick around until the ball drops, as the kitchen will remain open until midnight.

Drunken Fish: There are three locations of Drunken Fish (multiple locations including 1 Maryland Plaza, 314-367-4222) in the St. Louis area, but our favorite is in the Central West End — and where better to celebrate New Year's Eve than the lively, walkable neighborhood? For the holiday, Drunken Fish is offering a four-course dinner for just $55 per guest at all three spots, plus a premium open bar, late-night snack and sushi buffet, live music and midnight champagne toast at its Central West End and Westport locations (tickets are $85 for the latter two parties).

Elaia: Are you looking for a slightly more low-key way to ring in 2020 yet still want the luxury and opulence associated with the evening? Then head to Elaia (1634 Tower Grove Avenue, 314-932-1088) in Botanical Heights for a festive prix-fixe menu developed by chef-owner Ben Poremba. Reservations for the $125 per guest dinner are encouraged to delight in courses such as a sunchoke salad, Hokkaido scallops and white sturgeon. Complete your meal with the wine pairing (for an additional fee) along with other upgrades offered throughout the dinner.

Gateway Arch Riverboats: Ring in the new year with a view of the magnificent St. Louis skyline at this party cruise hosted by the Gateway Arch Riverboats (11 North Fourth Street, 877-982-1410). Featuring an elegant three-course dinner, open bar, DJ entertainment and a midnight champagne toast, the fun kicks off at 9 p.m. Reservations required. Must be 21 or older to participate.

Hollywood Casino: Put a little Great Gatsby in your New Year’s Eve celebration with the Roaring '20s New Year’s Eve party at Hollywood Casino (777 Casino Center Drive, Maryland Heights; 314-770-8100). Dance the night away with Dirty Muggs performing at Boogie Nights; they rock until 1:30 a.m., when a live DJ takes over to continue the celebration until 3 a.m. Plus, experience the best balloon drop in St. Louis at the stroke of midnight. Boogie Nights ticket packages include a single ticket for $30, two tickets for $50 and booth packages for up to fifteen people (includes a bottle of champagne) from $300 to $750. 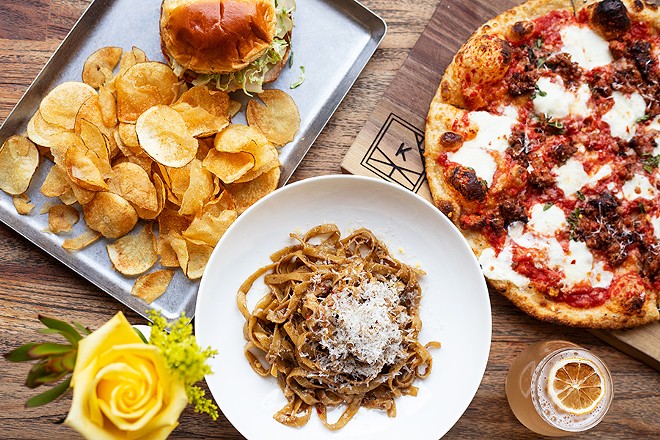 The Last Hotel: Toast the New Year in style at the luxe the Last Hotel (1501 Washington Avenue, 314-390-2500). Partake in a limited open bar (select beer, wine and spirits) for $80 per person from 10 p.m. to 2 a.m. Each ticket includes a selection of draft beer, wine and local and national spirits. All other cocktails will be served at a cash bar. Throughout the night, enjoy passed appetizers and small bites from executive chef Evy Swoboda and a dessert bar from pastry chef Suji Grant, and ring in the ball drop with a toast of bubbles. This ticket allows you access to all our bars in the lobby and rooftop. This event is 21 and over.

Lucas Park Grille: Put on your finest duds and head to downtown St. Louis for a special four-course dinner at Lucas Park Grille (1234 Washington Avenue, 314-241-7770). The luxurious meal includes a champagne toast at midnight, all for just $60 per person (and really, that's a crazy good deal). If you stick around past 11 p.m. for that toast, you'll be able to sway to the sounds of live music as well.

The Pat Connolly Tavern: The folks at The Pat Connolly Tavern (6400 Oakland Avenue, 314-647-7287) are ringing in 2020 a little differently this year. The Irish bar in Dogtown will be celebrating the holiday on Greenwich Mean Time, which means guests will be toasting at 6 p.m. instead of midnight. For $10 per person, guests can enjoy live Irish-inspired music and complimentary Guinness and Tullamore Dew when the clock strikes... 6.

Piazza Messina: For New Year's Eve, Russo's Catering is partnering with Piazza Messina (5535 State Highway North, Cottleville; 636-232-0109) for an unforgettable party. Featuring live music by The Great Escape, food and dessert stations and a full open premium bar, the event runs from  7 p.m. to 12:30 a.m. and tickets cost $85 per person.

Taste: Perhaps it's because we'll be ringing in 2020, but a lot of the New Year's Eve parties this year are themed around the roaring '20s — and the fête at Taste (4584 Laclede Avenue, 314-361-1200) in the Central West End is no exception. For $175, you can revel like Zelda and F. Scott with an open bar, bottomless glasses of champagne and boozy punch bowls perfect for sharing with a group of friends. Whatever your poision, pair it will small bites such as foie gras donuts, scallops and cocoa agnolotti from Taste executive chef Matt Wynn.

Three Sixty: As we said above, the roaring '20s are certainly being represented this New Year's Eve. At Three Sixty (1 South Broadway, 314-241-8439), that decade of decadence and debauchery will be honored with a small plate buffet, a premium open bar and live music. For $150 per guest, you can also indulge in a champagne toast at midnight and fireworks.

Tin Roof St. Louis: On December 31, it's out with the old and in with a new decade. Celebrate at Tin Roof St. Louis (1000 Clark Avenue, 314-240-5400) with live music all night starting at 6 p.m. with The Matching Shoe, followed by AM Whiskey on the main stage and DJ Arty J in the Green Room. Dinner packages, booth and table reservations are all available, as are all-inclusive bar packages. The party goes from 8 to 11 p.m. and tickets range in price from $20 to $720.

Vicia: New Year's Eve is supposed to be one of the most glamorous and luxurious nights of the year, so where better to celebrate in style than lauded St. Louis restaurant Vicia (4260 Forest Park Avenue, 314-553-9239)? From 8 p.m to 1 a.m., owners Michael and Tara Gallina are throwing a party to ring in 2020 with a fun and interactive "dine-around experience." The all-inclusive evening offers unlimited access to interactive food stations with Vicia chefs, magnums of champagne, live music, party favors and fun surprises. Featured food stations include a raw bar with shellfish and local vegetables; grilled beef and coal-roasted vegetables at the wood-fired grill; fresh baked bread, charcuterie and cheeses; and a build-your-own purple turnip-top taco bar. Champagne magnums opened throughout the night will include limited release bottles and vintage selections from some of the finest producers, plus a customizable cocktail bar and music by the Adam Maness Trio. Tickets includes all the food, champagne, cocktails and beer and wine you can consume. A cash bar will be available for a wider selection of beers, wines and spirits as well as featured non-alcoholic beverages.

Westport Social: Celebrating NYE at Westport Social (910 Westport Plaza Drive, Maryland Heights; 314-548-2876) means you can play like a kid while partying like an adult. For just a $25 cover, guests can play the full range of games at the Westport Plaza watering hole while also indulging in a balloon drop and champagne toast at midnight and dance to live music.