Now that the holiday season is almost over, New Year's resolutions are looming and Dry January is almost upon us. With that in mind, if you're resolving to reduce or eliminate alcohol consumption in 2020, the folks at WellBeing Brewing Co. have you covered.

Since 2016, the St. Louis-based brewery has produced a line of non-alcoholic beers brewed to taste like the real thing. Founder Jeff Stevens worked in marketing for breweries for years before striking out on his own and opening WellBeing with the mission to offer an N/A craft beer.

"I founded WellBeing for the simple reason that I was a person who didn’t drink alcohol and I was constantly out and in social situations where there was never really a good choice for people who don’t drink alcohol anywhere — bars, restaurants, wherever," Stevens says. "It just became obvious that this was such an underserved market."

Stevens has been sober for the past 27 years and therefore missed the craft beer revolution in the brewing industry — but that all changed with WellBeing.

"The reason I love beer is all of the social aspects of it — some of the most fun times of my life have been with this product sober or when I was drinking," Stevens says. "Just the human connection — the fun, the partying and those things that you have a beer with someone about — that’s what, to me, was always exciting about it. And the fact that we can make really great craft, non-alcoholic beer now is a real game-changer."

In the past three years, WellBeing has released four products: Heavenly Body Golden Wheat, Hellraiser Dark Amber, Intrepid Traveler Coffee Cream Stout and Victory Wheat, brewed with electrolytes. The brews have been a huge hit with consumers, now being served in more than 200 bars and restaurants in the metro area as well as in stores, restaurants and bars across the U.S.

"People are drinking less and want healthier options and they’re really looking for functional beverages," Stevens says. "I think all of those things have really helped us grow over the past couple of years." 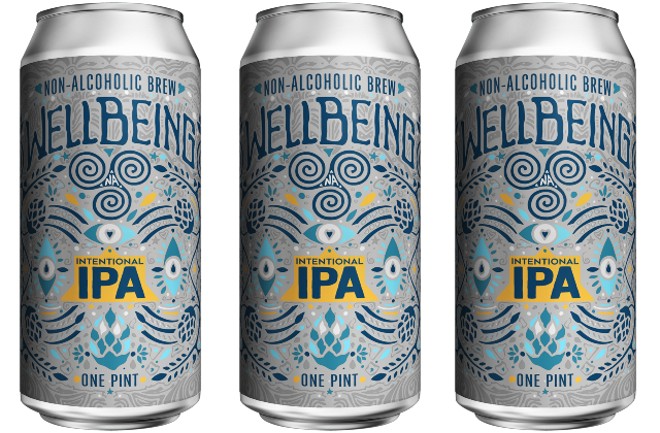 On January 2, WellBeing will launch a new beer style, just in time for Dry January, "the Super Bowl of not drinking," Stevens says with a laugh. Dubbed Intentional IPA, it's the company's first IPA. Sold in four-packs in sixteen-ounce cans, Intentional IPA was brewed using Mosaic and Citra hops for a crisp beer with notes of pineapple and peach.

"IPAs are the No. 1 craft style, I guess — there’s a huge variety of them and they sort of dominate the market for the craft connoisseur," Stevens says. "It was always a style we looked at, but we really wanted to make a great one. It’s probably taken us about eight months to really get to this beer, and we’re incredibly excited to launch it."

Shortly after Intentional IPA hits store shelves, WellBeing will be celebrating another milestone with the release of its first two CBD-infused seltzers. To start, the sparkling waters, which are infused with hemp-derived CBD, will be available in two flavors: Yuzu Bloom and Melongrass.

"Melongrass is flavored with watermelon and lemongrass, and it’s really distinctive; lemongrass has that slight bite to it and the watermelon is sweet," Stevens says. "These are a cloudy CBD drink so they look really cool. The second one is called Yuzu Bloom, and yuzu is an Asian citrus fruit with sort of an orange flavor and a floral note to it."

The CBD-infused seltzers are currently being tested at limited spots around town, including Pop's Blue Moon (5249 Pattison Avenue, 314-776-4200) on the Hill. The drinks are made in partnership with Mighty Kind, a CBD shop and dispensary selling cannabis and cannabis products to those with medical marijuana cards in Missouri. Mighty Kind is owned by Joshua Loyal (legal name Joshua Grigaitis), who runs Pop's Blue Moon with his family.

Stevens says the packaged seltzers should hit local grocery store shelves during the first quarter of 2020; to get an early taste, head to Pop's Blue Moon, Otherwise, you can find a full list of WellBeing retailers on its website.

"Restaurants are tasting [WellBeing beers] and saying, ‘This is good,'" Stevens says. "'Our customers are happy — they get a great choice. They come in and have a great experience. They weren’t drinking, and yet they wanted to come into our restaurant and enjoy a beer and everyone wins.’”