First Look: The Get Down Serves Craft Cocktails, Late-Night Eats in the Grove 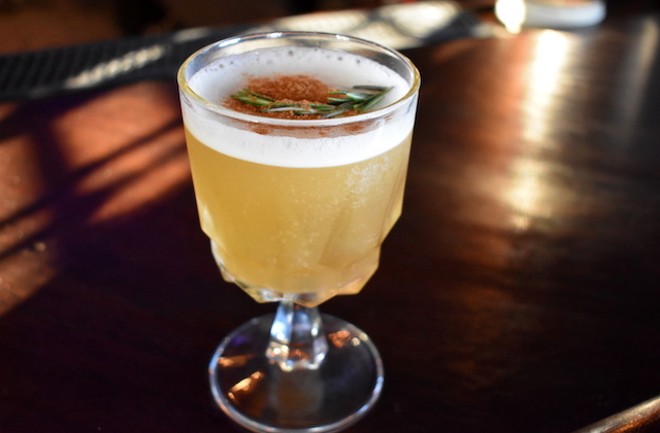 The night before Thanksgiving is famously one of the busiest evenings for bars in St. Louis, and this year, it also marked the soft opening for the city's latest watering hole and restaurant.

On Wednesday, November 27, The Get Down (1449 South Vandeventer Avenue) quietly opened in the Grove. Located south of Manchester Avenue at the intersection of South Vandeventer and South Boyle avenues, the space was previously home to America's Tavern.

Owners Eric Kopsky and brothers Joe and Tony Collins have worked in the local restaurant and bar scene for years. The three business owners first met while working at the now-shuttered Wheelhouse in Clayton and later transferred over to sister business Start Bar (1000 Spruce Street, 314-376-4453) in downtown St. Louis.

At Start Bar, Kopsky and Tony mixed drinks behind the bar — Tony helped opened the spot as bar manager — while Joe worked as the general manager. Now, at the Get Down, the business partners are divvying up responsibilities in much the same way, with Joe overseeing the opening food menu.

"We always had in mind a funky vibe and atmosphere," Joe says of the concept. "We wanted it to have a retro feel to it. I always think of the Emporium in Dazed and Confused, the neighborhood hangout spot."

The bar's name is a reference to the lyrics "there ain't no shame in the get down" from the track "Nothing to Lose" by funk band The Floozies.

"I've always loved funk," Tony says. "We always have a funky playlist going on here. We brainstormed a ton of names but this was the only one that stuck. We never got tired of it; once you know, you know." 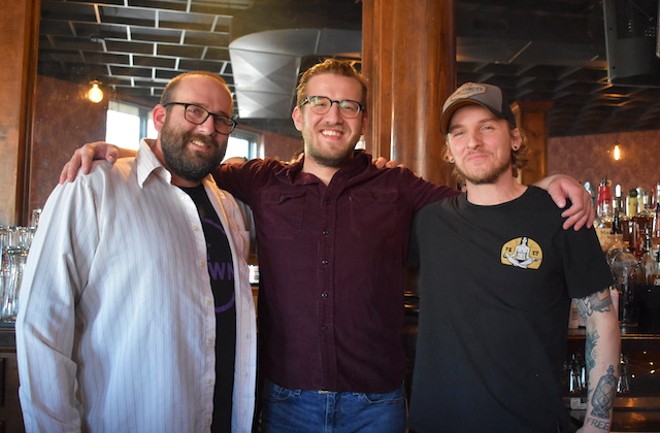 The trio signed their lease on the space in the Grove in July and quickly set to work putting their own stamp on the space. Kopsky refinished the commanding, gorgeous wood bar, tables and wood booths, while Joe and Tony painted the floor and walls and redid the ceiling with dramatic and funky lights that change colors (although the bar's signature purple and green are usually what you'll see).

The only interior work that was commissioned was the salmon-hued damask wallpaper that adds a touch of whimsy to the space. Tony even learned how to do electrical work to make changes to the bar's electrical system.

"It feels good to do everything yourself," Kopsky says. "When it was happening, though, every single bone in my body hurt, but we learned a lot."

In the kitchen, Joe has prepared a selection of tasty, fun and made-from-scratch snacks, sandwiches and wraps inspired by recipes from his and Tony's mom, Marynel Collins.

"For our house red sauce, she pretty much came in the first day we opened and made it with me that day — 'Mom, good news: You're working a double today," Joe says with a laugh. "It was fun, though, and she loved it. I'd made it before, but I wanted her to be there with me that first time here. Same with making the meatballs, too."

"I'm finalizing the menu as we speak," Joe says. "It's going to be a short, nine-to-eleven-item menu of awesome things. Once I get that, I'm going to hire a cook to come in and execute what needs to be done."

Snacks and sammies aren't your only food options here, though. Keep warm this winter with one of Joe's favorite menu items, Jojo's Meatball Soup, with chicken, celery, carrots and meatballs served over a bed of farfalle pasta with Parmesan cheese.

"I basically stole a lot of stuff from my home," Joe laughs. "So they're home-style recipes that I've tweaked over the past ten years. I like to cook, so I took my core group of staples from back at home and brought them into the bar, and they're going over very well. I'm trying to make it a point to have the best meatball sub in town."

Small plates range from garlic cheese bread and jerked chicken skewers to the Krabby Crab Puffs with cheese spread, fresh crab and a horseradish cheese on an English muffin.

"We wanted to make everything from scratch — from-scratch bar and from-scratch kitchen," Joe says. "With the smaller menu, the items come out pretty quick, and that was important to us, too: speed, efficiency and stuff that tastes awesome. I didn't want a menu with 30 different things, and if it's all good, it should be a win-win."

The kitchen also stays open late — until 1 a.m., just like the bar — which means folks now have a new destination in the neighborhood for late-night eats.

The cocktail list features a few updated classics as well as some unique house offerings. Riffs on standards include the cinnamon-maple Old Fashioned with bourbon, cinnamon-maple syrup and bitters, and the Beez Kneez, with tequila, amaretto, housemade sour mix and honey simple syrup. Kopsky juices fresh fruit and makes all of the bar's syrups in house for his drinks.

"Cocktail-wise, my favorite is the Old Fashioned," Kopsky says. "I took maple syrup and cinnamon sticks and boiled them down to make a cinnamon-maple syrup, and it's a good wintry drink with whiskey, cinnamon, maple, just a little bit of bitters and then I express an orange peel over it so it's nice and balanced. It's a good cocktail for winter weather."

Other cocktails, though, reveal more of the bar's personality. Try the Manolin, for example, with rum, luxardo, lime, house simple syrup and rhubarb bitters, or the Sunset Overdrive, with vodka, Aperol, strawberry, lemon and orange bitters. Stop in during happy hour on weekdays from 4 to 7 p.m. for half-price draft beer, select cocktails and small plates.

"The list touches all the major spirits, but I didn't want to make it too pretentious," Kopsky says. "Most of the cocktails are going to change with the seasons; I can't wait to get into spring and summer because gin and vodka drinks with fresh mint, strawberries, raspberries — that's my forte. Before we opened the bar I did more reading than I've ever done in my life — cocktail books, liquor books, books on bitters — to absorb that knowledge and put it to work."

"It's all fresh, made to order and meticulously crafted," Tony continues. "The menu we have now is a very good, solid core of cocktails, and there's something for everyone. We have a couple of gin cocktails, a couple of whiskey cocktails, vodka, one tequila."

So far, Kopsky says that customers are loving the range of cocktails on offer as well as the attention to care and quality.

"Watching people drink the drinks that we make and say, 'That's damn good,' — it's exciting when somebody likes it," Kopsky says. "I enjoy [the work] and I'm passionate about it."

Behind the bar customers will also find a nice selection of local craft beers on draft, including those from Schlafly Beer, 4 Hands Brewing Co., Civil Life Brewing Co. and Urban Chestnut Brewing Co. Canned brews from Logboat Brewing Co. in Columbia, Missouri, are also on offer, as are options from craft breweries across the country.

"As far as the bar goes, we have a good selection of draft beer and a lot of bottles and cans — just a few from every family or style of beer," Kopsky says.

In addition to a full bar and eats, the Get Down has a range of games to entertain customers. More focused on traditional bar games and board games than arcade or video games, the bar features a foosball table and bubble hockey as well as board games such as Guess Who? and Rock'em Sock'em Robots. Eventually, the owners say, they'd like to expand into the vacant space next door to offer a full-on game room.

"Because of the whole neighborhood bar vibe, we were originally going to have pool tables and darts, but when we found this location, we didn't really have the space for that, so we had to tone it down a little bit," Joe says. "So we brought in the games we could, and it's very intimate and cozy."

The partners hope to eventually expand the bar seating and lounge area into the building next door to add those pool tables, dart boards and other games.

"We want to knock out a portion of one wall and then put classic bar games in there — pool tables, shuffleboard," Tony says. "That was our vision from the get-go. We eventually want to have space for a party room as well."

The building also features a sizable back patio with a small stage, so come spring, guests can expect to see live music — funk, no doubt — while they sip Kopsky's signature warm-weather cocktails.

"We're keeping a lot of plants alive in the apartment [attached] next door so that we can plant them on the back patio this spring," Kopsky says. "I water them every day and am keeping them alive so we can have a rainforest on the patio next year."

For now, though, the partners are just excited to be open and serving St. Louis quality eats and drinks in the Grove.

"I think the people who have come in ... we've had a lot of people from the neighborhood come in multiple times, including a guy who used to work here when it was America's Tavern, and he was raving about how good and much better it looks," Joe says. "I don't think we've come across a complaint yet, which, knock on wood ... but that feels good, too. Everybody is liking what we're throwing down." 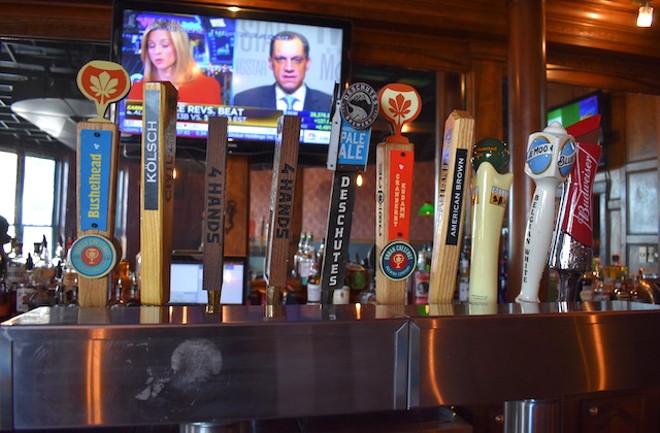