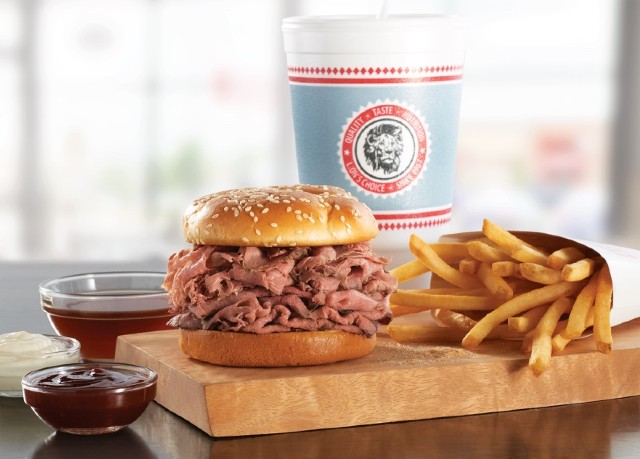 Earlier this year, the Riverfront Times named Lion's Choice the best fast food in St. Louis — and soon, we may have to add "best frozen pizza" to the locally owned chain's list of accolades.

We couldn't be more excited for this collab, as it brings together our favorite fast-food destination and one of our favorite local craft breweries — plus, did we mention the French fry crust?

If that's not the definition of Christmas coming early, this is: On Sunday, December 22, from noon to 3 p.m., you can get a taste of the new pizza at a special tasting event at 4 Hands Brewing Co. (1220 South Eighth Street, 314-436-1559) in Lasalle Park. In addition to samples of the specialty pie, guests can expect to see the Lion's Choice food truck and local wares from Arch Apparel, including the brand's collaboration with 4 Hands. Beer specials and giveaways — including seasonal Lion's Choice glassware — will also be available for the duration of the event.

If you can't make it on Sunday, though, no worries: Fans won't have to wait long to buy the frozen pizza in area grocery stores, as it's set to debut in freezer cases by mid-January. A press release doesn't list which local grocery stores will carry the pizza, but if past 4 Hands-Mama Lucia's pizzas are any indication, most area Schnucks and Dierbergs Markets stores will likely stock it.

“We share a deep love and connection to the St. Louis community with Lion’s Choice, so this collaboration is so exciting," says 4 Hands owner and founder Kevin Lemp in a recent release. "We wanted this line of frozen pizzas to showcase St. Louis and partnering with Lion’s Choice just really brings that home. I grew up riding my bike to Lion’s Choice! Both Lion’s Choice and Mama Lucia’s evoke a sense of nostalgia for me, and I think that will resonate with others who grew up in St. Louis.”

This isn't the first pizza partnership for 4 Hands: In August, the brewery unveiled its first collaboration pies with Mama Lucia's, including local partnerships with Mission Taco Joint, Sugarfire Smoke House and Red Hot Riplets. Now, with its Lion's Choice pie, the line of frozen pizzas is an even stronger representation of the eats St. Louisans love.

“We wanted to incorporate all the elements that people love about Lion’s Choice, from the roast beef to the horseradish sauce and seasoning, but we couldn’t leave out the fries!" Mama Lucia’s president and managing partner Scott Ashby said in the release. "We developed a way to incorporate small bits of fries into the pizza crust dough so it’s really a unique frozen pizza experience.”

Like the other pizzas in the line, the Lion's Choice pie suggests pairing slices with a 4 Hands brew — specifically, the roast beef topping is said to pair well with 4 Hands' City Wide, an American pale ale.

“We are so thrilled to partner with 4 Hands Brewing Co. and Mama Lucia’s on this pizza," said Michael Kupstas, president and CEO of Lion’s Choice in the release. "Especially this time of year, we see a lot of guests from all over the country return home for the holidays and clamor for a taste of home. What better way to spend time with the family than a mash-up of all your favorite St. Louis brands? We’re also excited to see Lion’s Choice in area grocery stores with this fun collaboration.”