For Scott Ellinger of the Brass Rail, It’s Key to Play Along with Your Guests 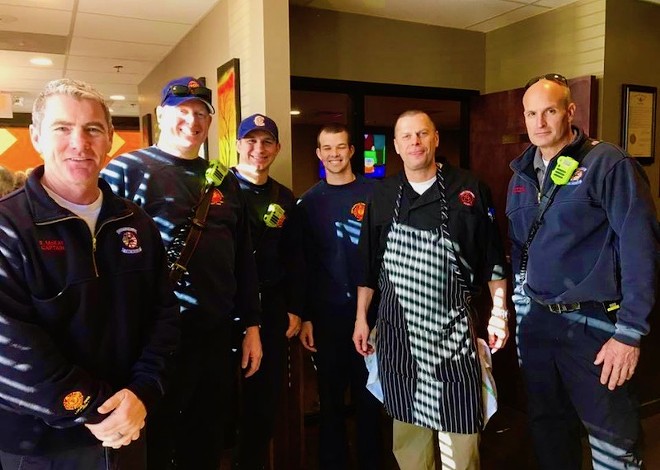 Scott Ellinger got into the restaurant business at the age of fifteen, washing dishes at a family restaurant in his native Ohio. He didn’t know it at the time, but the kitchen’s design — and his quiet curiosity — would set him on a path to a career in the business.

“I was a dishwasher minding my own business, but the way the kitchen was set up, I would watch the woman making desserts,” Ellinger explains. “One day, after about a year, the owner asked me if I knew how to make any of the desserts because the woman left. I told him I knew how to make all of them. That day, I became their baker.”

Now a restaurant industry veteran and chef-owner of the Brass Rail Steakhouse (4601 Highway K, O’Fallon; 636-329-1349), Ellinger understands that the reason he paid such close attention to his coworker was because something about the kitchen spoke to him. Though it was a calling he couldn’t deny, he was too busy with other plans to realize it. A high school graduate with dreams of becoming a surgeon, Ellinger left Ohio for the University of Wisconsin with his sights set on medical school.

After two years of study, however, he realized he was on the wrong path and decided to return home to Ohio. There, he got a job working for Buffalo Wild Wings when it was still a young company with only six restaurants. As soon as he turned 21 and was old enough to buy alcohol for the restaurant, the owners made him a general manager. After six months, he was helping them open franchises.

“They sold their first franchise in Cleveland, and asked me to open it for them,” Ellinger recalls. “I had no idea what I was doing, but I figured it out and ended up opening 90 restaurants for them.”

Ellinger worked for Buffalo Wild Wings for several years, earning his stripes as a manager, restaurateur and industry pro. He left the organization to work for the J. Alexander’s chain, but returned to Buffalo Wild Wings after a few years, this time as a franchise owner.

While running his franchise, Ellinger took night classes, earning a degree in business in the hopes of one day opening his own restaurant. In fact, for one of his projects, he got a jump start on the dream he would realize some sixteen years later at the Brass Rail.

“I wrote the first version of this business plan sixteen years ago for one of my classes,” Ellinger says. “This is so close to what I imagined.”

However, it would be more than a decade and a half before those plans would see the light of day. Instead, after selling his Buffalo Wild Wings franchise, Ellinger worked for Dave and Buster’s in Cincinnati before leaving the company to move to St. Louis. Here, he got on with Romano’s Macaroni Grill, helped open Pujols 5 Westport Grill in Westport Plaza and eventually got a gig commuting for a restaurant group out of Baltimore.

Perhaps it was the commute that wore him down, or the fact that he’d spent his entire life working for others, but something in him had enough of the track he’d been on all these years. He knew he needed a change.

“To be honest, I was so sick of working for other people who I felt like I was better at doing the job than them,” Ellinger explains. “I reached the point where I was like, 'If I can just do my own thing, make my own food and be left alone, that’s all I want.'”

Ellinger would get his chance to do just that in 2012, when a friend told him about an old bar that was for sale in O’Fallon, Missouri. A corner bar outfitted with taxidermy deer heads and stuffed fish, it was nothing like he’d envisioned his dream restaurant to be. However, it was basically turnkey, and he was desperate enough for a change that he signed a lease, knowing that he could gradually change the concept to reflect his style.

Ellinger realized he had tapped into something within just a few months of the Brass Rail’s February 2012 opening. By May, the restaurant was regularly packed. By July, there was at least an hour-long wait for a table every Friday and Saturday night. By the following year, the wait time increased to three hours.

“There are a couple of chains out here, but as far as independent restaurants, there’s nothing around here,” Ellinger explains. “You pretty much have to cross the bridge over the Missouri River to get that. It’s funny, because the area is all neighborhoods filled with parents of grown children or empty-nesters with disposable income who can come out for date nights.”

Over the past few years, Ellinger has enjoyed great success with the Brass Rail and sees his restaurant as an integral part of the community. Whether that means serving as a gathering place for local social groups or serving up 10,000 Thanksgiving dinners to area families, Ellinger understands the importance of having an impact outside of the steakhouse’s four walls. And now that he gets to do things on his own terms, he feels that for the first time in his career he finally has the freedom to do that.

“This is the first chance I’ve really had a green light to do whatever I want,” Ellinger says. “I’ve been able to do little things here and there, like come up with recipes, but this is the first time I’ve gotten to say the decision is mine. It’s either right or wrong or going to work based on what I say. I think all of us in this business want to do this, and now I have the chance.”

Ellinger recently took a break from the Brass Rail to share his thoughts on the local restaurant scene, his passion for Peanut M&Ms and why, in the restaurant business, it’s important to always play along with your guest.

What is one thing people don’t know about you that you wish they did?
I went to college to become a surgeon, and while working my way through, fell in love with the restaurant business.

What daily ritual is non-negotiable for you?
Walking my dog, Buckley.

If you could have any superpower, what would it be?
Time travel. I’d like to be able to talk to people from history and the future.

What is the most positive thing in food, wine or cocktails that you’ve noticed in St. Louis over the past year?
The level of respect some of these local chefs and distillers are getting. St. Louis is gaining some actual buzz.

What is something missing in the local food, wine or cocktail scene that you’d like to see?
A second Brass Rail, of course.

Who is your St. Louis food crush?
I don’t even know what this means.

Who’s the one person to watch right now in the St. Louis dining scene?
I have no idea. Sadly I’m pretty consumed in my own world and don’t venture out much.

Which ingredient is most representative of your personality?
Beef: versatile, reliable and can be the star or the starter.

If you weren’t working in the restaurant business, what would you be doing?
I’d probably be a doctor.

Name an ingredient never allowed in your restaurant.
I’d like to outlaw coconut and black olives, but people like them, so I play along. If a guest wants it, I’ll cook with it.

What is your after-work hangout?
A long walk, a hot shower and relaxing at home with my daughter. What’s your food or beverage guilty pleasure? Peanut M&Ms, Donatos Pizza and California cabernet.

What would be your last meal on Earth?
Penner-Ash pinot noir, the lobster roll at Oishi [Sushi and Steakhouse] and the dumplings at Joe’s Shanghai in New York City’s Chinatown.