Remembering Schneithorst's History and Legacy Ahead of its December 24 Closure 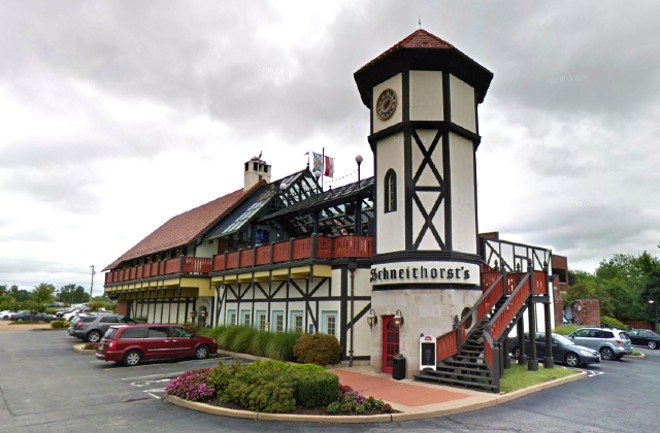 It's been a rough few weeks for legacy St. Louis bars and restaurants. Earlier this month, the Riverfront Times reported on two significant closings — Culpeppers, which had operated in the Central West End since 1935, and Brennan's, which is planning to relocate — prompted by Saint Louis Chess expansion plans.

The news came just days after it was announced that Ladue dining institution
Schneithorst's Restaurant & Bar (1600 South Lindbergh Boulevard, Ladue; 314-993-4100), would shutter after service on December 24 to make way for new office and retail space, as first reported by the St. Louis Business Journal.

In an interview with the St. Louis Post-Dispatch, owner Jim Schneithorst Jr., grandson of founder Arthur "Bud" Schneithorst Jr., said that he “knew this day would come,” and that, of course, “there’s just no good time for something like this.” Schneithorst, who owns the property at the intersection of South Lindbergh Boulevard and Clayton Road, will be overseeing its redevelopment.

Like Culpeppers, there's a younger generation of St. Louis diners who could never know the impact and popularity of Schneithorst's in its heyday.

Opened in 1956 by Bud Schneithorst, the German-themed restaurant was the latest from a family of St. Louis restaurateurs; Arthur's father, Arthur Schneithorst Sr., ran the historic Bevo Mill restaurant from 1939 until his death in 1947, when Bud and his mother, Bertha, took over. Before revitalizing the Bevo Mill, Arthur Sr. operated Benish’s Restaurant at Eighth and Olive downtown, first opening in 1917 and closing during the Depression in the early 1930s. Arthur Sr. also opened Rock Grill at 204 North Eighth Street in 1934.

By 1956, the Schneithorst family had invested some $50,000 into the iconic Bevo Mill at Gravois and Morganford avenues before reopening it; it was perviously operated by August A. Busch, the son of Anheuser-Busch co-founder Adolphus Busch. Renovations included adding a cocktail lounge called the Yacht Club and installing air conditioning.

"Many of the original decorations of the building have been restored, such as the two Old World scenes done in the tile just inside the main entrance, and the many hand-carved gnomes supporting the arches, which were purchased at the Paris Exposition by Busch in 1898," the Post-Dispatch reported in 1939.

By 1946, Arthur Sr. reported that his restaurant was serving some 2,500 pounds of seafood a week, including house specialties such as crawfish soup and herring salad.

When Schneithorst's first opened in Ladue in the mid-1950s, the menu featured some German-style fare such as weinerschnitzel and sauerbraten but also the kind of trendy upscale dishes that were in fashion at the time. Service wasn't necessarily speedy — and that was the point. In a Post-Dispatch story from May 1956 titled "If You Like Leisurely Dining, Schneithorst's Is the Place to Eat," reporter Bob Goddard says that the restaurant is not targeting "'grab and gobble' eaters."

"Bud's a firm believer in gracious, leisurely dining, and that's the tempo of things at his restaurant," Goddard writes. "Among the Schneithorst specialties: Lobster Savannaugh, tender cubes of Maine lobster sautéed in butter with fresh button mushrooms and diced green peppers in Newburg sauce, topped with Parmesan cheese and fresh bread crumbs then baked to a golden brown in the half shells and topped with sherry wine. Sounds good. It is!"

Schneithorst's West, as it was known at the time, was often couched as a destination for luxurious dining. (The restaurant was also called Schneithorst's Hofamberg Inn for a time.) In a 1963 story, the Post-Dispatch described the restaurant's Pigskin Room as offering, "service and food are par excellence in a setting that allows you the restful pleasure of dining in quiet comfort and pleasant company."

The restaurant wasn't Bud's first, though; having grown up in the family business in Bevo, Bud dropped out of law school to open the first iteration of Schneithorst's as a concession stand at St. Louis Lambert International Airport in 1939. Eats were casual, including Bud's famous fried chicken "in the rough" with shoestring fries and hot buttered rolls. "Then we lost the contract [thank goodness], because our bid was too low," Bud told the Post-Dispatch in 1990.

By the early 1960s, the family had opened a string of restaurants across the St. Louis area, including Schneithorst's in Ladue, Big Bevo Drive-In on Hampton Avenue and eateries inside three Holiday Inns, including one in Edwardsville, Illinois. (Eventually Bud would run restaurants in seven area Holiday Inns.)

Not all of the press was glowing, though: In 1972, the year he joined the Post-Dispatch, the late, great restaurant critic Joe Pollack filed a mostly negative review of Schneithorst's. Titled "Service, Ja, But The Food, Nein," the review took particular aim at the venerable restaurant's sirloin strip steak.

"The steak tasted as if the steer had been sprinkled with tenderizer every day of his life and had, therefore, softened to death instead of being slaughtered in the normal manner," Pollack wrote. "It was properly done, but on the grainy side, slightly mushy and with so little flavor that the temptation was strong to reach for some sort of steak sauce. The shrimp also lacked flavor, both in the shellfish itself and in the batter. A couple of onion rings, atop the steak, were the same."

When Pollack returned in 1975, however, he found the food and experience much improved.

"A German name and German headings on the menu are about as far toward the Rhine as things go at Schneithorst's Hofamberg Inn," Pollack wrote. "The old English type style may add a European touch, but the selection is primarily American at the long-standing restaurant. ... A couple of recent visits generally were pleasant, with three main courses out of four turning out very well and the evenings having an enjoyable feeling."

Schneithorst's is also credited as "one of the first St. Louis restaurants to start the brunch tradition," in a Post-Dispatch story from 1980.

The past three decades, however, have seen a lot of change for Schneithorst's. In 2002, current owner Jim Schneithorst Jr. significantly downsized the restaurant from its former massive 40,000-square-foot space, citing rising competition in the local restaurant industry. In 2005, when The Village at Schneithorst's shopping center signed its final tenant, about 80 percent of the original footprint was gone, including the Hofamberg Inn, and replaced with retail and office space, according to the Post-Dispatch. Fourteen years later, the restaurant that gave the shopping center its name will soon cease operations.

It's inevitable that longtime restaurants like Schneithorst's and Culpeppers will close; that is the nature of the business, and both have endured far longer than most, feeding generations of St. Louisans and creating memories that will linger long after their last service. If you haven't visited Schneithorst's recently or ever, though, it's worth your time to stop in and say goodbye, as these kinds of pieces of St. Louis history have contributed to the thriving dining scene we all enjoy today.

Schneithorst's will host its final service on Tuesday, December 24 ending at 3 p.m. due to the Christmas Eve holiday.