One of St. Louis' most storied restaurants has reopened — and with updated digs and new menu items, it's poised to enter its next chapter in style.

Located inside the Chase Park Plaza Royal Sonesta St. Louis, the Tenderloin Room (232 Kingshighway Boulevard, 314-361-0900) celebrated its soft opening on Saturday, December 7, and will officially open to the public on Monday, December 16.

Last month, Brazell told the Riverfront Times that the Karagiannis family approached him and his business partners more than a year ago and that the interim period allowed Brazell and partners the time to take a hard look at the restaurant and make thoughtful updates. The Tenderloin Room temporarily closed on November 4 for light renovations and menu changes.

"We took a lot of time to get to know each other — they've owned the restaurant for like 30 years, so it's that family's life," Brazell told the RFT. "We worked out a good deal for them; we kept on Dino and his two daughters, Eleni and Mary, and the whole staff as well. There are so many people who live inside the Chase, and [the Tenderloin Room] is like their living room; they know the family so well and we didn't want a big change."

The steakhouse has been a local staple since 1922, and the interior updates that Brazell and team have made respect that tradition. Longtime customers of the venerable restaurant will be happy to see that the dark woodwork, stained glass ceiling over the bar and the general vibe of the space have remained the the same. Changes in the dining room include luxe new carpeting, stunning pieces of artwork by local chef and artist Tyler "Tai" Davis, comfy yet stylish chairs and beautiful mosaic jade tiles affixed to the fireplace. St. Louis architecture and interiors firm V Three Studios oversaw the updates, including the carpeting, furniture, light fixtures and more.

As for the historic stained glass that illuminates the bar, each panel has been professionally cleaned for extra sparkle. Behind the bar, new sleek mid-century panels add extra glow and ambiance to the space.

"We're keeping it classic but just elevating it," Brazell told RFT in a phone call today. "The Karagiannis family built an amazing thing, but now I want to put my stamp on it; my name is on this thing and this is kind of the highlight of my career so far. We're going all out and putting a lot of effort into giving people more options."

The dining room isn't the only area to see updates, though. The kitchen now features a dry-aging chamber to age steaks and whole primal cuts in-house. And then there's the brand new custom grill built by local artisan Jonas Janek of Henley Forge in Alton, Illinois, which features a rotisserie, grill plates that can be moved around on the rig and hooks for hanging meat and sausages.

Brazell, who came up in the local restaurant scene working in fine-dining kitchens like the late, great Monarch, says he's most excited to get back into that style of cooking. Working alongside Brazell in the kitchen is Shelby Johnson, executive chef at the Tenderloin Room, and chef Kevin Ruck.

"We have an amazing staff," Brazell says. "Shelby is the chef here, and she's been absolutely incredible. As an owner and a chef, of course I'm here to coach her and I wrote the menu, it's my food, but she's doing an amazing job. And Kevin came on board about two weeks ago and he's been a great addition. They're doing a great job."

The updated menu certainly gives Brazell, Johnson and team plenty of opportunity to test the limits of the grill. To start, seven shareable plates are offered, including standouts such as the bacon-wrapped tenderloin tips with house steak sauce and the pan-seared scallops with crispy fingerling potatoes, sour cream, roasted walnut sauce and chives. We're especially excited about the shrimp cocktail, a house classic, and the twice-baked seafood dip, which folds lump crab into a blend of shallots, leeks, roasted Peppadew, celery, smoked gouda, sharp Cheddar and gruyère with toast points.

The focus of the menu, however, is obviously the cuts and chops, and if that's what you're ordering, come prepared with a big appetite. Brazell is sourcing high-quality beef for the Tenderloin Room — including Japanese A5 Wagyu — and serving them in hefty cuts. Choose from the Pepperloin a la Tenderloin, cowboy ribeye, filet mignon or a New York strip and pair some surf with your turf with a lobster tail, two jumbo seared scallops or a topping of crab Oscar.

Steaks can be ordered with one of four sauces: brandy-peppercorn-cream, Béarnaise, mushroom-Burgundy and the Famous House Steak Sauce (the former three cost extra, but not the house option). The Tenderloin Room takes just as much care with its Crowns & Butters meant for topping steaks, including a bacon-bourbon-leek ragu, herb and pea pistou, house steak butter and lemongrass-black garlic butter.

"We kept using the analogy of 'choose your own adventure' with the different butters and sauces," Brazell says. "You could have the same cut three different nights in a week, but one night gets the bacon-bourbon-leek ragu, the next night gets the black garlic-lemongrass butter, and then the third night gets the sweet pea pistou."

A thick-cut pork chop and deboned half roasted chicken round out the entree selection, plus rotating seafood dishes that will be treated more like specials. From the beef to the pork to the fish and seafood, Brazell and team are sourcing as much local and sustainable product as possible.

"The pork is really cool; we're using heritage breed Berkshires from Vito Racanelli's Brewers Crafted Pork that are fed spent grain from local breweries, which is really cool," Brazell says. "As far as seafood dishes, we didn't want to put any boundaries on ourselves, so the menu literally says to ask your server about our current selection. We're working with Fortune Fish Company and we fly in the freshest best thing that they have every two days."

Whatever your main course, don't miss standout sides such as the crispy fingerling potatoes with chimichurri, roasted Ozark Forest wild mushrooms, broccolini with crispy garlic and Parmesan or the Famous Twice Baked Potatoes.

For dessert, the revamped Tenderloin Room offers three sweet treats: cheesecake, Black Forest cake and gooey butter cake. Of particular note is the Tahitian vanilla cheesecake with white chocolate, Graham cracker and a seasonal compote. "We wanted to keep the classics, so we still do table-side flambé for the cherries jubilee and bananas Foster served over Tahitian vanilla ice cream from Serendipity," Brazell says.

Brazell and his team have also expanded the countertop or kitchen pass surrounding the open kitchen to offer a chef's table for up to six guests. Diners can pay ahead and then park themselves at the pass for specially designed five- or six-course dinners. 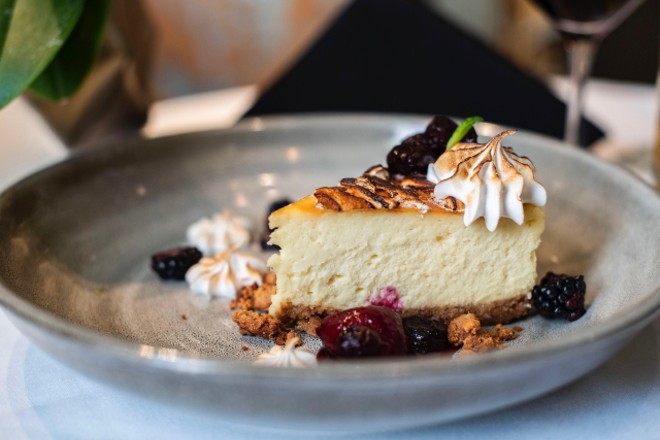 If you're stopping in for a more casual bite to eat, the brand-new bar menu offers plenty of tempting options. Many of the starters offered on the dinner menu are featured here, including the scallops with potatoes, plus a house burger with two seared and grilled smashed patties, American and gruyère cheeses, au jus onions pulled from the French onion soup made in-house, shredded iceberg lettuce, house bacon and an aioli mixed with housemade steak sauce.

"There's never been a bar menu before, and now guests can have that bar menu there or in the dining room," Brazell says. "That's where we can have a little more fun. We're doing some super classic things like escargot and bone marrow and keeping it super simple but executing it perfectly every time. And that burger is fire."

Behind the bar, new cocktails include the Rat Pack — after all, some of its original members have dined at the steakhouse — and the Irish Crush. The Rat Pack mixes up Old Overholt rye, Luxardo amaro, Angostura Bitters and a splash of Laphroaig, while the Irish Crush combines Irish whisky, lemon, demerara syrup and blueberry purée.

Interior changes are similarly subtle and in the spirit of the St. Louis dining institution. Local woodworker David Stine has crafted a new bar-top and large dining-room table for the revamped restaurant. Some of the interior touches were inspired by the venerable steakhouse's past, while others, like a new jade fireplace surround, realize Brazell's own ideas for the space.

Ahead of the grand opening on December 16, Brazell says he's excited to reintroduce the Tenderloin Room to both longtime customers and new faces. By respecting the restaurant's history and where it's been while making thoughtful updates to usher in a new chapter, Brazell hopes that diners of all stripes will be happy with the refreshed experience.

"It's unbelievable, it really is," Brazell says. "It's finally setting in that we just pulled this off. We're at that point where we've done the work and now we get to show it to the public. I'm excited." 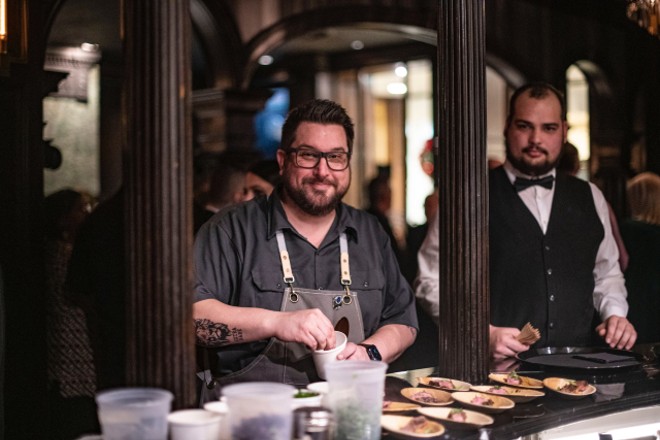