Sobriety and Leaving the Kitchen Made Aaron Teitelbaum a Better Restaurateur 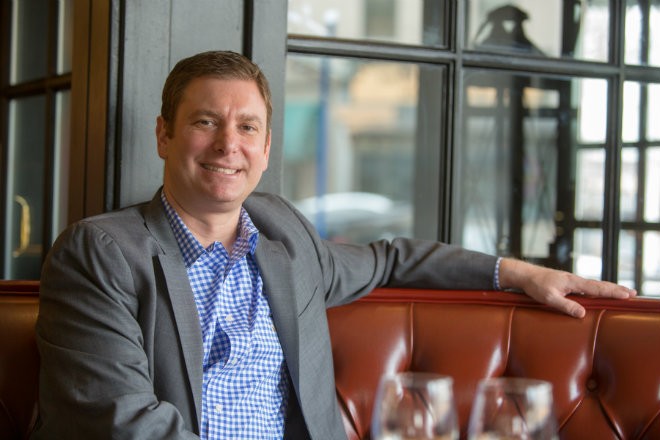 Aaron Tietelbaum vividly remembers the moment he walked into the dining room of the restaurant that would be his big break in the business.

A self-described naïve kid from the Midwest, he had just graduated from the Culinary Institute of America in Hyde Park and wanted to learn all about the front-of-the-house somewhere in New York City. On this particular day, he decided to apply for a job at a stunning restaurant — one that was so beautiful it looked like an opulent hotel. He sat down with the operations manager, touted his credentials and sold himself for the job as if he owned the place. It took a while to register that he was sitting in the middle of one of the city’s most lauded establishments, Daniel.

“I didn’t know anything about it,” Teitelbaum laughs. “I was big enough in my world in St. Louis that I knew I was going to do a good job, but I didn’t know what I was getting into there. They ended up hiring me as an assistant general manager — a new position — but they had to sneak me in under the chef’s nose because I wasn’t French, and they wanted me to prove why this non-French guy was running the show in his house. For the first month, they hid me from him, which was so bizarre because he lived above the restaurant.”


Now a seasoned restaurateur who considers chef Daniel Boulud a trusted mentor and dear friend, Teitelbaum has more than proven his worth in the industry, most notably as owner of the St. Louis institution Herbie’s (8100 Maryland Avenue, Clayton; 314-769-9595). However, in his mind, it wasn’t all that long ago that he was a high school kid who got into the business because he needed a job for spending money.


That job — with Mark Erker at Catering St. Louis — would prove to be fateful for Teitelbaum. Almost instantly, he realized he loved serving people, a passion that would propel him into a management position with the company by the time he was nineteen years old.


“[Erker] was my first mentor, and he taught me about business, serving people and doing what you do with care,” Teitelbaum explains. “He instilled in me how important it is to be your best. That’s an important thing for me, sometimes to a fault.”


Teitelbaum worked for Catering St. Louis for eight years before leaving the company to go to college. Once there, however, he realized that school wasn’t his thing, and he ended up goofing around more than going to class. After a year of floundering, he decided to return to St. Louis and again work for Erker.

This time, though, he made an important mental shift: The job was no longer just a way to make money; it was what he wanted to do for a career.

After three years, Erker encouraged Teitelbaum to take the next step in his career and apply to culinary school. He was admitted to the Culinary Institute of America in Hyde Park, where he fell in love with cooking both inside the classroom and during his externships, in particular a stint at Bobby Flay’s Mesa Grill.


As much as he loved cooking, Teitelbaum understood that his experience in management and leadership at Catering St. Louis put him in a unique position to be a bridge between the front and back-of-the-house. He made the decision to focus on the management side of the business and gained tremendous experience in that role working for chef Boulud. The two grew close, and he learned not only the operations and cooking sides of the business, but also how important it is for a restaurant owner to be a part of the community.

He’d see Boulud’s philosophy in action in the days that followed 9/11. For two weeks, Teitelbaum worked by Boulud’s side at ground zero, leading a circle of workers who’d come down to feed the first responders. It made a tremendous impact on him, both professionally and personally.


“After 9/11, New York changed,” Teitelbaum says. “I decided it was time to move on and move back to St. Louis to open a restaurant.”


Teitelbaum returned to town with the goal of opening a restaurant unlike one that St. Louis had ever before seen. That restaurant, the now-shuttered Monarch in Maplewood, would go on to become one of the city’s definitive dining establishments and bring Teltelbaum great success and notoriety. Professionally, he was on top of the world, but he admits he was not at his personal best. Instead, that time period was defined by ego and represented a point in his life when he wasn’t particularly healthy.


That changed when, about halfway through his tenure at Monarch, Teitelbaum got sober. With that major life change came a desire to return to the kitchen. In 2008, he bought local dining institution Balaban’s out of bankruptcy and reopened the iconic Central West End restaurant as its new chef-owner.


“I was energized and excited and decided it was time to do my own thing,” Teitelbaum says. “I love being in the kitchen and leading a team. For me, being a chef is all about balance — knowing how to run a business and cook.”


Teitelbaum worked as Herbie’s executive chef until he moved the restaurant to Clayton in 2016. Although he loved cooking, he understood that running the restaurant’s operations regularly took him out of the kitchen. He felt it wasn’t fair for him to get all of the credit when others were doing the day-to-day kitchen grind. This realization made him rethink his role as that of a mentor — that it was time for him to do for others what Erker and Boulud had done for him.


Teitelbaum’s move out of the executive chef role has also helped him to balance the demands of work and family, a change in perspective that has helped him in all aspects of his life.


“I realized that I am good at running a kitchen and executing, but the day to day of a restaurant is not what I want to do anymore,” Teitelbaum explains. “I had to figure that balance out — how I am going to own different restaurants and make that work but be home by 6 p.m. to be with my family. For my family, for my recovery and for the businesses, those all had to work well together. I’ve finally found that — and it’s changed my place in the restaurant — but it’s been amazing."


Today, Teitelbaum operates two locations of Kingside Diner (in Clayton and the Central West End) in addition to Herbie's. He recently took a break from the kitchen to share his thoughts about the St. Louis restaurant scene, his passion for coaching and leading a team and why he’s finally given up on his cilantro ban.

What is one thing people don’t know about you that you wish they did?

My life has been a pretty open book in my world, and I don’t hide much of anything. My team knows me well because I am open and honest. I guess the one thing that people may or may not know is that I am in recovery and love that it is prevalent in my business today. I get to run my businesses in a way that mirrors my life today. It is my biggest achievement in business.


What daily ritual is non-negotiable for you?

Morning meditation. It sets me out on the right foot each day.


What is the most positive thing in food, wine or cocktails that you’ve noticed in St. Louis over the past year?

Camaraderie and collaboration among chefs and restaurateurs. It is something I saw a great deal while working in New York City, and I’ve found it to be an important part of what makes our business great.


Who is your St. Louis food crush?

Jimmy Fiala and Matt McGuire. I believe they both have stayed true to great food and service while also running a solid business. It is what makes a great chef and restaurateur. Balancing all three of these areas is the hardest part of our business.


Who’s the one person to watch right now in the St. Louis dining scene?

This is hard for me to answer with so many talented people working with me.


If you weren’t working in the restaurant business, what would you be doing?

I really don’t know. I have always been in it. Even though my family isn’t in the business I was always on this path since I can remember. If I had to choose, I guess it would be in a field where I was able to coach and lead a team. That is what I love about the business: bringing a group together and encouraging them to do great things together.


Name an ingredient never allowed in your restaurant.

It used to be cilantro, but while working for Bobby Flay at Mesa Grill, I’d see cases of cilantro chopped every day. I have given that up since I am not running the kitchen day to day.


What is your after-work hangout?

At home with my family. They are my everything.

Diet Gosling’s Ginger Beer. I drink it almost every day.


What would be your last meal on Earth?

I love a great steak. It would be served with foie gras and truffle Madeira, Rossini-style.