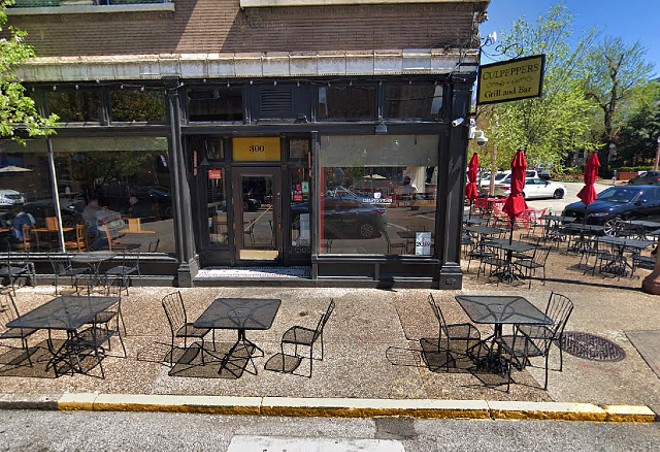 Another longtime Central West End business has announced that it is closing this week, and like its neighbors, it's a casualty of the Saint Louis Chess Club's expansion plans.

After 84 years of business, Culpeppers (300 North Euclid Avenue) in the Central West End closed after service last night, as first reported by KSDK. Located at the intersection of Euclid and Maryland avenues, the restaurant first opened in 1935 and remains locally owned.

News of the closure comes just days after neighboring legacy bar Brennan's announced plans to close and relocate elsewhere in the Central West End. Owner Kevin Brennan told Sauce Magazine that the move is due to the expansion of the Saint Louis Chess Club and that he does not currently have a new building identified. In KSDK's reporting on Culpeppers closing, the Saint Louis Chess Club is said to be leasing the space as well as the spaces that currently house Brennan's and FroYo, which is located between the two.

"The Saint Louis Chess Club, which shares the building with Culpeppers, announced it would be leasing the restaurant's space along with the spaces that are currently home to the adjacent FroYo and Brennan's," KSDK reports. "The Chess Club said Brennan's plans to move to a larger location in the Central West End."

A partner business, Kingside Diner, which is chess-themed, opened on the opposite side of the Saint Louis Chess Club in 2015. (The diner now operates a second location in Clayton as well.) With Kingside, the grouping of businesses has been dubbed the "Chess Campus." That campus may soon extend the length of almost one city block.

Reached by email this morning by the Riverfront Times, a representative from Saint Louis Chess Club confirmed that it is expanding into the spaces previously occupied by Brennan's, Culpeppers and FroYo:

These businesses have been institutions in the Central West End for many years, and we understand that, in particular, Brennan’s loyal patrons will miss the establishment in its current location. We are happy to clarify that, despite reports that Brennan’s is “closing,” this is a growth opportunity for the establishment, which has outgrown its current space. Kevin Brennan is looking to expand his establishment to a larger location still within the Central West End.

Since the Chess Club’s founding 11 years ago, we have been proud of our growth and the increased interest in the game of chess locally and throughout the United States. When presented with the exciting opportunity to expand our campus in the Central West End, we jumped at the chance. The additional space will allow the Saint Louis Chess Club to provide unparalleled exposure, support and educational programming for chess enthusiasts at home and abroad. We look forward to announcing more about how this expansion will benefit this city and region, further solidifying Saint Louis’ role as America’s Chess Capital and as the preeminent global destination for lovers of the game.

Please stay tuned for a formal announcement from the Saint Louis Chess Club with further details at a later date.

Founded by Robinson-Culpepper Inc. more than eight decades ago, Culpeppers got its start as a liquor store, according to a St. Louis Post-Dispatch story published on March 3, 1935. The retail store eventually transitioned into a full-service restaurant; an advertisement in the Post-Dispatch in 1955 promotes it as a pizzeria and cocktail lounge serving "15 varieties of thin, crisp crust."

It wasn't all smooth sailing for the restaurant, though: In 1960, a fire of undetermined origin caused major damage to the bar and adjoining stores and offices. In a classified ad listing Culpeppers for sale that ran in the Post-Dispatch in 1967, the restaurant is described as "long established and profitable. Owner retiring to Florida." The restaurant closed in the early 1970s and was reopened by husband and wife Herb Glazier and Mary McCabe in 1977.

"The venerable name of Culpepper's [sic] will return to the St. Louis restaurant scene next month when Herb Glazier re-opens the Euclid-Maryland spot most recently known as Ginger's," the Post-Dispatch reported that same year.

In 1978, the late, great, Post-Dispatch restaurant critic Joe Pollack named the reopened restaurant one of his favorites in town. "Culpeppers (no apostrophe), which has about the best soups in town and which did have the best steak tartare until Herb Glaser [sic] took it off the menu, claiming that only eight people would order it."

In a 1981 Post-Dispatch story about the best sandwiches in St. Louis, Pollack wrote that Culpeppers stood "head and shoulders above every other similar place in the neighborhood in terms of food. The selection is imaginative, the preparation just right."

In later years, under Glazier and McCabe, Culpeppers became a local destination for hot wings and cold beer, specialities that still drew crowds until its final service this week. The couple sold the restaurant in 1988. When Pollack filed a return visit story in 1992, he found the food and experience of the same quality. "Culpeppers brought Buffalo-style chicken wings to St. Louis, and still does them as well as anyone," Pollack wrote.

Culpeppers has expanded over the years with locations across the St. Louis area, yet with the flagship's closure this week, only one remains: the restaurant at 3010 West Clay Street in St. Charles.

We have reached out to Culpeppers owner Chris Olsen for comment and will update this post if we hear back. More as we learn it.